After a a nearly five-hour meeting, Broomfield City Council voted to indefinitely postpone a vote on an oil and gas moratorium.Council members Sharon Tessier, Stan Jezierski, and Kevin Kreeger voted against the motion, which was supported by David Beacom,... 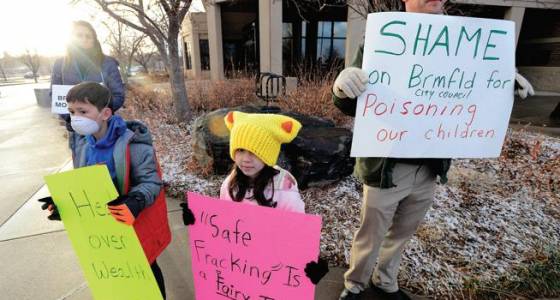 After a a nearly five-hour meeting, Broomfield City Council voted to indefinitely postpone a vote on an oil and gas moratorium.

Councilman Sam Taylor was not present at the meeting.

The City Council also listened to comments from residents Tuesday. Opinions varied, from people vehemently advocating for the moratorium and others asking to postpone or vote against moratorium.

Extraction told Broomfield officials late Monday that it would withdraw its current applications with the Colorado Oil and Gas Conservation Commission if the city's moratorium ordinance was postponed indefinitely or turned down at Tuesday's City Council meeting.

Extraction officials expressed an interest in participating in the Comprehensive Plan update, which will add a section about oil and gas development, and said they then would make a new spacing application filing for an amended drilling plan in the later part of May.

Under the current applications, hearings were scheduled for June 12 and 13.

Several people also wanted in writing the verbal promises made by Extraction Oil & Gas Inc. regarding safety. The promises include building a pipeline, making sites tankless and creating a closed-loop system.

Broomfield City Council heard more than three hours of public comment on the oil and gas moratorium that would halt development until June 13. Residents began gathering in the lobby of the George Di Ciero City and County Building more than an hour before the meeting.

Anthem resident Judy Kelly assured council that her community did not have dozens of speakers tonight. She presented a petition, which they began circulating Sunday evening, and said she was representing the more than 825 people who signed.

She asked that council consider postponing the vote on the moratorium. Residents still feel it's a "strong, powerful tool," but not one that should be used at this time.

Extraction wrote to City and County Manager Charles Ozaki in an email that they anticipate about 12 months between filing new spacing applications and commencement of drilling in the first half of 2018.

Several council members felt that a three-month moratorium would not be long enough if Extraction wants to participate in the update task force process.

Councilman Kevin Kreeger suggested giving Extraction "as much time as they've given us" and postpone the vote on the moratorium three months.

Eric Jacobson, senior vice president of operations with Extraction, said the company would start work on the spacing applications now, or within a few weeks, to get them ready in time for a May submittal.

Councilwoman Liz Law-Evans said the short-term moratorium was never intended to be a long-term solution.

"If I could ban oil and gas development in suburban areas in my hometown, I would do that," Law-Evans said. "But I don't have that power."

She suggested putting the moratorium, which has often been referred to as a "tool," back in the toolbox.

Some residents expressed distrust toward oil companies, and Extraction in particular, and said they felt the company come forward with "misinformation and false truths."

Andrew Conner, who came to the meeting representing his wife and children, came out in strong support of the moratorium.

"Private property rights do not trump the health, safety and well-being of people in Broomfield," he said.

In a related move, activists with Broomfield Clean Air and Water on Monday filed a draft petition to recall Councilman Greg Stokes, the first step to initiating a recall election. The announcement came in a news release from the Front Range Energy Alliance, a citizens group formed as "It's Our Broomfield Too" in 2013 with the "objective of educating and informing the community on the facts related to oil and gas extraction."

For months, BCAW has hosted a web page that invited people to fill out a form if residents were interested in recalling council members who vote against the moratorium.

Susan Speece, Broomfield resident and member of the Anthem Ranch Oil and Gas Education Group, expressed "regret and disappointment" with some of their neighbor's use of "harassment and intimidation" toward council members.

"We don't feel that's an appropriate way to interact with you," she said during the public comment portion of the meeting. "We have always tried to work seriously with you. We don't always agree but we find ways to communicate with each other."

She mentioned city and county staff and named each council member in her show of appreciation.

"You don't hear this enough," Speece said. "Thank you for all you do."

Dan Haley, president and CEO of the Colorado Oil & Gas Association, and Tracy Bentley, executive director of the Colorado Petroleum Council, both came out against passing the moratorium.

Bentley thanked Broomfield council and staff for their work and said she hopes they vote "no" on a continuance and "no" to a moratorium of any kind.

"It's absolutely critical that we continue to work toward a solution," she said.

John Dulles, who lives in the McKay Landing area, introduced himself as a resident, "not a paid protester" — a disclaimer several speakers felt they needed to proclaim.

He recommended postponing the moratorium because Broomfield "may need it down the road."

Dulles asked council how Broomfield views itself, and how it wants to market itself — its "quality of life, great schools, great place to raise families, recreation and open space, health and safety."

While he understands Broomfield is in a difficult position, and has worked hard on this issue to mitigate for safety, Dulles doesn't believe oil development should be so close to neighborhoods.

"I like landscaping and I like butterflies, but I like clean air and water more," Dulles said, getting a huge burst of applause when he walked back into the lobby.