The Boulder County Sheriff's Office confirmed that they removed marijuana plants from the Coal Creek Canyon house where three people were found dead on Saturday.The bodies of Wallace White, 54, Kelly Sloat-White, 56, and Emory Fraker, 39, were found by sheriff's... 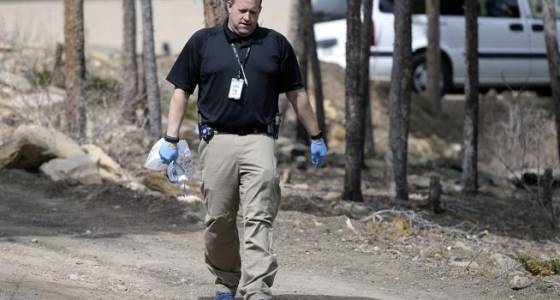 The Boulder County Sheriff's Office confirmed that they removed marijuana plants from the Coal Creek Canyon house where three people were found dead on Saturday.

The bodies of Wallace White, 54, Kelly Sloat-White, 56, and Emory Fraker, 39, were found by sheriff's deputies in a home at 800 Divide View Drive on Saturday.

No suspects or motive have been revealed at this time. While investigators said they did not know if it was related to the killings, the sheriff's office had previously said there was "drug activity" at the home.

On Wednesday, Boulder County sheriff's Cmdr. Mike Wagner confirmed that deputies removed "a number of marijuana plants" from the home, though he could not comment on how many or what, if any, role it played in the deaths.

"Detectives are continuing to interview witnesses, follow up on leads and analyze evidence," Wagner said.

Wagner did say that deputies did not have any calls for service at the house in the past three years, the length of time the office keeps call records.

As the investigation continues, neighbors are still trying to wrap their heads around what could have brought violence into their quiet, isolated neighborhood.

Officials have said the public is not at risk because the house was " specifically targeted," but that doesn't mean residents aren't still a little on edge.

"I guess it's not something the neighborhood has to worry about, except it's like, 'Targeted for what?'" said Orrin Snyder, who lives on nearby Camp Eden Road, but did not know the victims. "We've been locking our doors and being a little extra cautious."

Sitting in the lobby of the Eldora Lodge, Snyder said nobody seems to know anything about the victims or why they were killed, but the case was still all people in town have been talking about.

"When something like this happens, it is unsettling," Snyder said.

Investigators said there was drug activity at the house, but are still trying to determine if that played a role in the motive.

White and Sloat-White are married and are the owners of the house, and Fraker, of Broomfield, was Wallace's brother.

Mike Parks, owner of A Better Garage Door in Broomfield, knew the Whites for 15 years before they moved up to the mountains. He said he hasn't spoken to them after they sold their customer contact list and phone number to Parks seven years ago.

The couple operated out of their Broomfield home, Parks said, which they sold at the same time as their business, Action Door. He only knew them on a professional level, but said they were "nice, hardworking folks." Fraker worked with them at the garage door company.

They tended to keep to themselves back then, Parks said.

"That's why they moved up there," he said. "To get away from everything."

Mary Jo Triolo, Fraker's mother, was reached Wednesday, but declined to comment. She said the family is still in shock.

Steve Dickson, who lives a few houses down from the Whites on Divide View Drive, said he knew the couple, though not that well.

"They were nice people; very private," he said.

Dickson said they moved into the neighborhood a little more than five years ago after getting a good deal on the house, which was distressed. Property records show the Whites bought the house for $343,000 in 2010.

"Everybody knew it was for sale (when they bought it)," Dickson said. "I kind of assumed they were retired and were just looking for a place."

Dickson said he has only been to the house once, when neighbors went over shortly after they moved in to help with wildfire mitigation on the property. But he said he never went inside the home.

"It was stripped, and I think they were embarrassed," Dickson said. "They were still just trying to get everything in."

Dickson didn't know Fraker, and had never seen him around. In fact, he didn't even see much of the Whites simply because the area was so isolated.

"I can maybe see their roof," he said. "It's not like we can hear each other flush."

Deputies asked Dickson if he saw any suspicious vehicle traffic in recent weeks, which he said he did not, though he pointed out vehicles could get to the Whites' residence from the main road without passing his home.

"I have a home office look out the window," Dickson said. "I would have seen that."

While he couldn't comment on whether it has impacted this case specifically, Wagner said that isolated crime scenes can be a challenge.

"It typically makes criminal investigations harder, just because there are less witnesses in the area," Wagner said. "If something were to happen in an urban, heavily populated area there is a higher likelihood people would see something. It's a different dynamic in an more rural area."