Benefield: Too much home-field advantage? 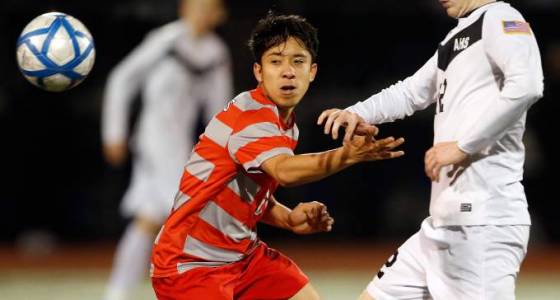 Home is where the heart is.

It is also where the supportive crowd is, where the snack bar profit is and where the home announcer is. Home is where the warm-up music is familiar and the comfort level is high, where the playing surface is known like the back of one’s hand and where chanting from the crowd is decidedly friendly.

There may be debate about whether it is right and proper to host a North Coast Section championship game on the campus of one of the participating teams instead of a third-party site, but there is no debate over whether playing at home is an advantage for one team over another.

“Personally, I don’t like the idea of playing the NCS championship game at a home school site,” said North Bay League commissioner Jan Smith-Billing. “I think it gives an unfair advantage for the home school.”

Whether it was the home field or something else, the No. 2 seed Acalanes Dons came away with the NCS Div. 2 boys soccer champions’ plaque Saturday night, beating the No. 5 seed Montgomery Vikings 1-0 in double overtime. The game was played on the Dons’ home field in Lafayette, about 70 miles from Montgomery’s campus.

In other boys’ championship games, no team played on their home field. The Div. 1 game between No. 5 Berkeley and No. 3 De La Salle was played at Dublin High (which was the 11th seed). Dublin High is 29 miles from Berkeley and 22 miles from De La Salle. The Div. 3 game between No. 1 University and No. 2 Marin Academy was played at Beach Chalet Fields in San Francisco, a 5.2-mile drive from University and an 18-mile drive from Marin Academy. University played at Beach Chalet three times this season, once as visitor and twice as the home team, but they also have a campus field.

In Div. 2, Acalanes officials offered their campus as potential host for the final game. No other area school did, officials said.

“In this case, nobody signed up in the geographical area of Acalanes to be a designated site,” Smith-Billing said. “According to Karen (Smith, North Coast Section associate commissioner), the only place left to play in the area was Acalanes. That’s just the way it turned out. It’s unfortunate.”

“Not to take away from Acalanes,” she said. “It was an incredible game.”

That it was. It was a scoreless tie after 80 minutes of regulation. Still tied at zero after the first golden goal overtime period, the teams went to a second 10-minute period. With two minutes to play, the Dons got the game winner. Scores of students flooded the field in celebration as many of the Vikings collapsed in despair.

And then the Vikings, and their band of supporters, were faced with a 90-minute drive home.

“I think it’s a huge advantage to be on your home field. I speak from experience; we were undefeated on our field this year. Nobody beat us,” said Vikings coach Jon Schwan.

Schwan admits it’s a pretty good problem to have — debating where the championship game should be held. But he contends that after a playoff run in which the higher seed always plays at home against presumably weaker opponents by way of seeding, the advantage to playing the biggest game of the season on home turf is just too great, that a neutral site for the final game makes more sense.