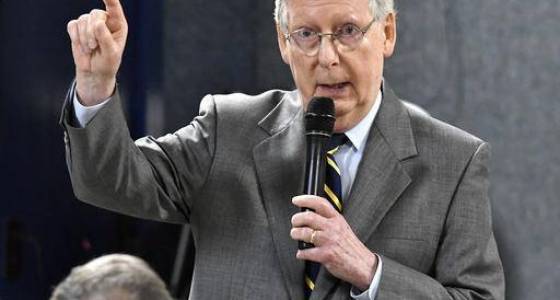 URBANDALE, Iowa -- When hundreds of angry constituents chanted "no wall" at his Iowa town hall, Republican Rep. David Young agreed it wasn't necessary. When they demanded that President Donald Trump release his tax returns, the second-term congressman called it a "no-brainer." And, when they yelled at the mention of White House adviser Steve Bannon's name, Young quickly replied: "I don't know much about him."

"On the subject of the president, I want you to know that although he's the president, he's not my boss," the lawmaker said, struggling to be heard over yet another round of raucous chants that echoed across the suburban Des Moines auditorium.

Just call it the Trump tango.

A little more than a month into Trump's term, Republicans like Young find themselves squeezed between a polarizing president and hundreds of angry voters flooding their Capitol Hill phone lines, protesting at their offices and shouting them down at rowdy town halls. The national pushback has left some Republicans wary, complicating Trump's ability to get his agenda through Congress and raising the possibility that midterm elections that should favor the GOP may end up being far more challenging.

"You can't write the protesters off simply because they've got loud voices," said Republican pollster Neil Newhouse. "That's kind of what the Democrats did in 2009. They wrote it off then as astroturf. If we do the same thing in '17 and '18 we could be paying the price in November."

Trump has made it clear that he has little intention of changing his approach, dismissing what he described on Twitter as "so-called angry crowds" in Republican districts that have been "planned out by liberal activists." Republican leaders label the protesters sore losers, unhappy with the results of the November elections.

"You all are surely not falling for the notion these are unbiased citizens," Senate Majority Leader Mitch McConnell, R-Ky., told reporters in Covington, Kentucky, this week.

Congressional GOP leaders plan to stay the course, pushing ahead with repeal of the health care law, overhaul of the tax system and other efforts to roll back former President Barack Obama's policies despite the outcry.

But the rowdy town halls and protests may make it more difficult for some of their more moderate members to support the proposals.

Some Republicans skipped town halls altogether. Those who did appear used the events as an opportunity to hedge their support for Trump's and the congressional leadership's agenda - calling on the new president to release his tax returns, provide greater transparency on his dealings with Russia, striking a more moderate tone on "Obamacare" and even offering some veiled criticism of Trump's chaotic style.

"I said this at the meeting: No one would confuse my personality with Donald Trump. And I am comfortable with my own personality," said Rep. Leonard Lance, R-N.J., who had more than 1,150 people show up for a town hall in his swing district on Wednesday night. Typically, his events get around 100 attendees, he said.

Some of the divides between Trump and the GOP date to the contentious 2016 election, when much of the Republican establishment tried to stop the populist Trump from winning the nomination.

"It's inevitable that the agenda remains in flux because Donald Trump has not reflected the dominant views of most Republicans and conservatives," said Republican pollster Whit Ayres, a veteran adviser to Republican Senate campaigns who worked on Florida Sen. Marco Rubio's presidential bid.

But much of the outrage has focused on the yearslong Republican pledge to eliminate the Affordable Care Act. With polls showing the law becoming more popular since Trump's election, Republican lawmakers are struggling to respond to constituents worried about losing their coverage, even as an energized GOP base demands a swift - and complete - repeal.

Though he'd backed repeal efforts when Obama was in office, Young now finds things to like about "Obamacare." Popular provisions like allowing adult children to remain covered by their parents' insurance and barring denial of coverage based on pre-existing conditions are part of what makes the law difficult to uproot, he told the shouting crowd at his town hall.

The outcry among angry voters was part of what convinced Iowa Republican Sen. Chuck Grassley to endorse the simultaneous repeal and replacement of the health care law, where he had said just weeks earlier that he would be willing to pull the plug on the law without an alternative in place.

"That wouldn't have meant much to me in November and December, but it means a lot now," Grassley told reporters after an hourlong meeting with more than 100 Tuesday in rural northern Iowa.

And Alaska Sen. Lisa Murkowski said this week in her annual speech to the Alaska Legislature that she would not vote to defund Planned Parenthood or repeal the healthcare law's expansion of Medicaid - contradicting two GOP election-year promises.

Those kinds of town hall promises could complicate Republicans ability to get a replacement plan through Congress - a prospect that cheers Democrats.

"If Obamacare repeal fails and there's similar turmoil around taxes in the Senate, it can turn out to be a very unproductive year for Republicans," said Democratic pollster Geoff Garin. "The die is often cast very early in midterm election cycles."