2017 NFL free agency: The Bucs have cap space, but here's why they don't have to spend

DeSean Jackson. Calais Campbell. Tony Jefferson.3 Weeks Ago1 Month Ago1 Month Ago Coming to a stadium near you?When the free agent frenzy begins next week, the Bucs have the resources to land those big names. They'll be armed with about $70 million in cap... 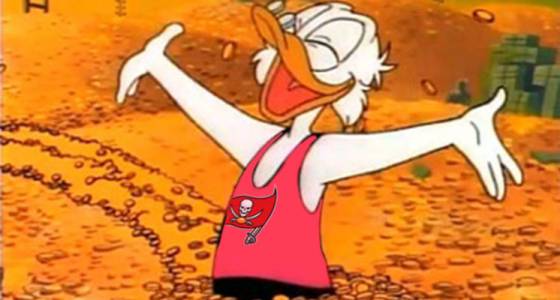 Coming to a stadium near you?

When the free agent frenzy begins next week, the Bucs have the resources to land those big names. They'll be armed with about $70 million in cap space.

Here's the thing, though: They don't have to spend any of it. Not a cent.

That's because teams aren't required to spend a minimum amount of cash in any given season. A salary floor exists, but it's flexible.

Think of it this way: Teams manage the salary cap like you manage your diet. It's all about delaying gratification. Skipping the glazed donut in the morning makes it okay to order the bacon cheeseburger at lunch … doesn't it?

The Bucs and the "89 percent rule"

Will the Glazers sit out free agency and spend their March afternoons swimming in their spare cash like Scrooge McDuck? If their approach in recent offseasons is any indication, no.

Since 2013, they have spent at least 94 percent of the league salary cap, according to Over the Cap, a site that tracks NFL contracts. Note that while these amounts appear to be exact, they are gathered from various sources and might differ from the Bucs' actual figures.

On the surface, it appears the Bucs spend freely. What happens in one offseason, though, can sometimes bleed into the next, as was the case in 2014 and 2015.

In 2015, Tampa Bay paid for the mistakes of past signings. The Bucs cut Johnson and Collins and traded safety Dashon Goldson — and ate $14 million to do so. Had they retained those players, they would have been on the hook for millions more. Basically, they chose to burn one pile of cash instead of burning two. They went on to win six games.

Free of their 2014 commitments, the Bucs had room last offseason to chase the market's top defensive end and cornerback. Instead, they settled on Robert Ayers and Brent Grimes, signing them to what were essentially one-year contracts with a team option for a second. The plan to replace Logan Mankins with J.R. Sweezy at left guard, however, was a flop (Sweezy received $9.5 million; he didn't practice once). They went on to win nine games.

The Bucs don't have to look outside the gates of One Buc Place for case studies on free-agent spending. Their experience is all the evidence they need. Spending doesn't ensure success; it often hinders it.

After the Bucs earned their first winning season since 2010, expectations are high, especially for Jason Licht, who will be entering his fourth season as the team's general manager. It is tempting to believe Tampa Bay is a few upgrades away from the playoffs, and maybe more.

If that's what you choose to see, you'll cite last season's Giants and Raiders teams as proof that free agency works. Both reached the postseason (and played exactly one more playoff game than the Bucs). That line of reasoning overlooks a couple of key points: 1.) Eli Manning is in his mid-30s, so New York is in win-now mode. 2.) Oakland was under the 89 percent spending threshold heading into 2016, so it had to spend. Plus, the Raiders' rise coincided with Peyton Manning's retirement and the decline of the Broncos.

Tampa Bay is in no such position — it has a 23-year-old quarterback, and it is not obligated to spend. In fact, there are benefits to exercising restraint.

Rather than risk significant dollars on players from outside the organization, the Bucs might choose to lock in their own. Mike Evans, who has averaged 79 catches, 1,193 yards and nine touchdowns over his first three seasons, won't be an unrestricted free agent until after the 2018 season, but he and the team are free to discuss an extension now. Both sides have time, but Tampa Bay will want to set aside money for a potentially massive deal in line with the contract Steelers receiver Antonio Brown signed this week. (While the four-year extension worth $68 million makes Brown the highest-paid receiver by annual average value, it's unlikely that he'll be running routes in Pittsburgh in 2021 under present terms.)

Whatever cap space the Bucs don't use this offseason, they can roll over to next, when tight end Cameron Brate and receiver Adam Humphries will be restricted free agents and due for raises or long-term extensions.

Looking ahead to 2019, linebacker Kwon Alexander can become an unrestricted free agent, and quarterback Jameis Winston — assuming Tampa Bay picks up the fifth-year option on his rookie contract — will be on the verge of hitting the open market. If the Bucs aren't on pace to meet the CBA's 89 percent spending requirement then, they certainly will be once they hammer out an extension for their quarterback. You'll be glad they saved.

The difference between cash spending and cap hits

A point of clarification on the 89 percent rule: It applies to a team's "cash spending," not the total of its players' "cap hits."

What's the difference? Consider cornerback Vernon Hargreaves' contract. After the Bucs selected him in the first round of last year's draft, he signed a four-year, $14.2 million deal with a signing bonus of $8.5 million. While signing bonuses are paid up front, they are prorated over the life of the contract.

A second point of clarification: The Bucs don't give signing bonuses to veteran free agents. They do, however, offer roster bonuses, lump sum payments that — unlike signing bonuses — count against the cap only in the season in which they are paid. To receive the payment, the player must be on the team's roster as of a specific date. While this can result in higher cap hits early in a player's contract, it ensures the team isn't saddled with dead money if it chooses to release the player before the final season of the contract.

Let's look at how the Bucs structured offensive guard J.R. Sweezy's contract, which was originally reported as a five-year, $32.5 million deal:

The $18 million due after 2017 is not guaranteed, which makes this a two-year, $14.5 million contract. Yes, the Bucs can walk away after this season and not owe Sweezy anything.

Why do teams and players structure contracts like this? I don't know. Why do you add a couple of inches to your height on your eHarmony profile?