JERSEY CITY -- "This is not just about bathrooms."  That was one of the messages emphasized by nearly 200 people who rallied at the Newark Pedestrian Plaza in Jersey City in support of transgender rights.  Last week, President Donald Trump... 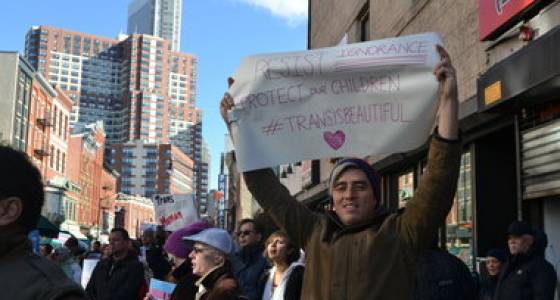 JERSEY CITY -- "This is not just about bathrooms."

That was one of the messages emphasized by nearly 200 people who rallied at the Newark Pedestrian Plaza in Jersey City in support of transgender rights.

Last week, President Donald Trump ended federal protections that would allow students to use the bathroom that matches their gender they identify with. Now, individual states and school districts will be allowed to determine which facilities students can and cannot use.

Many holding signs and carrying flags chanted "when trans youth are under attack, what do we do? Stand up fight back."

Michael Billy, co chair of Jersey City LGBT Pride, who organized the rally with Garden State Equality energized the crowd on a chilly afternoon saying "this is not just about bathrooms as it was not just about fountains."

"Every single day when we stand together for our trans youth, we make a promise, we make a pledge that we will not turn a cheek," Billy said. "That we'll continue standing up for each other."

Rebekah Bruesehoff, a 10-year-old transgender girl from Vernon, stood on the stage beside her mother, Jamie, saying she is "just a girl," which received cheers of support from those in attendance.

It was the first time Rebekah, who said she transition two years ago, spoke at a rally like the one in Jersey City. She told The Jersey Journal it was a fun experience.