CaptionCloseNEW YORK (AP) — Cookie dough is having its Cronut moment.People have been standing in line for up to three hours at a month-old New York City shop that sells scoops of raw dough in a cup or a cone like ice cream.The sweet treat has become... 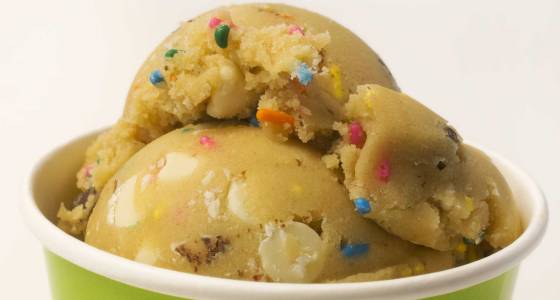 NEW YORK (AP) — Cookie dough is having its Cronut moment.

People have been standing in line for up to three hours at a month-old New York City shop that sells scoops of raw dough in a cup or a cone like ice cream.

The sweet treat has become the latest food fad to generate buzz and long lines on the sidewalk, following the Magnolia Bakery cupcake popularized by "Sex and the City" and the Cronut, the croissant-doughnut mashup that made pastry chef Dominique Ansel's Manhattan bakery a phenomenon among foodies and tourists and ultimately inspired mass produced knockoffs.

Kristen Tomlan, the 28-year-old founder of DO Cookie Dough Confections, said she's selling 1,500 pounds of cookie dough a day at her Greenwich Village storefront and hopes to expand both in New York and online.

"It's really cookie dough gone wild," said Tomlan, who grew up in St. Louis and has a background in design and branding.

The name of the business, DO, is pronounced "dough" and rendered with a line over the O indicating a long vowel sound.

About 30 people were lined up across the street when the shop opened at 10 a.m. Tuesday.

Nancy Lerman, who works nearby, said she's been twice before and tried most of the flavors, which include chocolate chip, red velvet and peanut butter snickerdoodle.

"I just think it's yummier," Lerman said. "I don't eat a lot of cookies but I would eat cookie dough."

New York University student Alex Day joined the line in hopes of sampling the dough for the first time. Day said she's always loved raw dough and figured the people lining up outside DO must be on to something.

"I'm sure it'll be really good if people are waiting this long for it," she said.

Inside the shop, some of Tomlan's 50 employees were busy measuring baking soda and mixing butter, sugar and flour to keep up with the demand.

Tomlan said her products are made with heat-treated flour and pasteurized eggs so they can be eaten raw. The store sells baked cookies as well as raw dough, which keeps for three weeks in the refrigerator and three months in the freezer.

Food trend watchers said raw dough may be a flash in the cookie pan.

"This has been the downfall of numerous juice chains and yogurt chains before them and other single-item wizards before that," Whiteman said.

Darren Tristano, president of Chicago-based food consulting firm Technomic, said that if DO succeeds, competitors will likely rush to copy it, diluting the appeal of the original.

But Tristano is not surprised that people are waiting in line for raw dough.

"Waiting in line when it's not a necessity is a lot easier than it was 10 or 20 years ago," he said. "Today you have a device in your hand. You can be incredibly productive waiting in line. Whereas 20 years ago nobody waited in line unless they had to."