Instead of standing on the stage, a teen honors a mom during a graduation photo shoot 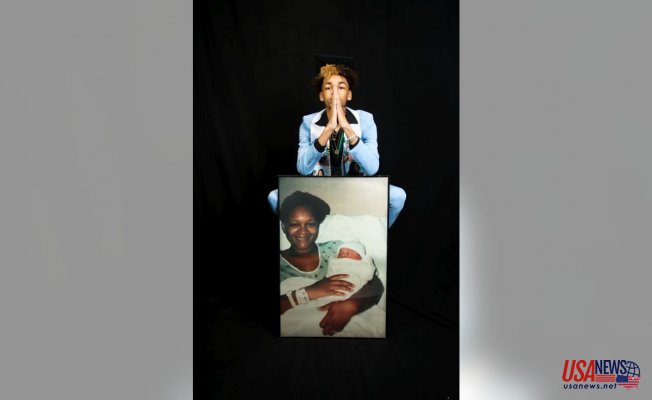 After receiving his diploma almost a year earlier than expected, a recent high school graduate was able to honor his mother.

Kentavius "KJ" Morgan, 17, celebrated his academic achievements and his mother's life with a one-of-a-kind photo shoot.

Morgan's mother, Teresa Colbert died of cancer on May 12, 2019. This is a date Morgan will never forget, as it also happened on Mother's Day in 2019, KJ stated.

"My mom was my best friend. KJ stated that she was my only friend. "I was devastated when she died like that."

KJ was determined to cope and enrolled in college and high school classes during his junior year. He also worked part-time as a hair braider.

Morgan attended Northside High School, Warner Robins, Georgia during his regular school hours. Morgan would continue his college studies at Central Georgia Technical College through a dual enrollment program. He could do this whenever he had the time, whether it was during school hours or winter breaks.

KJ stated that he received 26 college credits through dual enrollment and graduated high school in July, 10 months earlier than he was supposed.

KJ organized a photo shoot, which included a custom graduation stole, large printout and photographs of his mother.

KJ said to Fox News that he chose private photo shoots because he remembered his mother saying she would cheer him on.

KJ stated that he didn't want to attend a graduation ceremony. "I didn’t want to walk at any point because it was going to eat my inside - being on that platform."