BRUSSELS, -- This was supposed be Christmas in Europe. It would allow family and friends to celebrate the holidays together. The COVID-19 pandemic is now centered in Europe, with cases soaring to unprecedented levels in many countries. 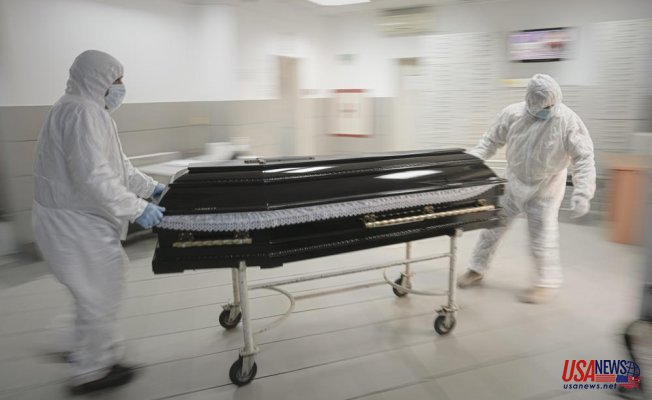 BRUSSELS, -- This was supposed be Christmas in Europe. It would allow family and friends to celebrate the holidays together. The COVID-19 pandemic is now centered in Europe, with cases soaring to unprecedented levels in many countries.

Despite nearly two years of restrictions on infections, infections are spiking again. The health crisis is increasingly pitting citizens against each other -- the vaccinated against those who have not been vaccinated.

In an effort to protect overburdened healthcare systems, governments have imposed restrictions on vaccination options in the hope of increasing the number of vaccines.

Alexander Schallenberg, Austrian Chancellor, stated that he and others believed it was possible to convince people to get vaccinated in Austria.

The move was described by him as "our only hope to break the vicious cycle of lockdown discussions and viral waves for good."

Although Austria is the only country in Europe that makes vaccinations compulsory, there are more and more countries taking action.

Slovakia will ban people who aren't vaccinated from shopping malls and nonessential shops starting Monday. They will also be forbidden from attending any public gatherings and required to be vaccinated twice per week to be allowed to work.

Prime Minister Eduard Heger warned that "a merry Christmas doesn't mean a Christmas without COVID-19." Slovakia must have a different vaccination rate in order for that to happen.

He described the measures as "a lockdown for unvaccinated people."

Slovakia, home to only 45.3% of its 5.5 million inhabitants, has reported a record number of new viruses on Tuesday, with 8,342 cases.

Not only countries in central and eastern Europe are being affected by this new crisis. The west's wealthiest nations are also being affected and are imposing new restrictions on their population.

Angela Merkel, German Chancellor, stated that "it is absolutely time to act." Her nation has a vaccination rate in excess of 67.5% and is considering mandating vaccinations for health professionals.

Lothar Wieler (head of Germany's disease prevention agency), said Friday that "all of Germany is one large outbreak." "This is a national emergency. We must apply the emergency brake.

The unvaccinated are also being targeted by Greece. The Prime Minister Kyriakos Mitchells announced a series of new restrictions for unvaccinated people late Thursday. They will be barred from bars, restaurants and cinemas as well as museums, theatres, museums, and gyms.

Mitsotakis stated, "It's an immediate act to protect and, of course it is an indirect urge, to be vaccinated."

Clare Daly from Ireland, a European legislator and member of the European parliament’s civil liberties & justice committee, is furious at these restrictions. She claims that countries are violating individual rights.

"In a number of cases member states are excluding persons from their ability to get to work," Daly stated, calling Austria's restrictions for the unvaccinated that preceded Friday's decision to impose a complete lockdown "a frightening situation."

She said, "There's almost hatred speech being whipped up towards the unvaccinated."

There have been mandatory vaccinations for many diseases, including smallpox or polio in the world over time. Despite a staggering global COVID-19 death rate of over 5 million and overwhelming medical evidence that vaccines greatly protect against serious illness or death from COVID-19, some parts of the population remain staunchly opposed to vaccinations.

Professor Paul De Grauwe of London School of Economics countered, "No single individual freedom can be absolute." He wrote that "the freedom to not be vaccinated must be limited in order to guarantee the freedom for others to enjoy good-health," as he stated in a letter to Liberales.

This principle now applies to European countries, dividing families and turning friends against each other.

Birgitte Schoenmakers is a general practitioner who also teaches at Leuven University.

She said, "It has become a battle between people."

She is aware of political conflicts that are sparked by conspiracy theories being spread, but she also sees people telling deeply human stories. Because she hates getting vaccinated, one of her patients was kept out of her parents' home.

Schoemakers stated that, while authorities have long resisted the idea of mandatory vaccinations due to the high-infectious delta variant, they are now open to the idea.

She said, "It is extremely difficult to make a U turn on this."

Europe is experiencing a second consecutive grim holiday season due to sprinkling infections and reining them in.

Leuven already cancelled its Christmas market. In Brussels, a 60-foot Christmas Tree was placed in the centre of the Grand Place. However, the virus surge will determine whether or not the festive market in Brussels can proceed.

Paul Vierendeels, the tree's donor, hopes to see a return of traditional Christmas.

"We are happy to see that they are making an effort to decorate the tree and put it up. He said it was a good start. "It is a relief that after almost two years of difficult years, some things are happening again, which I consider more normal in life."