Who knew 'Arrival' could be so topical?

Amy Adams' character in "Arrival" ascends on a vertical lift through a hole in the alien spacecraft, and gravity suddenly shifts sideways. When she finally sees the creatures, they're behind glass, obscured by fog -- looking like enormous black hands... 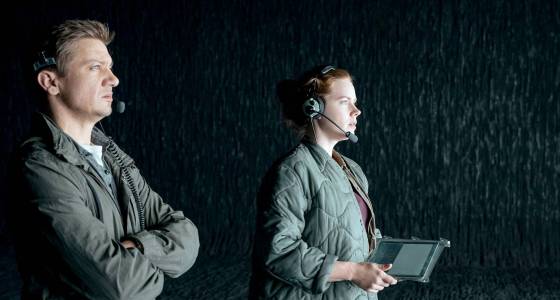 Amy Adams' character in "Arrival" ascends on a vertical lift through a hole in the alien spacecraft, and gravity suddenly shifts sideways. When she finally sees the creatures, they're behind glass, obscured by fog -- looking like enormous black hands with seven fingers, purposefully designed by the filmmakers to be not-so-human.

Beyond the special-effects wizardry, the scene is a reminder that the word "alien" shares a root with the Latin "alius," meaning "other." The film, it turns out, is about overcoming divides not only between species, but also among nationalities, as Adams's linguist character works with colleagues from China, Russia and other countries where the oblong ships have been parked to figure out the aliens' pictographic language.

These themes in Denis Villeneuve's film, nominated for best picture and seven other Oscars, became especially resonant after the election of a strongly America-first president in a deeply divided nation, and are even more so now, amid immigration crackdowns. And, as the film shows, science fiction has a knack for helping us sort out our feelings about those different from us.

"It's turned out to be loaded with political commentary," "Arrival" producer Shawn Levy says of the movie's reflection of the immigration issue, "something our filmmaking team doesn't regret, but this was largely unanticipated."

The film's political themes were intended to be more timeless. "The movie was always a commentary on a world that is often prone to fracturing," Levy says. "It invests in the faith that cooperation among nations beyond borders can lead to global benefits."

Daniel W. Drezner, a professor of international politics at Tufts University in Boston and the author of "Theories of International Politics and Zombies," says science fiction movies like "Arrival" can be viewed as commentaries on his field. (Some spoilers ahead.) Realism -- the theory of international relations as a power-wielding, zero-sum game -- shows up in George Romero's zombie movies and in "Independence Day," about a human-alien war, Drezner says.

Dr. Louise Banks, Adams' character in "Arrival," eventually realizes that the aliens view diplomacy as a "non-zero-sum game," like liberalism, which argues that cooperation among nations leads to mutual benefits. The film also embodies constructivism, the view that differences result from such socially constructed norms as language.

"You could argue that the aliens are trying to socially construct a norm of cooperation among the countries involved," Drezner says, so that humans will later help the aliens, who can see the future.

Drezner, who is also a Washington Post contributor, says that although the film doesn't get everything right about international relations -- for one, the United States cuts off communication with other nations too hastily -- it does show how language matters. One plot point hinges on how an alien image is translated. Similarly, Drezner says, a big step in Russian President Vladimir Putin's relationship with President Donald Trump came when he gave Trump a compliment that was translated in some reports as "brilliant," and Trump interpreted as "genius," but is closer to "colorful, vivid or flamboyant," according to the Guardian. Putin later clarified that he had meant "bright."

Movie creatures have been echoes of the "other" since at least the 1930s, when the Flash Gordon serials' villain Ming the Merciless was a "yellow peril" stand-in for our fears of Asian immigrants. In 1951, "The Thing From Another World" was a Cold War analogy. Later, "Star Trek" often commented on race relations.

Other sci-fi films more explicitly reference immigration -- such as 2009's "Sleep Dealer," in which our Southern border is walled off, but people in Mexico can still work in the States by piloting robots who do construction work or clean houses. Even the comedy "Men in Black" plays on the double meaning of "alien" -- in the opening scene, a man who appears to be an undocumented immigrant smuggled in a truck turns out to be an extraterrestrial in disguise.

A prominent example of sci-fi weighing in on cultural divides is 2009's "District 9," an apartheid analogy in which the protagonist, Wikus, heads an effort to relocate the "prawn"-like aliens from their Johannesburg ghetto before his sympathies shift.

Terri Tatchell, who wrote that film with director Neill Blomkamp, notes that in "District 9," "Arrival" and even 1986's "The Fly" -- one of her inspirations -- the human protagonist takes on characteristics of the other creatures, which helps them see the nonhuman side.

To Tatchell, the appeal of science fiction is less about global politics and more about how characters respond to unfamiliar situations. "My take-away is always a little more personal than all-encompassing. To me it's all about empathy and what can you do to make change, what can you do if you were suddenly in that situation."

Jay Telotte, a Georgia Tech professor who studies science fiction film and TV, says that political metaphors can be found in genre films of all sorts. In Westerns and musicals, he says, "the same thing happens -- you find ways of displacing your anxieties and putting them into this other form. It's not as threatening, and certainly it's not as polemical."

The HBO series "Westworld," a sci-fi and Western mash-up, is a kind of meta-take on this displacement, depicting a future in which humans sign up to live in a Western environment where the characters are played by robots -- another popular sci-fi version of people other than us.

Telotte cautions that no matter how topical these films might be, they're unlikely to create big changes. "Movies never solve problems," he says. "We go to films that make us feel better about the things that are bothering us."

Films can create smaller effects, notes Lisa Yaszek, a Georgia Tech professor who studies science fiction. "The Day After Tomorrow," the 2004 film about a new Ice Age, "compresses the timeline of global warming into a ludicrous framework," she says, but helps to dramatize an abstract issue.

"Scientists will invoke science fiction films to argue for or against certain lines of research," she says. "A nanoscientist will say, 'The work I do is not science fiction. It's nothing like Michael Crichton's "Prey." You shouldn't be worried about nanoswarms.' "

"Arrival's" Levy recently sat in a Hollywood editing studio working on Season 2 of another sci-fi producing project, the Netflix series "Stranger Things," when the creators of the show, the Duffer brothers, barged in to show him a video from the floor of the U.S. House of Representatives.

"Like the main characters in 'Stranger Things,' we are now stuck in the 'Upside Down' -- right is wrong, up is down, black is white," Rep. David N. Cicilline, D-R.I., announced, referring to the series' parallel dimension, next to a poster saying "Trump Things" in the show's logo.

"Like Mike, Lucas, Dustin and Eleven, we must remain focused on the task at hand and hold this administration accountable," Cicilline added.

"Unbelievable," Levy says. "To permeate culture in a way that helps people process life and current events -- and I very much feel 'Arrival' has done the same thing -- it's a little surreal.

"If that congressman was able to get his message across to a dozen people who might not otherwise have it resonate, that's pretty satisfying."