For all the people who have screwed up in public, botched beyond belief, lived through that “Wanna Get Away?” moment, Sunday night’s Academy Awards was for you.Steve Harvey, Bill Buckner, John Travolta, Mariah Carey and all the other... 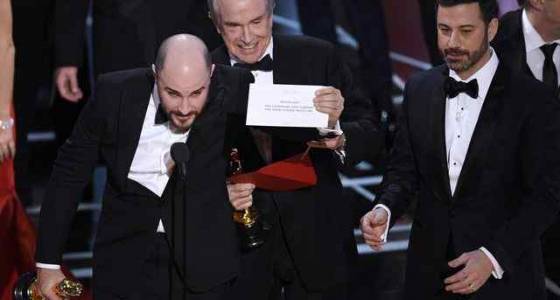 For all the people who have screwed up in public, botched beyond belief, lived through that “Wanna Get Away?” moment, Sunday night’s Academy Awards was for you.

Steve Harvey, Bill Buckner, John Travolta, Mariah Carey and all the other public bunglers are waking up this morning feeling a little better because their gaffes didn’t happen in front of 35 million Americans and another gazillion people around the world.

The Miss Universe Twitter account was priceless Monday morning: Have your people call our people — we know what to do.

To recap: Sunday night in the most dramatic moment of the Oscars telecast, Warren Beatty was handed the wrong envelope. He looked befuddled, stalled, delayed some more, then shoved the envelope toward his “Bonnie and Clyde” co-star Faye Dunaway. Instead of saying that a mistake had been made, Dunaway named “La La Land” as the winner for best picture.

For the next 2 minutes and 21 seconds, “La La Land” music played, “La La Land” acceptance speeches were made, and then, suddenly, the mistake was announced. An unnamed guy with a headset scrambled around the stage grabbing red envelopes trying to figure out what happened.

“Moonlight” was the actual best-picture winner. And Truman actually beat Dewey (no thanks to the headline in the Chicago Daily Tribune), and Miss Philippines actually beat Miss Colombia in the Miss Universe pageant, and George W. Bush actually beat Al Gore in the Florida primary.

The Academy Awards provided its audience with either the greatest worst ending or the worst greatest ending of all time.

Only in La La Land.

President Donald Trump, who was the butt of many jokes during the Oscars broadcast, told Breitbart News that the gaffe could have been a product of a lack of concentration on getting the show right.

“I think they were focused so hard on politics that they didn’t get the act together at the end,” Trump said in the interview. “It was a little sad. It took away from the glamour of the Oscars. It didn’t feel like a very glamorous evening. I’ve been to the Oscars. There was something very special missing, and then to end that way was sad.”

Did PricewaterhouseCoopers, the accounting firm that is supposed to make sure stuff like this doesn’t happen, make the biggest mistake ever? The company said partner Brian Cullinan pulled the envelope from the wrong pile, and some published reports said Cullinan tweeted a picture of Emma Stone — whose best-actress envelope Beatty and Dunaway received — a few minutes before they went onstage to present the final award of the night.

Here are a few of the most memorable public blunders to compare to last night’s memorable flub. In no particular order:

2. Adele f-bombed the Grammys after she messed up in her tribute song to George Michael.

3. John Travolta tried to introduce Idina Menzel at the 2014 Oscars. The name he actually said was Adele Dazeem.

4. Even Sunday night’s Oscars had another oops moment. In the “In Memoriam” segment honoring the stars we lost, the picture of movie producer Jan Chapman appeared with the name Janet Patterson. Chapman is still very much alive.

5. Who can forget Red Sox first baseman Bill Buckner allowing an easy grounder to go through his legs during the World Series that the Red Sox lost to the Mets?

7. Mariah Carey couldn’t sync up with her own recorded voice on New Year’s Eve.

8. Jennifer Lawrence nearly face-planted at the Oscars in 2013.

9. It’s an oldie, but a goodie. Remember the time Vice President Dan Quayle tried to tell a 12-year-old that he had left an “e” off the end of the word “potato.”

10. In 2007, Miss Teen South Carolina was asked how to improve American students’ knowledge of geography: “I personally believe that U.S. Americans are unable to do so because, uhmmm, some people out there in our nation don’t have maps and uh, I believe that our, I, education like such as uh, South Africa, and uh, the Iraq, everywhere like such as, and I believe that they should, uhhh, our education over here in the U.S. should help the U.S., uh, should help South Africa, it should help the Iraq and the Asian countries so we will be able to build up our future, for us.”