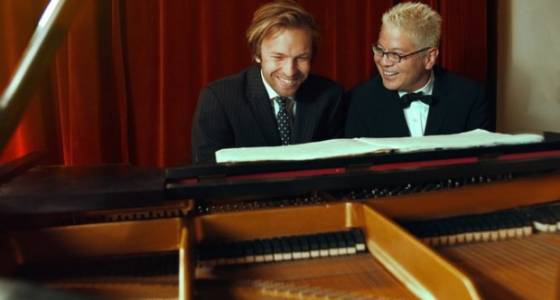 Oregon Ballet Theatre's 2017-18 season opener promises to be a crowd-pleaser.

Thomas Lauderdale, founder of the popular Portland band Pink Martini, and Hunter Noack, a classical pianist from Sunriver who's won the Los Angeles International Liszt Competition, will collaborate with the ballet on a new piece combining choreography with George Gershwin's classic "Rhapsody in Blue."

"It won't be the ballet with 'Rhapsody' and it won't be just them playing along - it will be a new creative experience," said the ballet's resident choreographer, Niccolo Fonte.

Lauderdale and Noack, who've each performed separately with the ballet before, will play a lesser-known, four-handed version of the piece while the dancers perform.

Lauderdale, who's played "Rhapsody" for 20 years, called it "really balletic."

"The way Hunter and I do it ... part of it's slower at different times, sections may be repeated in different ways," Lauderdale said, adding that he'll also do some improvisation.

"It's sort of a Thomas Lauderdale and Gershwin piece," Noack said.

Here are other highlights of the ballet's 28th performance season, as announced by the ballet's artistic director, Kevin Irving, on Thursday.

"Alice (in wonderland)": This show will be the West Coast premiere of what Irving called a "giddy and delightful" ballet by former Washington Ballet artistic director Septime Webre, with enough scenery, costumes and special effects to rival a Broadway production. The cast will include more than 50 children. The Oregon Ballet Theatre orchestra will play at all performances. Feb. 24-March 3, 2018, Keller Auditorium, 222 S.W. Clay St.