Our mid-winter travel goal was simple: a girlfriends' getaway to someplace warm and sunny that wouldn't require a passport and which offered an on-site spa for easily-accessible pampering treatments. We didn't even want to the hassle of having to rent... 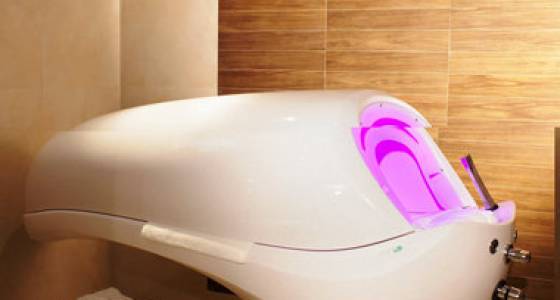 Our mid-winter travel goal was simple: a girlfriends' getaway to someplace warm and sunny that wouldn't require a passport and which offered an on-site spa for easily-accessible pampering treatments. We didn't even want to the hassle of having to rent a car to sightsee.

We quickly set our sights on Florida, homing in on the southern part of the Sunshine State in the hopes the ocean there might be warm enough for a dip in late January/early February.

Options were plentiful, but we decided on a Miami Beach resort with a reputation for elegance without stuffiness: The Palms Hotel & Spa. Located in what was originally a late 1930s art deco hotel, The Palms billed itself as the place for "laid-back sophistication." It certainly seemed to have everything we were looking for: an on-site Aveda spa, a beachfront location, a heated pool (open round-the-clock!), and a farm-to-table restaurant. There was even an indoor-outdoor bar & lounge, which proved perfect for late-night snacking/relaxing.

The Palms, which recently underwent a multi-million dollar renovation, is privately owned -something that sets it apart in terms of its style. From its elegant, retro-hip "Old Florida" lobby to the incredibly lush grounds, we felt as if we strolling through a tropical garden, complete with a pair of colorful parrots. The place was enchanting.

The focus of our four-night, three-day stay was clearly on rest and relaxation. We didn't expect to do much exploring off-site, in fact, preferring the idea of sunbathing, spa treatments and naps. But wouldn't you know it? We had one day of non-stop rain, which motivated us to hail an Uber to visit nearby South Beach, where we strolled along the Lincoln Road retail area and wandered over to Casa Casuarina, commonly known as the "Versace Mansion." This 1930 Italian-style villa had been owned for five years by famed fashion designer Gianni Versace, who was murdered on its front steps 20 years ago this summer. Today, Casa Casuarina is an ultra-exclusive hotel, as well as a tourist spot for curious vacationers. We also enjoyed dinner in South Beach at a very casual eatery, Bella Cuba, which featured yummy Cuban fare at incredibly low prices. (Not to mention the best mojitos of our visit).

But, beyond that, The Palms was our vacation "home away from home," and we took full advantage of its many amenities. I signed up for its "Signature Massage," an 80-minute mega pampering package that features a 30-minute treatment in what is called a "HydroCapsule." This unique piece of equipment, which reminded me a bit of an oversized clamshell, has the client lie inside it wearing a disposable bikini provided by the spa. From there, you're treated to a salt scrub that's rinsed and steamed off in the HydroCapsule, which also releases light therapy. It was a unique experience, to be sure, and one that left me totally relaxed for my even more relaxing massage. Another of my friends splurged on a facial, which she raved about afterward.

One of the most unique aspects of The Palms is that non-hotel guests using the spa are offered free, all-day access to the resort's pool, beach area and fitness room - a major perk.

Aside from its popular spa, we were very taken with the resort's Essensia Restaurant, which focuses on farm-to-table and locally sourced cuisine. There's even an organic onsite garden, which guests are welcome to stroll through. With its intimate indoor dining room, a large Caribbean-style covered terrace and a poolside terrace, a visit to Essensia was our favorite way to begin each morning, savoring the expansive breakfast buffet. We also enjoyed one very elegant and delicious dinner there our last night.

The Palms' focus on health and wellness extends to its activities, too. In addition to onsite yoga classes, there are free monthly NatuRuns - running workshops open to resort guests and Miami locals, that include mindfulness exercises, along with a run by the ocean, and all-natural refreshments.

Speaking of the ocean, we especially loved the hotel's location, right on the beachfront, with a private entrance to the charming Miami Beach wooden boardwalk that goes on for miles. Palms' guests are provided with free beach chairs and umbrellas, and yes, we even did manage a dip in the crystal-clear and (warm enough) ocean.

It was the perfect, stress-free winter reprieve, and one we hope to repeat again one day.

Here's a rundown of a few other popular South Florida spa hotels:

And for Florida fans looking a little further north: on the East Coast, the 168-room Jupiter Beach Resort & Spa offers island-inspired accommodations and oceanfront dining, along with a full-service spa that uses only all-natural, paraben-free products. 5 North A1A, Jupiter. Call: 877-389-0571. Even further north on Florida's west coast, is Clearwater Beach's popular Sandpearl Resort. This AAA Four Diamond Award winner is an eco-friendly resort with plenty of luxury. It's been named  "One of the Top Spas in North America" by readers of Conde Nast Traveler.  500 Mandalay Avenue, Clearwater Beach. Phone:  866-384-2995.

For more information about the Palms Hotel & Spa visit www.thepalmshotel.com

Nicole Pensiero is a South Jersey-based freelance travel writer and a member of the North American Travel Journalists Association.