In the 2 1/2 months between his three-game suspension and his termination from his Rutgers football coaching duties in the fall of 2015, Kyle Flood didn't pay his $50,000 disciplinary fine. But Rutgers received the money more than a year later as part... 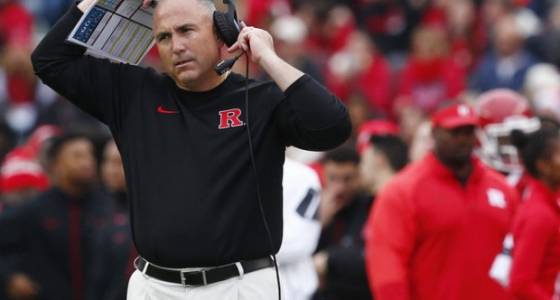 In the 2 1/2 months between his three-game suspension and his termination from his Rutgers football coaching duties in the fall of 2015, Kyle Flood didn't pay his $50,000 disciplinary fine.

But Rutgers received the money more than a year later as part of the separation agreement following Flood's termination for cause after the 2015 season, university records show.

Flood's separation agreement with the state university was obtained by NJ Advance Media on Tuesday -- 11 days after Flood was hired by the Atlanta Falcons as an assistant offensive line coach. NJ Advance Media submitted the request through the university's Office of Custodian of Records immediately after the Falcons' Feb. 17 announcement.

Even though he was fired on Nov. 29, 2015, after the Scarlet Knights capped a 4-8 campaign, Flood didn't sign his separation agreement until Aug. 9, 2016. Janine Purcaro, who served as Rutgers athletics' chief financial officer at the time, signed the 11-page contract one week later.

That amounts to a bi-weekly payment of $16,470. However, the contract states that Rutgers is entitled to offset on a dollar-by-dollar basis whatever it owes if Flood accepts "a position as a head coach or assistant coach in the NFL ... or any other employment.''

Flood worked as a guest host on SiriusXM's "College Sports Today'' from May 2016 until his hiring by the Atlanta Falcons. It's not known how much the Atlanta Falcons will pay Flood to serve as an assistant offensive line coach, but the ex-Scarlet Knights head coach was obligated to notify school officials within 10 days of any changes in his employment status.

Flood's bi-weekly payments were further offset by the $50,000 fine he received for violating a university compliance policy that prohibited him from having contact with professors in regards to their academic affairs.

The fine was scheduled to be paid through a $10,000 reduction to each of his bi-weekly paychecks over the final five months of 2016.

Under a standard confidentiality clause, Flood agreed not to sue Rutgers and to not divulge information or publicly disparage the athletics and/or football program.

Flood also agreed to cooperate with the university in connection with any administrative, legal, internal, NCAA, or other proceedings in the university requires his assistance.

NCAA investigating RU: What we know

In December, the NCAA issued a Notice of Allegations report accusing the Flood-led Rutgers football program of a string of violations. The allegations enveloping the Rutgers football program involve drug use by players, improper oversight of a "recruiting ambassador" program, and Flood's aforementioned violation for meddling with a player's grade.

Flood, who was tagged with a possible show-cause order for the alleged infractions, said on his SiriusXM Radio spot that he had interviews with NCAA investigators "multiple times'' following his ouster from Rutgers, adding that he had been "respectful to the process'' to that point and would "continue to do it until it's resolved.''