CaptionCloseOMAHA, Neb. (AP) — Investors who wanted billionaire Warren Buffett to address the current state of the world in his annual letter to Berkshire Hathaway shareholders will likely be disappointed, but they can still take some comfort in his... 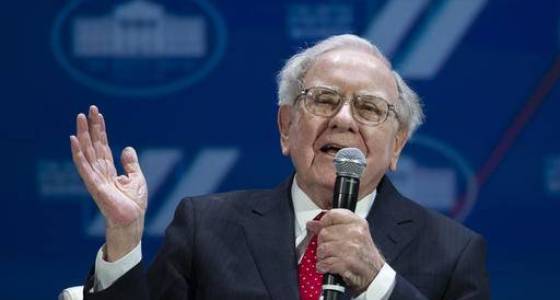 OMAHA, Neb. (AP) — Investors who wanted billionaire Warren Buffett to address the current state of the world in his annual letter to Berkshire Hathaway shareholders will likely be disappointed, but they can still take some comfort in his consistently rosy long-term outlook for the U.S. economy.

Buffett re-emphasized points he's made in the past, such as his advice to avoid high Wall Street fees by investing in low-cost index funds. And he again praised the country's market system for its ability to allow Americans to continue building "mind-boggling amounts" of wealth over time.

Unlike last year's letter, when the longtime Democrat and Hillary Clinton supporter took the opportunity to say he thought the country was in much better shape than some presidential candidates made it sound, Buffett mostly steered clear of politics this year.

"I'll repeat what I've both said in the past and expect to say in future years: Babies born in America today are the luckiest crop in history," wrote Buffett, who has said he thinks the economy will be OK under President Donald Trump.

Buffett will likely address other topics during a three-hour-long television appearance Monday on CNBC, but he still may leave some people wanting more.

Investment manager Cole Smead said he felt that Buffett spent too much of the letter extolling Berkshire's virtues instead of talking about how he'll approach investing the company's $86 billion cash or what went wrong with the failed $143 billion bid for Unilever that Berkshire took part in with 3G Capital. Smead said the 86-year-old Buffett and his investing partner, 93-year-old Charlie Munger, seem concerned about their legacies and how Berkshire is perceived.

Buffett used the letter to again explain the advantages of low-cost index funds. He said he estimates that wealthy investors who use high-priced advisers have wasted over $100 billion over the past decade.

To prove his point, Buffett recounted the first nine years of a 10-year bet he made in 2008 that an S&P 500 index fund would outperform a collection of hedge funds that the money managers who own Protege Partners LLC picked. Both sides picked a charity that would get at least $1 million.

Buffett's chosen index fund has recorded an 85.4 percent gain over than time while the hedge funds delivered an average of 22 percent.

Buffett devoted most of his letter to describing the evolution of Berkshire and the performance of the Omaha, Nebraska-based company last year. His annual letters are always well read because of his successful track record and his knack for explaining complicated subjects in simple terms.

Investor Andy Kilpatrick, who wrote "Of Permanent Value: The Story of Warren Buffett," said he wishes Buffett had gone into more detail about how individual Berkshire businesses performed, but overall he thought it was a good letter.

Berkshire has come to rely increasingly on acquiring entire operating businesses instead of the firm's stock portfolio, which includes major stakes in Coca-Cola, Wells Fargo, and Apple, among other companies.

Buffett said he will continue looking for more acquisitions with Berkshire's roughly $86 billion in cash, but the company's size means it will be hard to match its previous results.

Buffett said Saturday that Berkshire recorded a 10.7 percent increase in book value and a 23.4 percent gain in stock price in 2016. Over the past 52 years, Berkshire's book value — which is an estimate of its assets minus liabilities — improved 19 percent and its stock price grew 20.8 percent in compounded annual gains.