Kim killing airport ‘safe’ as suspects say they were tricked

Kuala Lumpur: The Kuala Lumpur airport terminal where Kim Jong-nam was assassinated with a lethal nerve agent was given the all clear Sunday, as two women suspected of carrying out the attack insisted they thought they were taking part in a prank video.The... 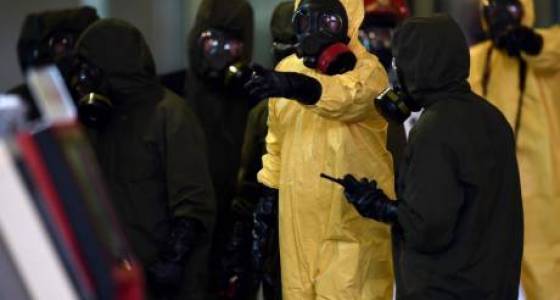 Kuala Lumpur: The Kuala Lumpur airport terminal where Kim Jong-nam was assassinated with a lethal nerve agent was given the all clear Sunday, as two women suspected of carrying out the attack insisted they thought they were taking part in a prank video.

The scene of the brazen February 13 killing of the North Korean leader’s half brother was swept by civil defence personnel in hazmat suits overnight, after Malaysia revealed Friday the victim died from VX nerve agent which is so deadly it is classified as a weapon of mass destruction.

Two women can be seen shoving something into Kim’s face in leaked CCTV airport footage of the ambush. He later suffered a seizure and was dead before he reached hospital.

One of the two female suspects now in custody, 25-year-old Indonesian Siti Aisyah, reportedly told a senior diplomat Saturday she had been paid just RM400 ($90) for her role, adding she believed she was handling a liquid like “baby oil”.

The other woman in custody, Vietnamese Doan Thi Huong, 28, told Hanoi officials she had been tricked into killing Kim and thought she was taking part in a prank for a comedy video.

Police sealed off large areas of the terminal’s two departures hall where the attack was carried out ahead of the sweep for traces of the highly potent toxin as a few curious onlookers watched.

Authorities later declared the area safe after nothing harmful was found.

“The police cordon was at three areas — the scene of the attack, the bathroom where the two female suspects washed their hands and pathway leading to the airport clinic — (and) has been taken down,” a police spokesman said.

The operation came almost two weeks after Kim’s death and puzzled some travellers.

Student Hariz Syafiq, 21, who was due to take a domestic flight later, told AFP: “Yes, I’m worried a bit. Why didn’t they quarantine the airport?

Indonesia’s deputy ambassador to Malaysia Andreano Erwin, who was granted consular access to Siti Saturday, said she did not know Huong according to reports.

Erwin added Siti did not want her family to “see her in this condition”.

Malaysian police have said one of the women arrested after the attack fell ill in custody, adding she had been vomiting.

However, Erwin said Siti was physically healthy while Vietnamese officials said Huong was “in stable health”.

Detectives are also holding a North Korean man but want to speak to seven other North Koreans, four of whom are thought to have fled to Pyongyang.

Selangor state police chief Abdul Samah Mat told reporters Sunday an investigation was ongoing at an apartment complex in Kuala Lumpur in connection with the four North Koreans believed to have left Malaysia on the same day as the killing.

He added that samples from the address had been sent for chemical analysis.

The news Friday that lethal VX nerve agent was used in the attack sparked anger in Malaysia and brought condemnation from South Korea, which has pointed the finger at the North over Kim’s death.

Seoul slammed the use of the toxin as a “blatant violation of the Chemical Weapons Convention and other international norms”.