Drivers look at their phones on 88 percent of trips

Zendrive makes technology that monitors how people are driving, so they took the data from 3 million drivers taking 570 million trips over 5.6 billion miles. They found that drivers used their phones for an average of three and a half minutes in 88 out of... 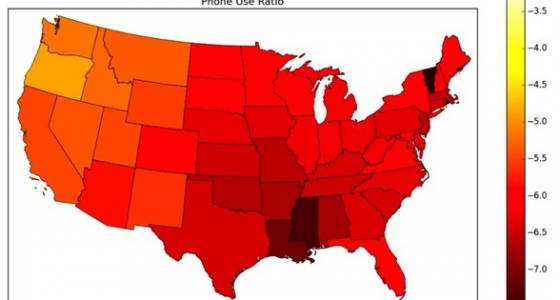 Zendrive makes technology that monitors how people are driving, so they took the data from 3 million drivers taking 570 million trips over 5.6 billion miles. They found that drivers used their phones for an average of three and a half minutes in 88 out of a hundred trips. From their study:

Everyday, that’s the equivalent of people behind the wheel talking or texting on 5.6-million car rides from our sample alone. When extrapolated for the entire U.S. driving population, the number goes up to roughly 600-million distracted trips a day….This finding is frightening, especially when you consider that a 2-second distraction is long enough to increase your likelihood of crashing by over 20-times. In other words, that’s equivalent to 105 opportunities an hour that you could nearly kill yourself and/or others.

Given that “Zendrive technology detects vehicle trips and safety related driving events using smartphone sensors”, one might think that they are actually underestimating the problem, given that people in cars with their technology know that they are being monitored.

Other companies like CellControl, actively monitor the use of cellphones for companies and families: it “can disable the ability to text, email, surf the web, play games, Tweet, post to Snapchat and Facebook, take selfies and much more while driving a vehicle.” The tech exists to solve this problem.

So why isn’t this the law? Why isn’t this technology built into every phone and car? According to Angie Schmitt at Streetsblog, because the smartphone industry doesn’t want to do it. She notes that Apple has even patented a lock out mode, “But mobile device manufacturers, afraid of losing market share, have foregone these fixes — and federal safety regulators have let them.”

In 2013, the National Highway Traffic Safety Administration first proposed a series of “voluntary guidelines” to reduce the potential for driver distraction….But these rules are weak, and no company will be forced to comply with them. There is a legal question of whether NHTSA, which has regulated cars, has the authority to regulate cell phones.

And we can be sure that in the current political climate, nobody is going to regulate anything. Angie says “we might need a mass movement that delivers a shock to the political system, like the ones waged by Ralph Nader for seat belts, or by Mothers Against Drunk Driving to establish strict drunk driving laws.” But I suspect it would not get very far in America, everyone is too busy looking at their phones. © Zendrive