Some of the loudest opposition to a proposed tax on imports has come from the retail industry, which sent a handful of top CEOs to meet with President Donald Trump last week and has warned that bigger tax bills could mean price hikes for customers.But the... 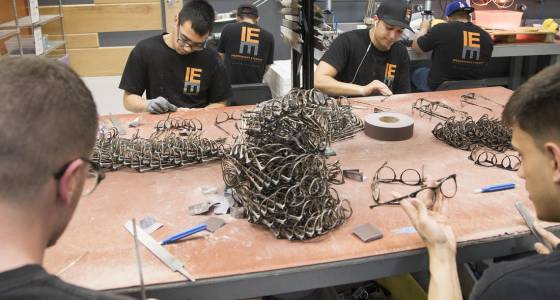 Some of the loudest opposition to a proposed tax on imports has come from the retail industry, which sent a handful of top CEOs to meet with President Donald Trump last week and has warned that bigger tax bills could mean price hikes for customers.

But the proposed border adjustment tax, part of the House Republicans' tax reform plan that would also lower the corporate tax rate, is making some smaller businesses that proudly tout their American-made status nervous too.

Although the 225,000 suits and sport coats Hart Schaffner Marx stitches each year are made at factories in Des Plaines and Cleveland, the wool fabric they're made from isn't.

If Hart Schaffner Marx had to pay a 20 percent duty on the fabric it imports, "my taxes would be through the roof," and at least some of it would be passed on to customers, said Doug Williams, CEO of the W Diamond Group, which holds the manufacturing, sales and marketing license for the brand.

Some of the loudest opposition to a proposed tax on imports has come from the retail industry, but the idea of a border adjustment tax is making some smaller businesses that proudly tout their American-made status nervous too.

But in the U.S., more than 90 percent of top exporters are also importers, and vice versa, Jensen said. And it's not just big corporations — even smaller local manufacturers buy some raw materials overseas, either because it's cheaper or because certain key components simply aren't made at home.

That reality complicates one goal of tax reform — to boost U.S. manufacturing.

Some of the manufacturing executives who met with Trump on Thursday backed the tax plan in a letter to congressional leaders earlier this week, saying it would "effectively end the 'Made in America' tax" that gives foreign competitors an advantage. But opponents warn taxing imports could raise prices for U.S. consumers.

Supporters of the proposed tax plan say companies shouldn't fear the border adjustment tax because the value of the dollar would rise, reducing the cost of imported goods and mitigating the effect on importers' tax bills. But it's unclear how quickly that adjustment would happen or whether it would fully offset the tax, forcing companies to absorb the extra costs or convince customers to pay more, at least in the short term.

Jason Stanley, vice president of the manufacturing division at the State Optical Co., talks about the decisions he and his business partner Marc Franchi had to make in order to manufacture their glasses in the United States. (Alyssa Pointer / Chicago Tribune)

Jason Stanley, vice president of the manufacturing division at the State Optical Co., talks about the decisions he and his business partner Marc Franchi had to make in order to manufacture their glasses in the United States. (Alyssa Pointer / Chicago Tribune)

"It could put us out of business," said Brandi Archer, who launched Chicago-based women's apparel brand Suki + Solaine in 2014.

Most garments are made by the company's six employees, with some sewn at outside factories in Chicago and New York when demand is especially high. Being U.S.-made is important to Archer, even though it's more expensive and experienced employees are tough to find. She wanted to use strictly U.S.-made fabrics too, but couldn't find the high-quality printed woven and knit materials her designs required.

"I would love it if there were more options for American-made textiles to choose from. But from a business standpoint, with what's available right now, it wouldn't work," she said.

State Optical Co. has about 50 employees making eyewear at a factory in north suburban Vernon Hills. But two key components — hinges and acetate for the frames — must be imported from companies in Italy and Germany, said Scott Shapiro, CEO of State Optical.

The imports make up a small slice of the value of each pair of luxury frames, so Shapiro isn't too concerned about a tax's impact on his margins. But he feels like it's a penalty on top of the hurdles he's already jumped to manufacture State Optical's frames locally when most eyewear is made overseas — including frames sold by his family's eyewear company, Europa International. The companies share offices in Vernon Hills.

There's a lot of talk right now, but we have to get beyond talk. — Scott Shapiro, CEO of State Optical

The team behind State Optical was convinced there was a market for luxury, American-made glasses, and that they could find a way to make it work, Shapiro said. But even with his experience in the industry, it was much harder than expected. Even buying machinery was a challenge — equipment didn't come with English instruction manuals, wasn't compatible with the U.S. electric grid and there was no local repair service.

"It just seems unfair that we're doing exactly what the government wants us to do, which is bring manufacturing back to the U.S., and we would pay the same penalty as companies importing everything," he said.

He'd like to see the imported components made in the U.S. too. But it likely wouldn't be cost-effective unless there were more companies like State Optical making glasses nearby, he said.

Jim Snedicker, co-founder of Chicago apparel-maker Stock Manufacturing Co., is already thinking of how he would compensate for any tax that increases the cost of the fabric he imports from Japan. Snedicker thinks the company can become more efficient with labor costs, which make up a larger chunk of overall costs than materials.

The 4-year-old company, which seeks to do about $1.2 million in sales this year, had been making Stock Manufacturing-branded menswear at other Chicago factories but opened its own facility in a small business incubator in the West Town neighborhood about three weeks ago, hiring three "makers" to sew its products.

Even if a tax did make fabric more expensive, that would hit competitors as well, he said.

"Ultimately it's going to get passed along to the customer, but everyone else would do it too," he said.

Local manufacturers said they justify the premium price for American-made goods with higher quality and a story customers like. But they also think there's a limit to how much extra people are willing to pay for the made-in-the-USA label.

Shapiro was hopeful politicians' talk of tariffs and taxes would encourage consumers to pay more attention to where the products they buy are made, but Williams was skeptical. Too often, waves of enthusiasm for made-in-the-USA fizzle when consumers stick to their shopping habits, he said.

"There's a lot of talk right now, but we have to get beyond talk," he said.