The new trainer man shall cast away captain: She takes up too much

the Captain is thrown overboard. Jesper Jensen has not found space for Stine Jørgensen in his first landsholdstrup, and there are many good explanations on. - 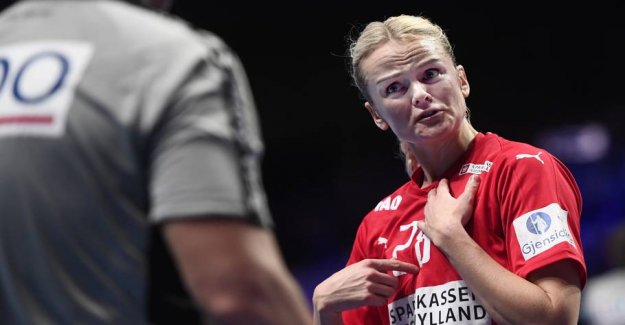 the Captain is thrown overboard. Jesper Jensen has not found space for Stine Jørgensen in his first landsholdstrup, and there are many good explanations on.

- At first, it is an opt-out of the Stine for this collection, and it is also not safe, she must with to the next. But it is in the long term, not a write-off of Stine Jørgensen. Lars Jørgensen and I just want to see how other players take the responsibility without her, " said Jesper Jensen.

the national Team will gather on Wednesday, 18. march and play according to plan, the two test matches against Brazil 28. and 29. march, with less coronapandemien puts an end to opgørene.

- I can use a picture: the larger The tree, the more shadows it. It is no criticism of Stine Jørgensen, but we want to see how the rest of the squad react when the others come out into the light and not just focusing on Stine to see what she does or what she wants, explains Jesper Jensen.

Stine Jørgensen has played 148 matches, scored 487 goals and was by Klavs Bruun Jørgensen was appointed captain after the missed OLYMPIC qualification in 2016, which prompted a fierce criticism of the national coach.

it Was so it? She is finished on the national team?

- As a starting point I don't think that that was it. Now get the other players only the chance to take responsibility. Five years ago was Stine Jørgensen undisputed Denmark's best handball player - right now, she is not a self-written play on the team, but she is also not written off, says Jesper Jensen.

Who do you expect in the first place takes responsibility?

- Anne Mette Hansen to a greater extent than she already has done. I also expect that players such as Mie Højlund and Kristina Jørgensen strikes and takes responsibility.

And Stine Jørgensen filled too much, both in and outside of the track?

- This is what Lars and I have assessed. There has been a gigantic pressure on her, and she has even contributed to it. We would like to release her from. She has taken a position on anything, and it has been both a strength and a limitation of her own game.

- Well everything from the game, when the players gather for food and been the one who felt obliged to say something to the meetings. For many years there have been many arrows directed at her – on good and evil. It has gone out of her own game, because a few others have taken responsibility, says the national coach.

How she took the message?

Super cool! It was not fun for me having to give her the message, and I respect that of course she was disappointed. She would be. But she was also very understanding, says Jesper Jensen.

Stine Jørgensen played a bad WORLD cup finals, in december, started often on the bench, and burned a sea of shots. Jesper Jensen has instead taken two stortalenter in the figures of the 18-year-old venstreback Emilie Steffensen, Herning Ikast Handball, and the 22-year-old left-handed højreback Helene Kindberg, Silkeborg Voel.