the Defense has decided that all employees who are not absolutely necessary to solve critical tasks, are now being sent home until 1. april. This means, among 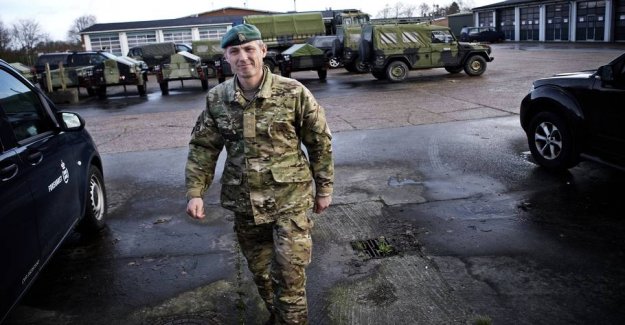 the Defense has decided that all employees who are not absolutely necessary to solve critical tasks, are now being sent home until 1. april.

This means, among other things, that about 400 soldiers on Varde Barracks in western Jutland just now about to be sent home. Usually there are 600-800 employees in the barracks.

- We have full time in sending in the day. It happens to exercise due care and to avoid contamination of the corona, says press officer Martin Hillmann from Varde Kaserne.

Presseofficeren provide Extra Leaf, to all the staff who are not directly related to the solution of international military tasks and some specific training, will be repatriated.

- The general education and training is suspended. We are both a efterretningsregiment and sergentskole. About one hundred conscripts, and a similar number of sergeant-students to be returned.

another two hundred men from the depots, garages and repairers to be returned also. We organise at the same time sending so that we can cover each other in case of illness. A chief and a deputy is working not both at the barracks. The one working from home for a period of time. We do everything we can to limit the smittefaren and maintain our ability to operate, says Martin Hillmann opposite Ekstra Bladet.

According to Hillmann is the coming weeks the trust.

- It is supposed, that those who can work via computer from home, doing it. Of course, we have invited the demobilized soldiers to think about and try to avoid being infected to the extent that it is now possible, says presseofficeren.

While most of the soldiers on Varde Barracks so as to be returned, so do about 400 other soldiers on the alert centres in Thisted, Herning, Haderslev, Næstved and Allinge to rely on, they are not allowed to leave the beredskabscentrene before the earliest on Monday.

- as we have done, because we have a fear that we cannot maintain our readiness, if there are just one or two people, that become infected and then comes back and infects the other, says the brigade commander, Stig Hammerhøj.