Winter settles in the crypto sector

The crypto sector says goodbye to 2022 sunk in the worst crisis in its history. 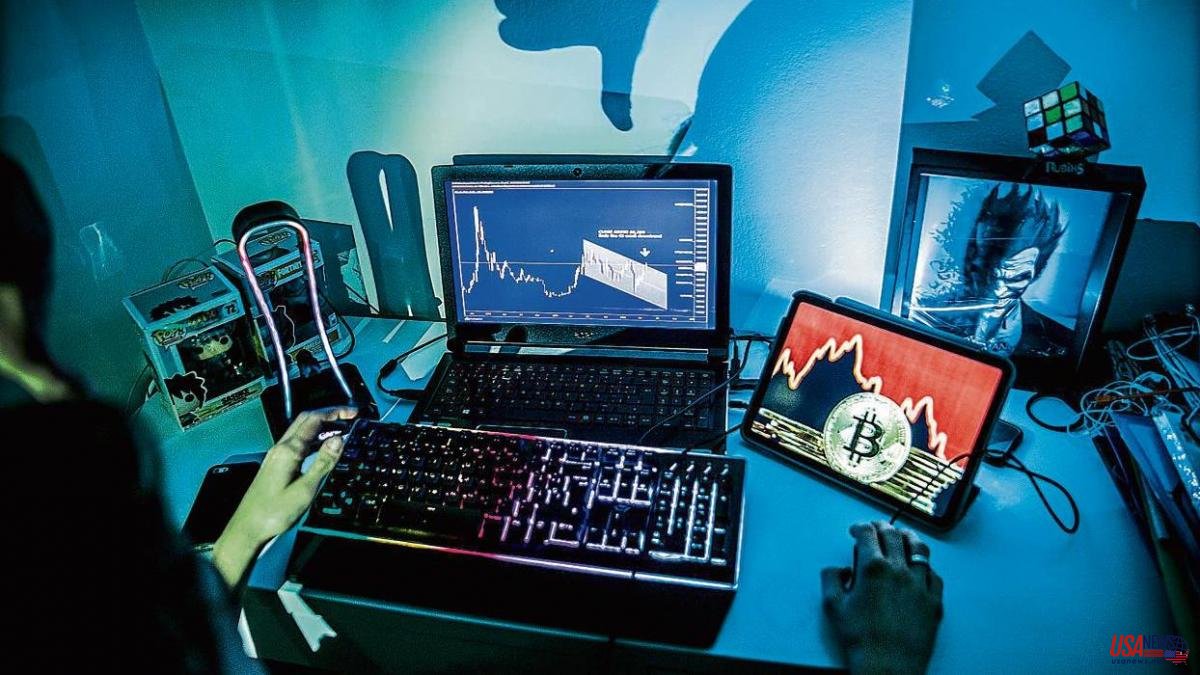 The crypto sector says goodbye to 2022 sunk in the worst crisis in its history. After two years of overwhelming euphoria, it has suffered capital flight like never before and has lost the trust that the mass public had begun to place in it. Nothing more symptomatic than the evolution of bitcoin, the reference currency, which closed the year with a 60% drop, going from 42 to 15 euros in value. Thousands of users – who began to invest through mobile applications during the pandemic – have lost everything. The Bank of Spain and the CNMV repeatedly warned of the high risks of investment due to the lack of transparency of the companies, the extreme volatility, complexity and lack of regulation. And 2022 has proved them right.

The magnitude of the tragedy was recently summed up in a tweet by Nouriel Roubini, a prominent economist who once predicted the subprime mortgage crisis. "We are facing the largest transfer of wealth to a group of stupid criminals, con artists, charlatans, con men, depraved, fanatics and lunatics that we will never see again in human history," he said.

As in the Great Recession of 2008, a cascade of events has triggered the crisis. In February, several platforms in the United States began to be investigated for alleged irregularities, including BlockFi, which ended up acknowledging its illegalities and assuming a million-dollar fine. In May, Terra and Luna collapsed; in June, the Three Arrows Capital fund went bankrupt; in July, the Celsius and Voyager Digital platforms fell and in November the worst happened: FTX, one of the largest cryptocurrency exchange platforms, filed a contest with a hole of 3,000 million dollars due to an alleged fraudulent management of its founder, Sam Bankman-Fried. A businessman who has already become a public figure. While under house arrest pending trial, he has announced that he wants to star in a film inspired by The Big Short to tell the rise and fall of FTX.

In addition, the crisis has fully affected the world of NFTs, non-fungible tokens that allow the creation and sale of digital works of art. According to data from the Chainalysis consultancy, if at the beginning of 2021 these assets generated around a million operations, by the end of this year the figure has fallen to more than half (491,000).

This concatenation of misfortunes has been baptized with the name of crypto winter and it is not clear how long the phenomenon will continue. “With the bankruptcy of FTX we have hit rock bottom. At the moment, Binance, the largest exchange platform, is resisting the challenge and so is Crypto.com. It is clear that bitcoin will take years to reach the values ​​of 2021 but the sector will overcome the negativity of 2022 in the next year, ”says Eneko Knörr, founder of Onyze, a digital asset custody service. However, there are more pessimistic views, such as that of Jared Gross, director of asset management at JP Morgan. “As an investment asset, cryptocurrencies do not exist for most large institutional funds. The volatility is too high. In the past, bitcoin could be considered a kind of digital gold, a safe haven asset that allowed investors to protect themselves from inflation and economic conditions. But now it is clear that these hopes have been dashed”, pointed out in the Bloomberg agency.

The sector, which had always taken pride in evolving outside of macroeconomics, is now following suit. “Investors are increasingly conventional companies that are dependent on the monetary policy of regulators. Therefore, if liquidity decreases or stock markets go down, the crypto sector will suffer accordingly,” says Knörr.

Despite the pessimism of the market and the fraud in the sector, "technology has continued to advance and that is a fact to be valued positively," according to Victoria Gago, director of the European Blockchain Convention. In September, she recalls, a historic milestone took place with one of the largest applications in the industry, Ethereum, migrating to a system that significantly reduces the carbon footprint of transactions.

In addition, the adoption of technology has continued to advance with companies such as Visa or Mastercard multiplying initiatives in the sector. In the first case, with a card for payments with crypto assets and in the second, with an application to help banks to manage operations. In Spain, a total of 60,000 million euros were transacted through cryptocurrencies, an average of around 1,300 euros per inhabitant, according to calculations by the Bank of Spain for 2021 (the figure for 2022 is not yet updated). Most movements are made through large applications, such as Binance, Coinbase, FTX... The large banks, such as Santander, BBVA or Caixabank, do not allow operations to be carried out although they have projects underway valuing options.

Another way to measure the advances in technology is to observe the evolution of investment in startups in the sector. As the graph shows, financing has slowed down from the second quarter of 2022 but without sinking to zero. In fact, the data shows that the investment of venture capital funds is still above the levels of 2020, which demonstrates the interest of the market despite the crisis.

Another case that exemplifies that the industry is not dead is the initiative of Goldman Sachs to acquire new technologies. Days after the bankruptcy of FTX was announced, this large investment bank said that it was going to allocate “tens of millions” to buy crypto companies. “We see really interesting opportunities at sensible prices. The technology is meeting expectations,” said Mathew McDermott, head of digital assets at Goldman Sachs.

To overcome the confidence crisis of 2022, the sector is placing its hopes in the arrival of new regulations, despite the fact that it had always been suspicious of State intervention (by going against the nature of blockchain technology). Among the initiatives on the table, the proposal of the European Union stands out, which is preparing a regulation, called MiCa, whose entry into force has been delayed until 2024. The regulations will regulate transactions, data management, identities and key, and will oblige countries to have a supervisory body. Instead, the United States goes a step further back with regulation. President Joe Biden has shown his concern about fraud and for now the SEC (Securities and Exchange Commission) has set out to end the "wild west". For now, he is studying how to regulate loans, cryptocurrency exchanges and the figure of brokers.

As long as this regulation does not arrive, the sector will continue to operate under the same formula that this year has led it to drift.