The dramatic context in which the President of the European Commission, Ursula von der Leyen, delivered her annual State of the Union speech this morning in the European Parliament - an open war on European soil - has given epic overtones to her intervention, followed with an emotional face by the first lady of Ukraine, Olena Zelenska. 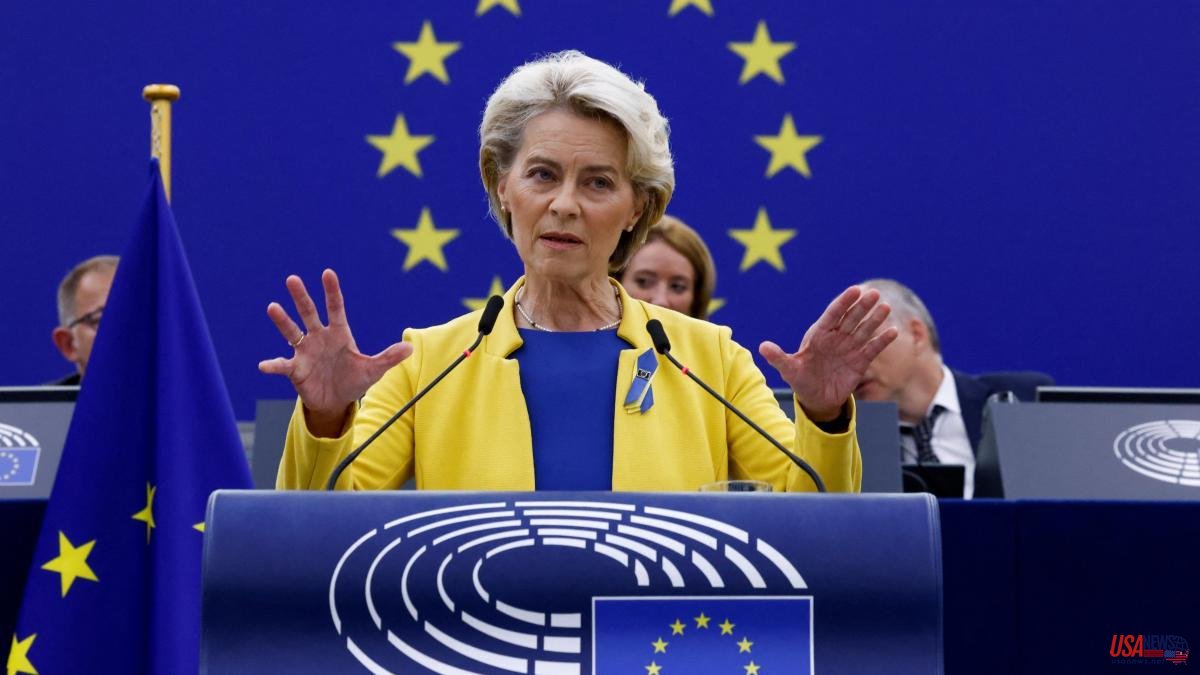 The dramatic context in which the President of the European Commission, Ursula von der Leyen, delivered her annual State of the Union speech this morning in the European Parliament - an open war on European soil - has given epic overtones to her intervention, followed with an emotional face by the first lady of Ukraine, Olena Zelenska. "Today courage has a name, and that name is Ukraine. Valor has a face, and it is that of the Ukrainian men and women who are resisting Russian aggression," said Von der Leyen, who has appealed to the European public opinion to withstand the test to which the energy crisis caused by Vladimir Putin is subjecting the Union. Her proposals to stop it, she has announced, will allow the countries of the European Union to raise up to 140,000 million uros to alleviate its social and economic consequences.

"Let's be clear: there is a lot at stake in this war. Not only for Ukraine, but for all of Europe and for the rest of the world. (...) This is not just a war from Russia to Ukraine, it is a war against our energy, against our economy, against our values ​​and against our future. It is the war of autocracy against democracy. With the necessary courage and solidarity, Putin will fail and Europe and Ukraine will win", emphasized Von der Leyen, dressed, as many of its commissioners, in blue and yellow, the colors of the Ukrainian national flag, in an atmosphere of emotion and cautious enthusiasm at the military advances made in recent days by the Ukrainian army.

Inevitably, his speech has lost intensity when entering the purely community level, when Von der Leyen has explained the main lines of his legislative proposals to respond to the serious energy crisis that Europe is suffering and that has caused levels of inflation never seen in the Euro zone. "Getting to the end of the month is becoming a source of anxiety for millions of businesses and households," he admitted. Among the most far-reaching measures proposed by Brussels, in addition to an electricity saving plan with binding targets, different measures to limit the benefits of energy companies, in the case of renewables and nuclear through a cap on the price of this electricity and, in the case of electricity produced from fossil fuels, through a "solidarity contribution".

"In these times it cannot be that some are making extraordinary and unprecedented profits from war and at the expense of consumers. Right now, profits must be shared and channeled to those who need them most. Our proposal will raise more than $140 billion euros that will allow the Member States to cushion the blow directly", announced Von der Leyen, who has asked for specific aid for certain industries, "such as glass factories that have had to turn off their furnaces or for single-parent families that are They are overwhelmed by the succession of bills they have to pay.

While he was delivering his speech, it became known that Germany was considering helping the energy company Uniper, suffocated by the rise in gas prices, by nationalizing it, news that gives way to the difficulties that the European industry is going through. Von der Leyen has announced a new relaxation of the rules on state aid to allow the rescue of companies in trouble, as well as a reform of the stability and growth pact that puts more emphasis on the second concept of the statement allowing the States to carry out the investments that the economy needs to overcome the current combination of crises.

If last year the president of the European Commission focused her speech on the achievements of community management of the coronavirus pandemic ("We did it well because we did it the European way, and it worked", she said in a speech that she wanted to be an injection citizens) on this occasion Von der Leyen wanted to highlight the speed and scope of the response that the Twenty-seven have given to the war in Ukraine. "Fifteen years ago, when the financial crisis hit, it took us years to find lasting solutions. A decade later, when a global pandemic hit, we reacted in just a few weeks. This year, as soon as the Russian army crossed the border into Ukraine, our response was unanimous, resolute and immediate".

The economic, financial and political sanctions adopted by the European Union in coordination with the United States, "the most severe in history", are here to stay and are working. "Car production is down by three-quarters compared to last year. The lack of spare parts is forcing Aeroflot to park its planes. Lacking semiconductors, the Russian military is extracting chips from dishwashers and refrigerators to repair military equipment. Russian industry is in ruins," Von der Leyen said. "I want to be clear: We are not going to lift the sanctions. This is the time to show determination, not appeasement policies" against Moscow.

The president of the European Commission has announced different initiatives to try to help the Ukrainian economy to recover, especially measures to facilitate its access to the single European market, the inclusion of the country in the area free of roaming charges and aid for schools . Von der Leyen will accompany First Lady Zelenska today on her return trip to Kiyv and will discuss these matters directly with the Ukrainian president.

Von der Leyen, as Finnish Prime Minister Sanna Marin did yesterday, has called on the European Union to be self-critical and draw lessons from the naivety with which it treated Vladimir Putin for years and addressed his dependence on fossil fuels. "One of the lessons of this war is that we should have listened to those who knew Putin," he said, quoting "Anna Politkovskaya and all the Russian journalists who exposed his crimes and paid the highest price for it," to the voices that from Ukraine, Moldova, Georgia, Belarus and from within our own Union, in Poland, in the Baltic countries "we were warned for years that Putin would not stop".

In the energy field, Von der Leyen proposes "taking a leap into the future" with "a paradigm shift" to speed up the transition. In this sense, he has announced the creation of a "European Hydrogen Bank" through which 3,000 million will be invested in the coming years to accelerate the development of this technology. This instrument, according to the president of the commission, "could be a turning point" for an energy EU that has promised to leave behind its dependence on fossil fuels imported from Russia. "This is how we promote the economy of the future, this is the European Green Deal", she stressed to MEPs.

The European Commission wants these same lessons to be applied to other areas where the Union is also dependent on supplies from foreign countries ruled by autocrats. "Lithium and rare earths will soon be more important than oil and gas," said Von der Leyen, recalling that China currently controls the world's downstream industry and almost 90% of rare earths and 60% of lithium are processed in China. The answer from Brussels is a European Law on Fundamental Raw Materials to promote strategic projects to cut that dependency and create reserves of certain materials in which the supply is in danger.

Von der Leyen finished off his hour-long speech with a mention of the solidarity work of thousands of Europeans with Ukrainian refugees, a treatment that he has claimed to extend to those who arrive from other parts of the world. "His is a story of heart, character and solidarity, a story that shows what we Europeans can achieve when we come together around a common mission. This is the spirit of Europe, a Union that stands strong and united."