Víctor Manuel: "Now I have a great life, until one day it hits"

Víctor Manuel does not stop at 75 years of age. 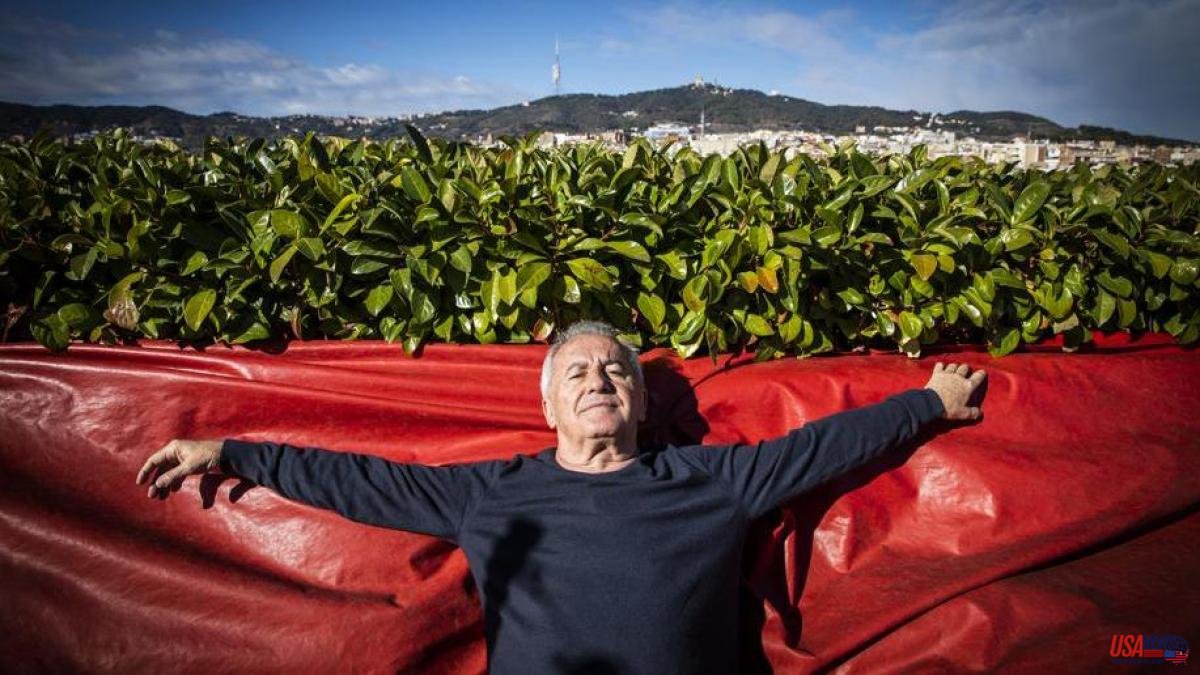 Víctor Manuel does not stop at 75 years of age. He is now involved in the project La vida en canciones (Sony), a large retrospective in book format, with sixty songs in the form of greatest hits, rarities or lost jewels.

And the corresponding tour, La vida en canciones (The stage heals everything) that will bring him closer to the Palau de la Música on February 9 with his band and within the celebration of its 75th anniversary.

A few weeks ago Pablo Milanés passed away. You collaborated a lot with him.

Man, I knew Pablito, I know him a lot. He produced his record Querido Pablo in 1985, where he sang with half the world, Chico Buarque, Serrat, Sabina, Aute, Mercedes Sosa, a very beautiful record and very different from all the ones he has made. And he singing as always, wonderfully, and then we always saw each other, like when we did a tour in 1995, En blanco y negro.

And what did you learn from him as an artist?

You can't learn anything from Pablo because you will never be able to reach his height in that sense, he is so extraordinary as a singer and composer that you can try but he plays in another division, that of the great American standards. It's just that it was very difficult to follow him because he had so much facility to sing… he was great, great.

Getting down to business: how did this project La vida en canciones come about?

Sony had a proposal, which was that since I was turning 75, do a special edition of an anthology that, on the other hand, I had never done. I said yes, but I wanted to intervene and put some songs that they would never have put in an anthology, like b-sides, strange songs... For me they explained the things I've done throughout my career better than a simple hit record.

It is a vast work but for someone who already knows you artistically, right?

Yes. The only wink there is for a new audience are three cuts in the form of collaborations with Dani Martín, Rozalén and a Solo pienso en ti where Drexler, Santi Balmes, Iván Ferreiro or Sidonie intervene.

Doesn't it bother you to make visible that you are already 75 years old?

Hahaha... people tell me that as old as I am, I'm very well. But, look, now I do things that I didn't do when I was young. Like singing three days in a row with a symphony last September conducted by Joan-Albert Amargòs; When I was young I couldn't do it right away because my voice broke before completing the three days. And now I have like a second life, great, and I don't care about those things, until there is a day when it hits and I can't do it anymore. At the moment I feel strong, and when people see you on stage they appreciate it a lot, because they see that you are going to sing and you are not going to hide. You are there planted for two and a quarter hours singing to the fullest. Honestly, I never dreamed that I could be singing at this age. At this age, and long before, my father and grandfather were already dead.

Not all of his songs hold up equally well over the years. Which are the worst enduring?

The ones that last the least are those in which you have tried, even if it was sideways, to become fashionable with something or look for a very plastic sound, which has suddenly gone out of fashion, or a rhythm that does not go with you or that distorts you... All that falls out of the repertoire immediately but not now but a few months after doing it. But when you do it you don't realize it, they tell you or you tell yourself that that synth would go well there, and then you spend your whole life hating that damn synth.

And why I only think of you is the one that holds up the best?

Because it's an extreme song, it was a song that didn't exist when it was released, and it also tells how it's played, delicately, suggesting things so that people finish the song. Now it's a classic song but when it came out it was a green dog, a strange thing, but at the same time it's the one that has given me the most satisfaction in my entire career.

What is the song that raised the most dust of all the ones you have written?

The one that gave me the most trouble when I made it is one that is included in the triple album, I don't want to be a military man, a very short song that unleashed a kind of perfect storm in me. And it was so serious for me that I spent almost five years sending songs to censorship and they simply didn't answer me, and that's why I couldn't record my songs for a long time, from 72 to 77.

Compared to the Franco years, wouldn't it be interesting if the new batch of singer-songwriters kept them in mind?

When I tell things about those years to young people, they look at me as a strange guy, and they don't believe it, for example, that you had to pass censorship to be able to sing in Barcelona, ​​and that the next day to sing in Badalona I had to return to pass it

Don't you think that there is more and more political correctness, and not only in music?

Yes, because the networks crush people a lot. Generally for the worse, and there are many people who can't escape that world, and they know that whatever they think, write, or any song that has an incorrectness is going to screw up their lives. And people cut a lot. I give you an example. Álex Ubago participated in the 2003 No to War campaign, and his life was literally fucked up, and that was something that 90 percent of the people in this country agreed on. They made his life impossible economically and artistically.

We live in moments of enormous tension, for any matter, don't you think?

It is a tension that is new, so brutal that it was not even seen in the times of the Transition. On the one hand, it is that they are copying models that have worked very well in other places, such as with Trump or Steve Banon. But I think we have to go back even further, with Bush Jr., and since then there has been a general drift in Europe where it seems that putting yourself at the extremes and saying things that even if they are not true are profitable. People don't want to know the truth, they want to know their truth. I would ask those who criticize if they really want the emigrants to be kicked out of Spain, if they are willing to stop working to walk their father down the street or wipe his ass. The problem with populism is that when people are given solutions, they are penny solutions to very complex things. At the moment people buy that merchandise and that's how we are where we are. And phenomena like that of Vox arise, which promises things that it cannot fulfill or does not know how to fulfill, but that people buy without thinking.