The Belgian champion Wout Van Aert (Jumbo Visma) continues with his particular recital in the Dauphiné and achieved the double in the sprint, in the fifth stage disputed between Thizy-les-Bourgs and Chaintré, of 162. 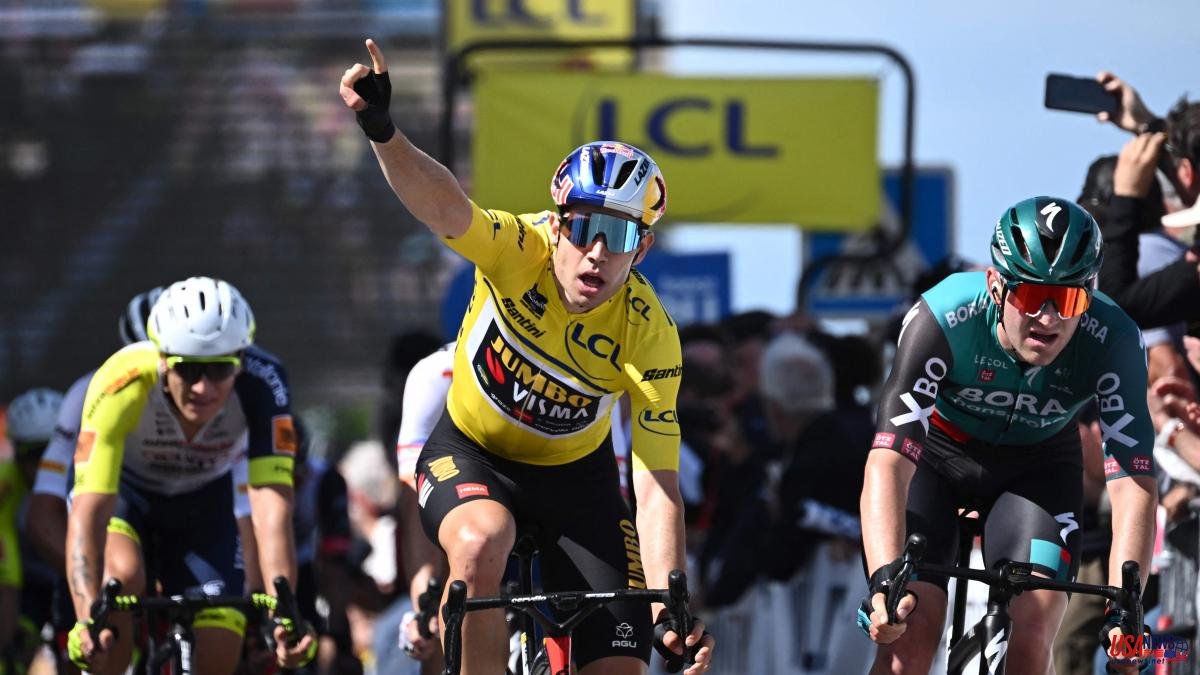 The Belgian champion Wout Van Aert (Jumbo Visma) continues with his particular recital in the Dauphiné and achieved the double in the sprint, in the fifth stage disputed between Thizy-les-Bourgs and Chaintré, of 162.3 km, in which he reinforced by 10 seconds his yellow jersey as a bonus.

Van Aert (Herentals, 27 years old) is unstoppable. While the mountain arrives, it is dominating in all areas. He won the first stage, lost another due to overconfidence, in the time trial he only gave in to the double World Champion Filippo Ganna and in the fifth he again exhibited his speed.

Fifth victory of the season for Van Aert after beating Belgian Jordi Meeus (Bora Hansgrohe) and Briton Ethan Hayter (Ineos) at the finish line in the town of Chaintré, perched on a hill that sounds like Burgundy wine, who gave time to the peloton in 3:38:35, at an average speed of 44.5 km/h.

Within the main group, Enric Mas (Movistar) crossed the finish line, who suffered a hard fall going down Cota de Dun in which he injured his right shoulder. The Balearic arrived injured, but whole, ready to continue if no complications arise.

A victory that establishes the superiority of Van Aert, holding on to the yellow jersey with such force that he does not rule out the final victory. At the moment he beats the Italian Mattia Cattaneo (Quick Step) by 1.03 minutes and his Jumbo teammate Primoz Roglic by 1.06. The first Spaniard follows is Juan Ayuso (UAE Emirates), eighth at 1.58.

A day of constant ups and downs, almost leg-breaking, although without great orographic difficulties that started from a small Rhône municipality of 6,000 inhabitants. The breakaway was formed at km 40 and lasted until well into the finish line. Benjamin Thomas (Cofidis), Doubey (TotalEnergies), Bakelants (Intermarché) and Schönberger (B

The quintet passed the Col des Ecorbans (3rd), where Rolland dropped after scoring points in the port, then the Cota de Dun (2nd), in whose descent Enric Mas landed, who was treated by the race doctors.

The Groenewegen BikeExchange and the Jumbo chased the block when there were still 44 km to go and the lead for the breakaways was 2 minutes. The differences dropped to 1 minute at the Col du Bois Clair (4th) and 30 seconds at the last obstacle, Cote de Vergisson (4th), with the summit 12 minutes from the finish.

On the way down, Ineos was launched and all the teams got involved to bring down the advanced team, which was close, but still with asphalt in between. The platoon lined up in single file, fired up, with everyone entering relays.

There was excitement, uncertainty. The brave ones who challenged the peloton sold defeat dearly, so much so that they endured their illusions intact until there were 300 meters left to the last line. A duel in which "Goliath" Van Aert, the strongest and most powerful, finally won. In unbeatable mode.

This Friday the sixth stage will be held between Rives and Gap, 196.4 km long, a mid-mountain day with 4 scoring steps, the most important being the Col de Rousset (2a,6.6 km at a 5.1 slope) before half of route, and the Col de Cabre (2a, 9.1 km to 4.7). With 5 km to go, the Romette slope can give game. Day not suitable for forgetfulness.