Turull, after the dismissal of Puigneró: "We feel quite expelled from the Government"

Visibly sad and emotional, Jordi Turull did not want to advance the decision that the Junts per Catalunya executive will take this morning to respond to the dismissal last night of the Vice President of the Generalitat Jordi Puigneró by Pere Aragonès, but he did give some clues. 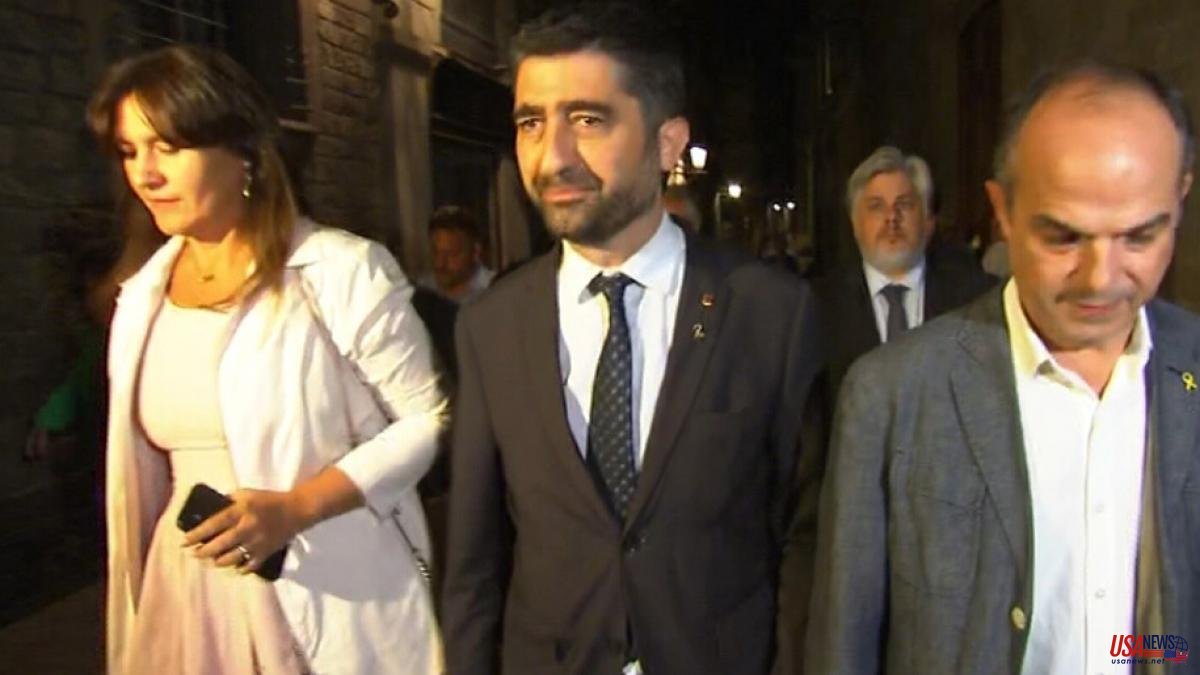 Visibly sad and emotional, Jordi Turull did not want to advance the decision that the Junts per Catalunya executive will take this morning to respond to the dismissal last night of the Vice President of the Generalitat Jordi Puigneró by Pere Aragonès, but he did give some clues. "We feel quite expelled from the Govern", warned the general secretary of JxCat in an interview on RAC1, in which he also revealed that all the ministers of his formation "close ranks" and have made their position available to the party.

JxCat meets its executive this morning to make the corresponding decisions after the dismissal of Puigneró when the president of the Generalitat considers that his former number two in the Government was disloyal to him by hiding from him that his parliamentary group would ask him in the general policy debate that it submit to a matter of confidence if it does not satisfy the three points of the Government agreement that Junts demands: strategic direction of independence, dialogue table to speak only of self-determination and amnesty, and parliamentary coordination in Madrid.

"When you meet to try to redirect the situation and the decision is to expel your vice president, the feeling is that there is no will to fix it", considered Turull who has branded, as his formation did yesterday, an "error" the dismissal of Puigneró, a decision that, as he has assured, left him "perplexed". "Where is it written that in a coalition government a councilor from one party must explain to the president of another party the debates on the internal strategy of his party?" asked the post-convergent leader.

For Turull, this decision to expel Puigneró "does not help to fix things" and he recalled that if in August he himself already warned that "we cannot continue like this" -regarding the relationship between the two partners of the Government-, "like this less". The general secretary of Junts, in addition, has explained that Puigneró only knew that there was a possibility that the parliamentary group would ask the president to submit to a matter of trust, but that the final decision was only known by him, the president of the party, Laura Borràs , and spokesman Albert Batet.

Turull did not want to anticipate "out of respect" for the decisions made this morning by the executive of his formation, but he has made it clear that the last word will be held by the militancy, which, as agreed at the July congress and ratified by the executive August, will be consulted on continuity in the Government. However, he has avoided responding to deadlines in relation to this query.

Regarding this morning's meeting, Turull stressed that the executive must assess whether the situation can be redirected, "it is becoming more and more difficult" -he has added-, he has indicated that he is clear about what he will say but he has also added that he likes it a lot to listen, so their position "will not be unmovable" and that they will make a decision "with their heads and hearts but not with their stomachs", without forgetting the goal they are working for, which is the independence of Catalonia. Regarding the consultation with the militancy, he has insisted that it is a commitment that binds them.

However, the general secretary of Junts wanted to make it clear that they were not directly asking Aragonès to submit to a matter of trust, but rather to do so if he was not willing to comply with the Govern agreement in the terms that were signed at the time with the three points that Junts claims, which he has described as "core" for the formation. "An agreement signed by 83% of the militancy has been altered," Turull lamented to highlight the seriousness of the moment.

In this sense, the nationalist leader has reproached Aragonès for responding to Batet in the general policy debate on the matter in a "generic" way of the "we'll talk later" type. "We wanted guarantees and deadlines," he insisted. "What cannot be is that a president who is based on some commitments that he has assumed does not respect them" and if he does not keep them, Turull has opined, he must once again request the support of the Chamber for "democratic radicalism", The independence leader has maintained, who has been very hurt and has even burst into tears at the end of the interview after assuring that he feels "absolute sadness" because there are "sacrifices of many people" here.

Turull has recounted the meetings he had yesterday with Aragonés and has revealed that in a first meeting the president did not inform him that he was going to dismiss Puigneró, for which he saw "margin to fix the situation", which he went out to transfer to his ministers . However, as he has added, Aragonès called him again to tell him that he would remove the vice president. Then the JxCat leader warned him that it was a "mistake" and that the vice president "had been loyal to him." Always according to his account, Aragonès told him that he would think about it but later he called him back to tell him that he had to do it (stop Puigneró).