This is how the Hernangómez are: some movie brothers

On February 16, 2015, at Madison Square Garden in New York, the Gasol brothers made the opening jump of the NBA All-Star game. 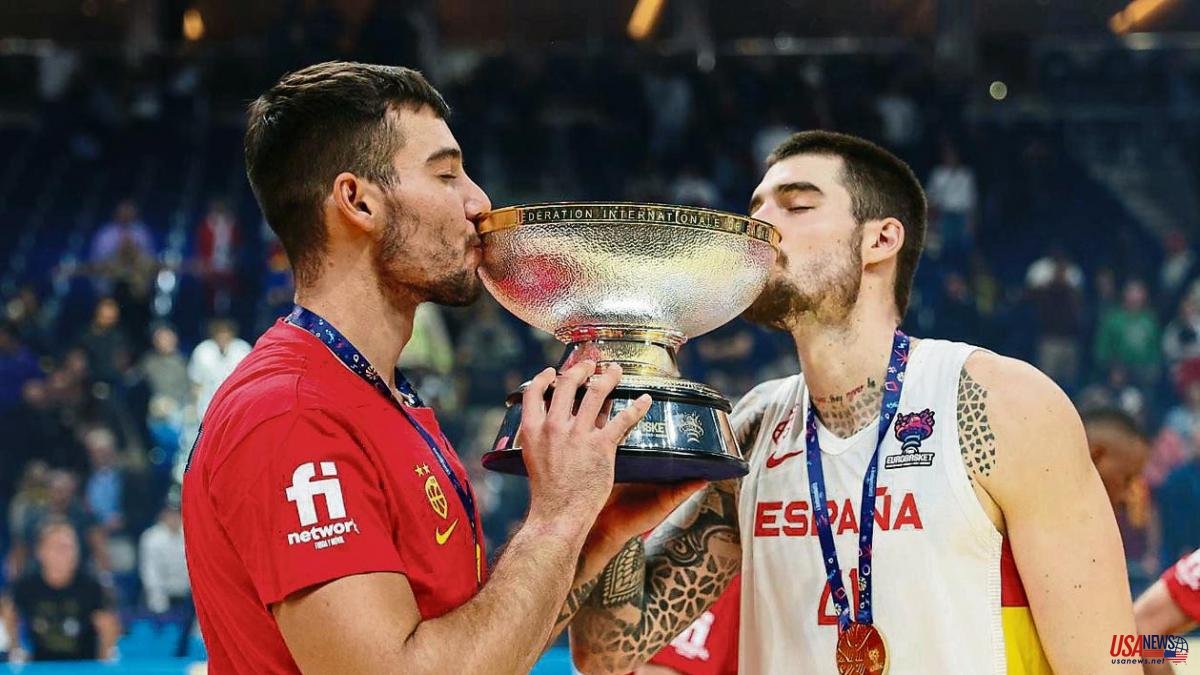 On February 16, 2015, at Madison Square Garden in New York, the Gasol brothers made the opening jump of the NBA All-Star game. Twenty months later two Madrid brothers from Las Rozas, the Hernangómez, landed and made their debut in the league.

So, Willy (pronounced Billy), the tallest (2.11), was 22 years old and Juancho, who is 2.06, one less. The first came from winning the Cup and the ACB with Madrid. The second had just been named best youngster with Estudiantes.

Genetics were on his side, as both his father and mother were basketball players. The parent, Ivonne Wonny Geuer, of German descent, played more than 150 games for Spain, was fifth in the Barcelona Games and won the 1993 European Championship. For his part, the parent, a Madrid youth squad, played for Estudiantes and later other Primera B teams. Andrea, the little sister (22) of the two champions, is part of the Fairfield University Stags, where she averaged 8.1 points last year.

However, that of the Americas was not to arrive and kiss the saint for the Hernangómez. They have barely enjoyed continuity and stability, victims of the US league's transfer system. Willy has already known three teams (Knicks, Hornets and Pelicans) while Juancho will play in his sixth franchise in seven seasons: Nuggets, Wolves, Celtics, Spurs, Jazz and now Raptors. Neither has settled as a starter and between the two they have 12 playoff games.

If something defines the family, it is the tenacity with which the mother already fought and stirred in the painting. They are hard to peel. On January 25, the Pelicans center scored 29 points against the Sixers, his personal record. His brother has his best mark since 2017 in the 27 points he scored in Denver against the Warriors, with six triples. A mononucleosis in his second year in the NBA cut short his progression and last summer the Timberwolves banned him from the Games.

But on Sunday in Berlin Juancho once again had one of those inspired days from the outside line. He hit seven three-pointers, approaching Sasha Djordjevic's record of nine in a Eurobasket final, when his tournament-high was two. An irruption at the crucial moment. Like that of Bo Cruz, his alter ego, the name of his character in the movie Hustle (Claw), in which actor Adam Sandler is an NBA scout who discovers him playing on the street. “Objective accomplished, Bo Cruz. I love you, Juancho,” Sandler wrote on Twitter after the final.

Willy, more regular, has not dropped below 14 points in the nine European games and has been the leader of Scariolo's team, which again has two brothers as pillars to build a new winning team, picking up the baton from the Gasols, withdrawn from the national team after Tokyo 2021.

From Sant Boi to Las Rozas, the epicenter of the family has moved to the tattoo brothers. "The sky is the limit," reads Willy's right arm. "The Hernangómez have put their fists on the table", congratulated Jorge Garbajosa, president of the RFEB. "My brother and I have eaten a lot of shit, it has been a lot of work in the shadows," Willy puffed out his chest in a Hollywood movie ending for the Hernangómez Geuer brothers... or Cruz.