Thiago adds to plague of injuries in Liverpool midfield

The premiere of a new and exciting season is indigesting Liverpool more than expected. 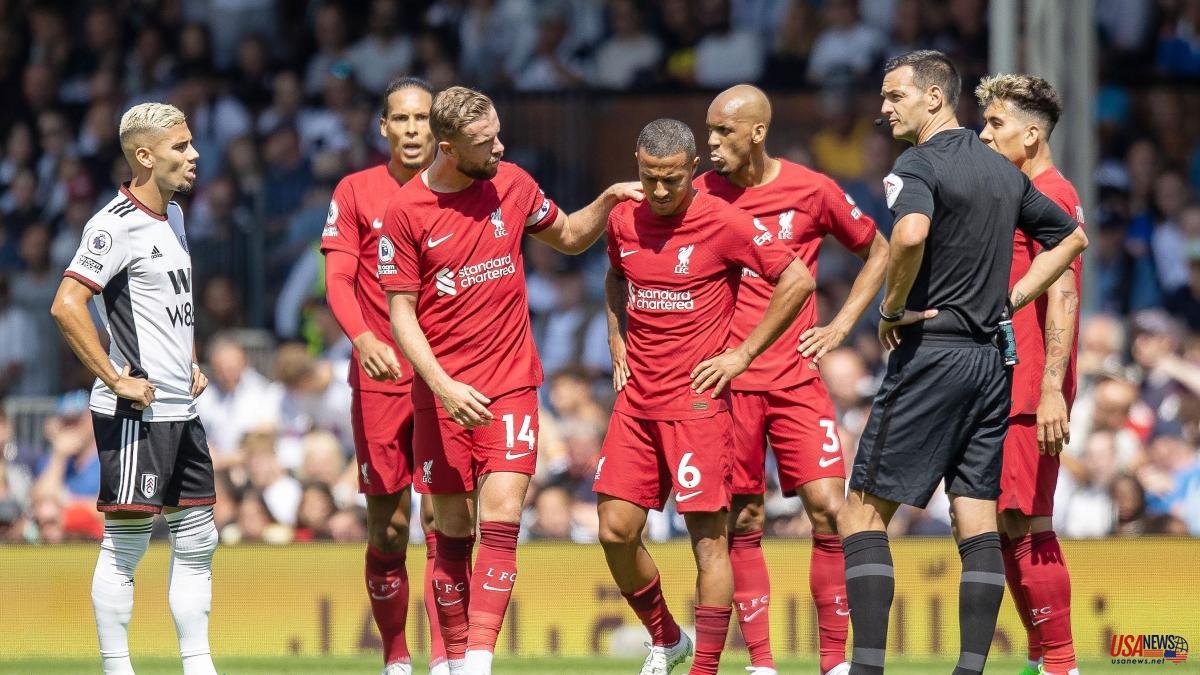 The premiere of a new and exciting season is indigesting Liverpool more than expected. On the one hand, already at a disadvantage in the race for the Premier League that seemed (and still seems) a matter of two. While Manchester City defeated West Ham away from home with a devastating Erling Haaland, Jürgen Klopp's men were unable to pass the draw against a subdued Fulham, but dangerous in the open field and with an Aleksandar Mitrovic that caused the giant Virgil Van Dijk to feel strangely small. Added to the scratching point against a recently promoted player is the injury of Thiago Alcántara, who had to retire in the 51st minute with a hamstring problem and who, according to The Athletic, will be out for a month and a half.

The Spanish footballer is in charge of marking the times of the game for the net team, approaching to receive and build from behind, accelerate and filter vertical passes or provide pause and move the opposing team across the pitch. Without him, Klopp's 'rock and roll' loses control and handling of the ball. It is true that this Liverpool was already champion before Thiago, surely with a more dizzying football and not so dominating from possession as from pressure. The problem now is that injuries are devouring the team's midfield and the German coach is running out of options.

The entrance door to the club was closed at the end of the pre-season. "The last thing on my mind is that we have to make more signings. I really don't understand the discussion," the former Borussia Dortmund manager said then. However, Thiago's injury adds to a list of casualties that could condition Liverpool's line-ups in the coming weeks. Naby Keita missed the league opener due to illness, Curtis Jones has been out since the last warm-up friendly due to a problem "derived from stress" and Oxlade-Chamberlain also injured his hamstring in the friendly against Crystal Palace and could miss several games .

After the setback caused by the loss of the former Bayern Munich player, in principle, until the start of the Champions League group stage, Klopp has again opened the possibility of some last-minute addition to the transfer market to alleviate the plague of physical problems in midfield. "I know the debate that is going to arise now. I said that we did not need a midfielder because we had enough, and we really do. The problem is that we are being punished for something that is not our responsibility, things like that can happen," the coach reflected in the press conference after the match against Fulham.

"No one could have imagined the problem with Curtis (Jones). Naby (Keita) is just sick and will be back the following week. The Oxlade thing happened before, and now the Thiago thing. We'll see what happens," he continued. Although he refuses to go back on his words at the end of the preseason, he does admit that with all these casualties, a gap opens up that requires a solution. "A transfer would make sense now, also in the long term. We still have enough midfielders, it's not that we lack them. Some are just injured. We have to see how to react, but we can't panic," he assured.

Thiago, one of the most technically gifted players in world football, has always been prone to injury. His career is brilliant, but perhaps he did not reach the regularity that would have made him a midfielder of the time. Since landing him at Anfield Road, in 2020, in exchange for 25 million pounds, his participation with the team has been limited by his physical problems. In the 2020/21 season he played 24 games in the Premier League. Last season, one more. He was even on the verge of missing the Champions League final, to which he arrived with just enough strength. Without his metronome, Klopp is in big trouble.