The World Cup ball, the definitive tool to detect offside 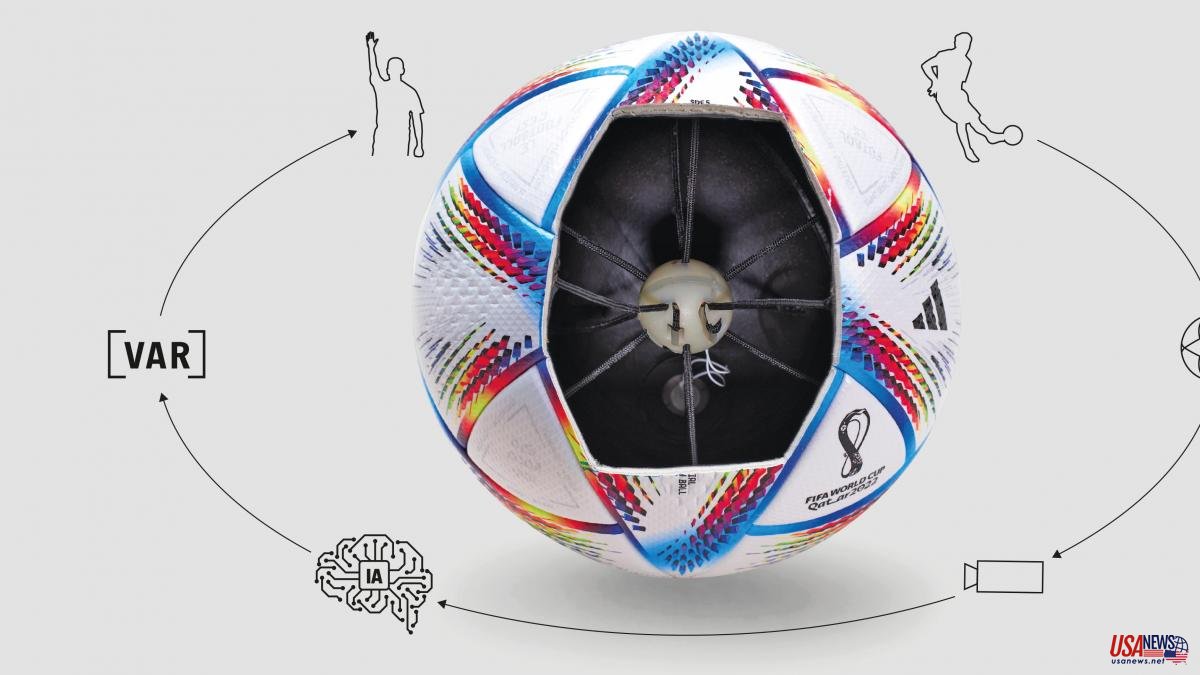 "Take a few steps forward," Billy McCracken, an early 20th-century defender for Newcastle, told his teammate in defense Frank Hudspeth. With this simple move, this mischievous Northern Irishman subverted rule number 11 of football for years, the of offside, which at that time was governed by the legislation of 1866 and stipulated that a player fell into an illegal position if he was more advanced than the third to last rival footballer, which unlike the current situation allowed having a more delayed defender to disable the attacker.

The 'magpies' became a practically impregnable team behind, imitated by other teams although turning football into a boring sport that caused the disaffection of the fans. A situation that in 1925 motivated the change of the standard to adapt it, in broad strokes, to the current version. More than a hundred years later, that subterfuge used by McCracken is a utopia with current regulations and the application of technology, which at the World Cup in Qatar will further increase the sophistication, almost bordering on perfection, in the detection of offside.

The players will be observed during the game by 12 cameras installed under the roofs of the eight luxurious Qatari stadiums. Surveillance will be permanent, with a follow-up of 29 points on each footballer's body, some 50 times per second, which will determine his exact position.

These tools, tested by FIFA both in the last Arab Cup and in the Club World Cup, and already used this year by UEFA in the Super Cup and the Champions League, have allowed the so-called 'semi-automatic offside' to come to light. “Sometimes the decision takes time on tight plays. We want to limit the time and be more precise, reduce human error”, explains Pierluigi Collina, former referee and head of the FIFA Referees Committee.

As if that were not enough, another element will be added in the emirate to eliminate the slightest margin of error: an inertial sensor (IMU) that will be installed in the center of the tournament ball, the Al Rihla. The new ball, developed by Kinexon and which has a rechargeable battery, will send data 500 times per second to specify where and when each touch of the ball occurs. All the parameters will be sent to the VAR room. From controlling the ball, the players will become controlled by the ball.

The information from the cameras and the ball will be merged to detect offside, which will not be automatic because the last word will be in the VAR. Those in charge of video arbitration will receive the result of the technology, but they will have the power to manually check the play on the screen before notifying the field referee. When the decision is final, a 3D animation of the action will be created, marking the points where the offense occurs, which will be seen on the stadium screens and on televisions with rights.

"I didn't like to be wrong either," recalls Collina, designated by the IFFHS as the best referee in history, about a time, the 80s, 90s and early 2000s, when offside coexisted normally with the error. Goals, matches and even tournaments fell from one side supported by the mistakes of the human eye, which according to several studies is incapable of accurately judging an offense that is decided in less than a second. Saccadic movements, those made by the eye quickly and briefly, detect offside, but the disposition of the players (they may be in different visual fields) and fatigue increase the latency that causes the failure.

Not only referees, but also clubs and footballers have surrendered to the empire of data to improve performance and avoid injuries. In Qatar, players will have access to a FIFA app that will contain comprehensive data collected by analysts, cameras and algorithms on their match performance. In turn, fans will have at their disposal on the Internet a service created by FIFA's High Performance Programs Department, led by Arsène Wenger, which will provide them with multiple parameters. These innovations follow the technological path started with the inclusion of VAR and the automatic resolution of a ghost goal, which will also be present in the World Cup. Qatar will be a laboratory, a sample of the football of the future, with an increasing presence of artificial intelligence. Nothing to do with the time of McCracken and company