The president of the Generalitat Valenciana, Ximo Puig has announced that the Consell will approve this Friday the extension in 700 million euros of the endowment of the plan Edificant to realize 264 performances in educational centers of the Valencian Community. 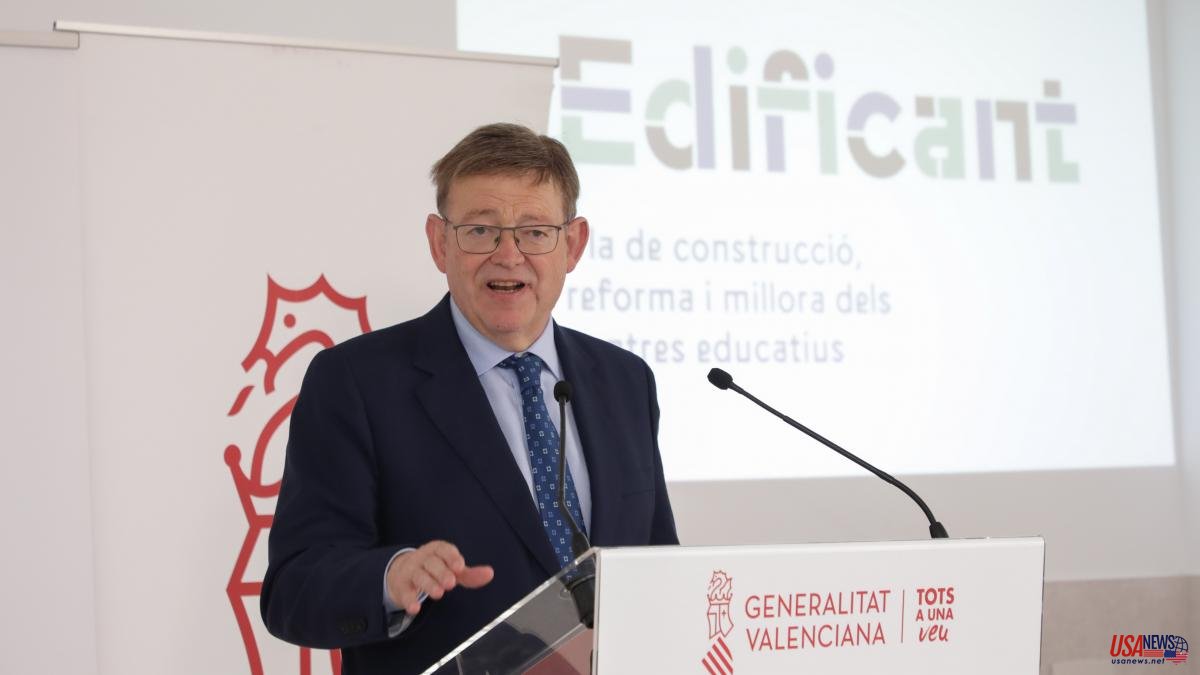 The president of the Generalitat Valenciana, Ximo Puig has announced that the Consell will approve this Friday the extension in 700 million euros of the endowment of the plan Edificant to realize 264 performances in educational centers of the Valencian Community.

This was stated during the presentation of the actions that will be carried out in school infrastructures, which was also attended by the Minister of Education, Culture and Sports, Raquel Tamarit, and the Minister of Finance and Economic Model, Arcadi Spain. The event was held in the new Secondary Education section of the Clot del Moro Secondary School in Algímia d'Alfara, which involved an investment of 4.7 million euros, also included in the Edificant Plan.

During his speech, the president highlighted that the priority objective of the Consell is to "guarantee equal opportunities" which involves offering quality education, which includes making "the best space" available to schoolchildren and valuing the educational task of the teaching staff.

Likewise, he has assured that "without education there is no social cohesion or territorial cohesion" and has pointed out that offering the best conditions also means rooting young people in their territory.

Ximo Puig explained that with the expansion of the economic endowment, the Edificant plan will reach 1,700 million euros until 2029, which will allow the renovation of "more than 70% of the Valencian educational architecture".

In the same way, he referred to the plan's contribution to accelerating the construction process of the new centers that taught their classes structurally in barracks and where 8,000 boys and girls studied, as well as the "alliance" between city councils and the Generalitat for its execution.

In a statement, the Valencian Government has explained that the new investment of 700 million euros is added to the 1,000 million that the Generalitat has allocated, between 2018 and June 2022, to 671 actions that have made it possible to improve educational infrastructure.

Specifically, they have indicated that among the planned actions are 255 works that will involve an investment of 461 million euros, of which 25 will be carried out in the province of Castellón, 64 in Alicante and 166 in Valencia. These actions respond to new requests from municipalities that the Ministry of Education has already accepted.

During the event, the president referred to the Consell's commitment to "give a new impetus" to Valencian Vocational Training as a direct path to quality employment, and assured that this training constitutes a "fundamental pillar" for the reindustrialization of the Valencian Community.

In this sense, the Edificant Plan contemplates the construction of 6 new Integrated Public Vocational Training Centers in Castelló de la Plana, Vila-real, Gandia, Dénia, Sant Joan d'Alacant and Guardamar del Segura, for which 90 millions of euros. This is yet another example of the Consell's commitment to modernizing Valencian FP with new infrastructures, expanding the educational offer and adapting training to the needs of the productive sector in each environment.

For her part, the Minister of Education, Culture and Sports, Raquel Tamarit, has assured that from the Consell “we do not make promises of smoke, the Botànic has always built. We roll up our sleeves, action by action”, in the same way that he has pointed out that the procedures for bidding for works are not always carried out “as agile as we would like”, although all the town councils and educational communities that need it “hold meetings with us to resolve , seek solutions to cases and carry out everything that is needed”.

Tamarit has pointed out that in addition to building the centers that were born in barracks "without the project of former governments", the Ministry has arranged and expanded many other centers. “We firmly believe in public and quality education, and to carry it out, the spaces where educational projects are developed are fundamental. And we are doing this in many cases hand in hand with the municipalities”, added the Minister of Education.