The Supreme Court has ensured that the former president of the Junta de Andalucía José Antonio Griñán was "aware of the illegality" of the criteria followed with the EREs while highlighting his "passivity" in the face of "waste and arbitrariness" with the that the aid was granted, as stated in the 1,205-page sentence that was released this Wednesday and whose ruling had been advanced on July 26. 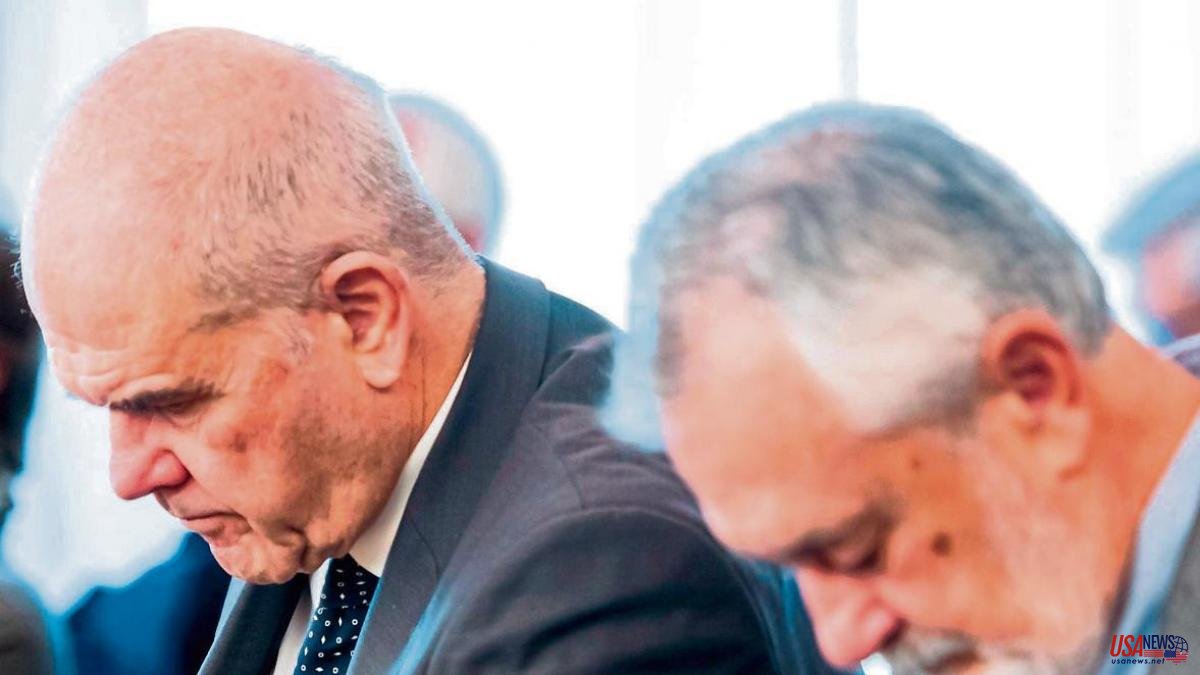 The Supreme Court has ensured that the former president of the Junta de Andalucía José Antonio Griñán was "aware of the illegality" of the criteria followed with the EREs while highlighting his "passivity" in the face of "waste and arbitrariness" with the that the aid was granted, as stated in the 1,205-page sentence that was released this Wednesday and whose ruling had been advanced on July 26.

Thus, the high court has confirmed the conviction of the former presidents of the Andalusian Government Manuel Chaves and José Antonio Griñán for the irregular use of regional subsidies for Employment Regulation Files (ERE). With the publication of the sentence it becomes final and therefore the prison sentences must be executed by the Provincial Court of Seville.

In this case, the main political and administrative officials of the Andalusian Government who intervened in the management, granting and payment of certain socio-labour aid were prosecuted.

The ruling concludes emphatically that Griñán "knew that the financing transfers were an illegal budgetary instrument, which served to circumvent the necessary controls in the granting and payment of socio-labour aid and also that in this management the procedure was completely breached established in the law, allowing the free management of public funds outside of any control".

The court considers that due to his position as Minister of the Treasury and later President of the Board, he cannot justify that he was not aware of what had happened, quite the contrary, "he had a central role in the preparation and approval of the budget regulations as a consequence of the powers assigned to their positions. In addition, the sentence recalls that he had previously held the position of minister of labor and, therefore, cannot allege lack of knowledge.

The Supreme Court maintains that it is not credible that any of Griñán's subordinates or people he trusted communicated to him the problems generated by the financing of social and labor aid and the illegalities that had been taking place in the approval and management, "despite the fact that the reports followed each other year after year and referred to a blatantly illegal action".

Nor does the court accept the argument of the socialist leader that he was not aware of what happened when the payment of aid was one of the "relevant axes" of the political action of the Government of which he was a member and members of said Government, including his president, intervened directly in the management and granting of various grants.

"It is also contrary to reason to suppose that Griñán did not read any document, not even those that warned of illegalities, nor that he was not informed by any of the authorities that were under his supervision and that were hierarchically subordinate to him," adds the sentence. .

The Supreme concludes that Griñán had enough information channels to know what was happening. "All of this leads to the inference from criteria of rationality and common sense that Griñán was aware of the illegality of the budgeting criteria that had been used to avoid compliance with the regulations on subsidies and was also aware of the illegalities that had been taking place in the concession. and payment of the aid, making it possible with their passivity for this situation to continue throughout the period of time contemplated in the sentence".

Regarding the former Andalusian president Manuel Chaves, convicted of prevarication, the sentence concludes that the aid was a central axis of Chaves' political action and it is entirely "logical" to assume that he was aware of the aid that was granted and its approximate amount. , at least the most relevant.

For the Supreme Court, there is enough evidence to show that Chaves was aware of the change in the budgeting system, its illegality and the purpose pursued. "He dictated, therefore, different resolutions knowing their injustice and kept an illegal system in force to grant social and labor aid in accordance with discretionary criteria contrary to the applicable regulations," he adds.

Thus, he points out that the granting of socio-labour aid was one of the axes of his political action and the change in the budgeting and concession system had its origin in the difficulties that had been occurring in the payment of aid: "it is completely irrational suppose that the president of the Junta de Andalucía was not aware of this matter".

Therefore, "the indications referred to in the judgment allow us to affirm with sufficient solidity that Chaves knew the illegality of the new system established and the purpose that was pursued with it. These indications are plural, they all converge in the conclusion of the knowledge that is affirmed, they are based on accredited facts and have been assessed with criteria of rationality to which there is no objection. The alternative hypothesis is completely unreasonable".

The resolution declares that the different people in charge created and maintained a system for granting social and labor aid to avoid any administrative control, disposing of public money in a discretionary manner and outside all legality.

The sentence for continued crime of administrative prevarication is maintained to those who granted the aid and to the different authorities that intervened decisively in the approval processes of the budget items that allowed their granting and payment, knowing that they approved them through a illegal legal instrument (financing transfers) and with the purpose of eluding the prior control of the Intervention of the Junta de Andalucía and the rest of the subsidy regulations approved by the Andalusian Parliament.

The sentence also confirms the conviction for continued crime of embezzlement of public funds to those who granted and paid the aid and to those who allowed it to be paid knowing that very serious illegalities were taking place in the specific management of the same.

The Supreme concludes that the socio-labour aid was financed by carrying out an illegal budget classification that had the purpose of eluding all administrative control. The instrument that was used for this purpose was the so-called “financing transfers” and the judgment declared that, in accordance with the applicable legislation, the financing transfers could not be used to pay socio-labour aid, given that this financial instrument it is only intended to cover the operating costs and capital needs of public enterprises and not for the payment of subsidies.

In this case, these requirements were not met. The aid referred to in the process was managed and approved freely, discretionally and with a complete omission of the legally established procedure.

The magistrates understand that the activity of the accused was not limited to using an illegal budgeting criterion to grant such aid, but that, in addition, public funds were disposed of "without any control and outside of any regulated criterion."

The ruling states that the aid was paid to workers immersed in restructuring processes without carrying out the multiple controls that the laws establish before and after its granting and the budgeted money was also used for other different purposes, without even fulfilling the purposes provided for in the corresponding budget sheets.

The court considers the "lack of control in the management and payment of aid" to be accredited by the content of an expert report prepared by officials of the General State Administration and ratified in the trial, as well as by different testimonies and documents.

The Supreme Court focuses on the knowledge that the main leaders of the Board, including Griñán, had of the reports of the Delegate Intervention of the Ministry of Employment in which it was recorded "in detail the multitude of irregularities that were coming producing".

"In successive years, other reports from the Intervention of the Junta de Andalucía were known that alluded to the illegality of the system that was being used, despite which the different managers of the funds did nothing to avoid the situation," he warns.

The sentence has a particular vote of the magistrates Ana Ferrer and Susana Polo. In his opinion, the crime of embezzlement imposed on five defendants (José Antonio Griñán, Carmen Martínez Aguayo, Francisco Vallejo, Jesús Rodríguez Román and Miguel Angel Serrano) does not comply with the law. The reason is that although they acknowledge that they facilitated the implementation of an illegal procedure with their actions, "they intend to condemn them not only for a crime of prevarication, but also for a crime of embezzlement derived from the conduct carried out by the authorities and officials of the Ministry of Employment in the final phase of the execution of the budgets".

In his opinion, these conducts consisted of distributing and distributing the amount of the subsidies in favor of people and companies that lacked the right to them. The two magistrates maintain that none of the five defendants intervened in these fraudulent acts of the final stretch of the execution of the budget, nor were they aware that they were being carried out by authorities and officials of the Ministry of Employment.

"Despite which, and without any evidentiary basis for it, they were sentenced for the crime of embezzlement by virtue of an alleged eventual fraud that was not proven in any case," they conclude.