The superior being is Mbappé

They will do as if nothing, as always, but at Real Madrid they will curse for a long time the day that Mbappé succumbed to pressure from his country and rejected his million-dollar proposal. 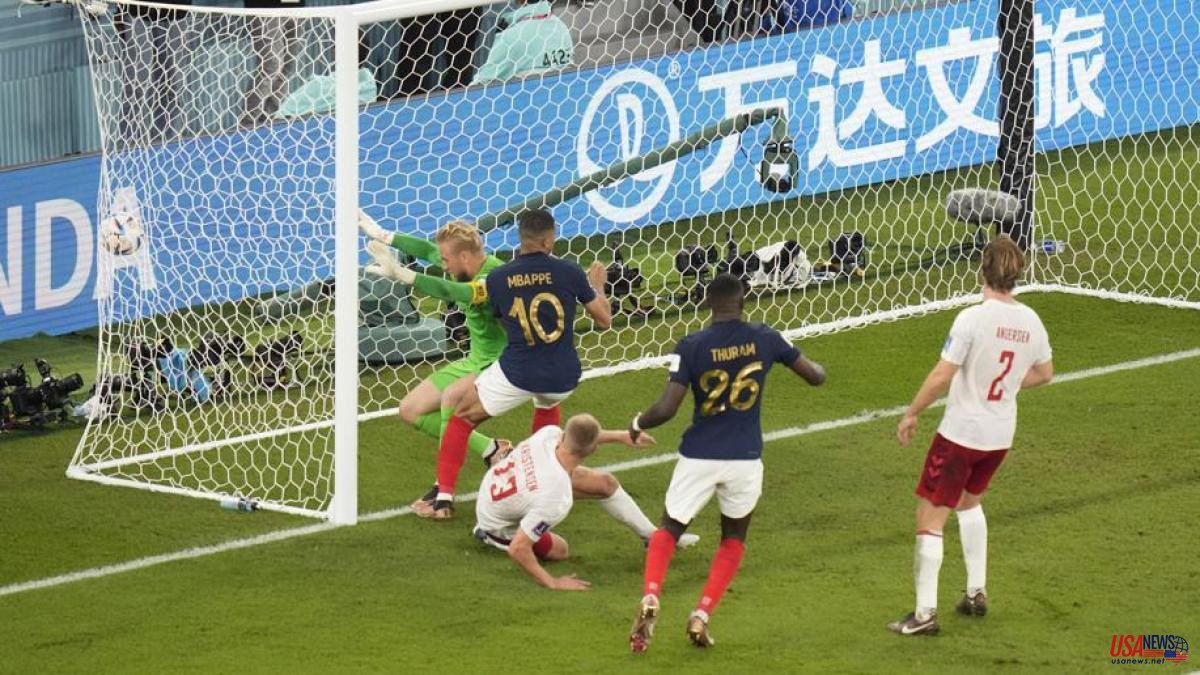 They will do as if nothing, as always, but at Real Madrid they will curse for a long time the day that Mbappé succumbed to pressure from his country and rejected his million-dollar proposal. The PSG star is currently a footballer from another planet, as Messi was for so many years, capable of unbalancing anyone who dares to get ahead. This Saturday, France became the first team to qualify for the round of 16 in the World Cup and all the credit was theirs, with two goals that put an end to Denmark's always tough resistance.

The duel also had its touch of Barça flavour, with Barça as the most represented team on the green of the cozy 974 stadium, with Koundé and Dembélé taking over France's right wing and Christensen prioritizing the Danish defense as a libero. It was the Barça winger who stood out the most in the first half, practically all the goal options that France had being born from his boots, which were a few without ever finding the net of a gigantic Kasper Schmeichel, who was followed well by his father up close from a box.

With an endless offensive flow, the blues attacked in waves but they lacked forcefulness. After a brave start, Denmark gradually closed in on their field, trying not to fall to the canvas as best they could, looking for a counter that didn't come. With their feet or with their heads, the French attack was a nightmare for the Nordic defence, which not even an enviable physique was worth to prevail over the French moles.

Maehle avoided the first by taking a header from Varane in a corner. Dembélé did what he wanted on the right wing and Giroud was unable to comfortably finish off one of his crosses. Yes, Rabiot did, but his header was deflected by Schmeichel with a small decoration for the camera. Shortly before, Christensen had risked the expulsion, forced to correct by grabbing Mbappé, much faster than him in the race. The recital began. Marciniak only showed him yellow.

Between Maehle and Nelson they had nightmares to contain Dembélé. On the other hand, the Danish attack was rickety and only Cornelius, in a very isolated counterattack, worried Lloris a bit. Before going to the changing rooms, Mbappé missed a free shot after another good pass from Dembélé. Then he would fix it.

Denmark tried to grow in the second half with the entry of Braithwaite, stepping more into the area of ​​the world champion although never very clearly. The revolution tried to put out France. First, with a couple of flashes from Griezmann and Mbappé, who did not find a miracle goal. And after a quarter of an hour, with the first goal of the night on the shores of the Persian Gulf. The wall between Theo Hernández and Mbappé was lodged by the PSG star in the net with a shot that bounced off Christensen. The French were already winning by a landslide on points and finally transferred their superiority to the scoreboard.

But the Barça central defender made up for it, signing the equalizer after a corner kick, once again equalizing the forces. Lindstrom even threatened to surprise, forcing Lloris to show off. Everything indicated that the champion was going to leave homework for the last day but Mbappé had other plans, and finished off a good cross from Griezmann with his thigh so that the French crowd of 974 shouted with satisfaction. Yes, there is a superior being, but his name is Mbappé.

Incidents: Match of the second day of group D of the preliminary phase of the World Cup in Qatar played at the 974 stadium in Doha before 42,860 spectators.