The sentence of the Supreme intensifies the social conflict in the USA.

In just 48 hours this week, a justice with its unbalanced scales and without any blindfold for ideological questions has managed to aggravate a social and political polarization that seemed to have reached its maximum. 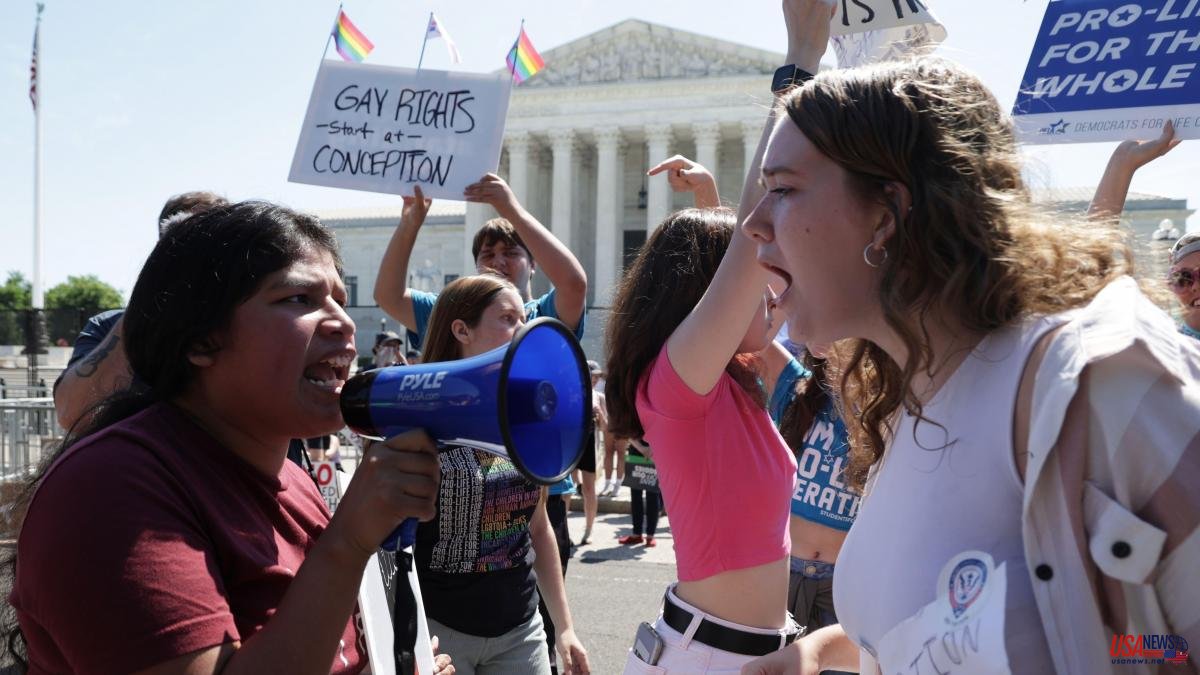 In just 48 hours this week, a justice with its unbalanced scales and without any blindfold for ideological questions has managed to aggravate a social and political polarization that seemed to have reached its maximum. A day after expanding the right of Americans to carry weapons on the street by striking down the requirement of "just cause" in force for more than a century in New York and other states, the ultra-conservative majority of six to three of the Supreme Court revived one of the largest and oldest conflicts within the country by ending the right to abortion in force for 49 years and opening the way for states to ban it. And all this five months before the mid-term legislative elections and when the committee on the assault on the Capitol instigated by Donald Trump accumulates evidence of a coup attempt with the then president still at the center of the plot.

The sociopolitical fracture for the right to the free interruption of pregnancy quickly moved to the map with the partition of the nation into two halves. It was immediately confirmed that, by virtue of the free bar granted by the Supreme Court, between 23 and 26 of the 50 states in the country would soon activate more or less harsh prohibitions on abortion, many of them with severe prison sentences for those who practice it. Nine of those states enacted criminalization laws on the same Friday, as soon as the Supreme Court made public the repeal of the Roe vs. Wade who protected the right since 1973. They are Missouri, Alabama, Arkansas, Kentucky, Louisiana, Oklahoma, South Dakota, Utah and Wisconsin. In another 14 to 17 territories with similar plans – in some it depends on political and judicial movements – the laws will be applied in weeks.

There will be struggle and there will be races: within each state and between each other. As for internal struggles, the clearest example is Pennsylvania. There, Democratic Governor Tom Wolf has vetoed three anti-abortion bills approved by the state House, in Republican hands. In the midterm or midterm elections in November, the election of a new governor will determine whether pregnant women in this state who want to interrupt their pregnancy will be able to do so in the future. The Republican candidate, Doug Mastriano, has promised to make abortion illegal, in the same way that the Democrat, Josh Shapiro, promises to continue protecting this right.

Sixteen Democratic states have passed laws that shield such a right. All of them, and those who can join, are called to become a refuge for women for whom abortion in their state is a danger... or a chimera. The closure of clinics that offer the service – which is already a fact in states with a ban in force since before Friday's ruling – will be inevitable.

According to the family planning and pregnancy termination organization Planned Parenthood, at least 36 million women of reproductive age could lose access to abortion in the United States as a result of state laws that are prohibiting it as a result of the Supreme Court ruling. Those that can or receive support will be able to do so in states where the practice is still legal. But the effect of the sentence will be "devastating" for many vulnerable women without means, "especially within black, Latino and indigenous communities, among immigrants and those with disabilities," the entity said.

Both the suppression of the right to abortion and the expansion of the right to carry weapons in public places, the latter adopted in full mourning for the shooting deaths of 19 children and two teachers in Uvalde and ten other people in Buffalo, go against what the majority of the population of the United States defends.

A recent Politico poll with Morning Consult put the proportion of voters who believe it is very important (41%) or somewhat important (18%) that lawmakers pass tougher gun laws at 59%. This is how Congress did it by approving on Friday a law agreed between Democrats and Republicans that, for the first time in thirty years, toughens access to weapons for the youngest. But the progress of such measures is less than the setback of the Supreme Court ruling.

It is a fact that the High Court does not represent American society. Neither ideologically nor in terms of beliefs. Six of nine magistrates are conservative, most of them extreme, in a country that voted Democrat in the last presidential elections. And also six –five from the right-wing bloc plus the progressive Sonia Sotomayor– are Catholic in a nation where barely 22% of citizens belong to this faith.

Ideologically, the imbalance of the highest jurisdictional body in the United States is not accidental, nor is the sentence against abortion. This is the most palpable legacy of Donald Trump, who already in the 2016 presidential campaign promised to nominate High Court judges not only of his own accord, in general, but also firmly committed to the anti-abortion cause.

When he arrived at the White House, and for almost a year before, the Supreme had a forced balance of 4-4. In February 2016, conservative judge Antonin Scalia had died. President Barack Obama then nominated Merrick Garland, a center-left jurist, today at the head of the Department of Justice and the US Attorney General's Office. But, despite the praise of many Senate Republicans for Garland, the leader of this party in the Upper House, Mitch McConnell managed to block his confirmation. McConnell hoped that in November 2016 Americans would elect a Republican president who would nominate one of their own and that the revamped Senate would ratify it. This happened, and on April 10, 2017, the conservative and traditionalist judge Neil Gorsuch swore in his position as the new Supreme Court justice. In this way the previous majority of 5 to 4 in favor of the right was restored.

The following year, another member of the Court, Justice Anthony Kennedy, announced his retirement. Although he had been appointed by Ronald Reagan, Kennedy supported gay marriage and abortion rights. McConnell, again acting as Trump's battering ram in this area, managed to get the Senate to accept the controversial judge Brett Kavanaugh, a decidedly right-wing man who was weighed down by rape accusations that were diluted after a cursory FBI investigation widely criticized by the Democrats.

Trump finished fulfilling his electoral promise and his mission regarding the Supreme Court when, in September 2020, the progressive and feminist leader who was Justice Ruth Bader Ginsburg died at the age of 87. Just two months before the presidential elections, the president then dealt the final blow that ended any possibility of balance or internal consensus of the court on sensitive issues. To replace a defender of gender equality and reproductive rights such as Ginsburg, the president nominated the ultra-conservative and anti-abortion Catholic Amy Coney Barrett. Thus, the Supreme Court would have a conservative majority of 6-3, perhaps for years, and it was a matter of little time before the law established in 1973 would end.

In their Senate confirmation hearings, Gorsuch and Kavanaugh highlighted the importance of the Roe vs. Wade and avoided questioning him. Barrett, for his part, admitted that the doctrine was not untouchable, but pointed out that this did not mean that it should be annulled. Now, in view of the sentence, it is obvious that the three magistrates were hiding what they were really clear about: the right to abortion had to be ended. You had to do what Trump said.