The Roman domus with Egyptian gods under the Baths of Caracalla

From now on, visitors will have a new incentive to go to the Baths of Caracalla. 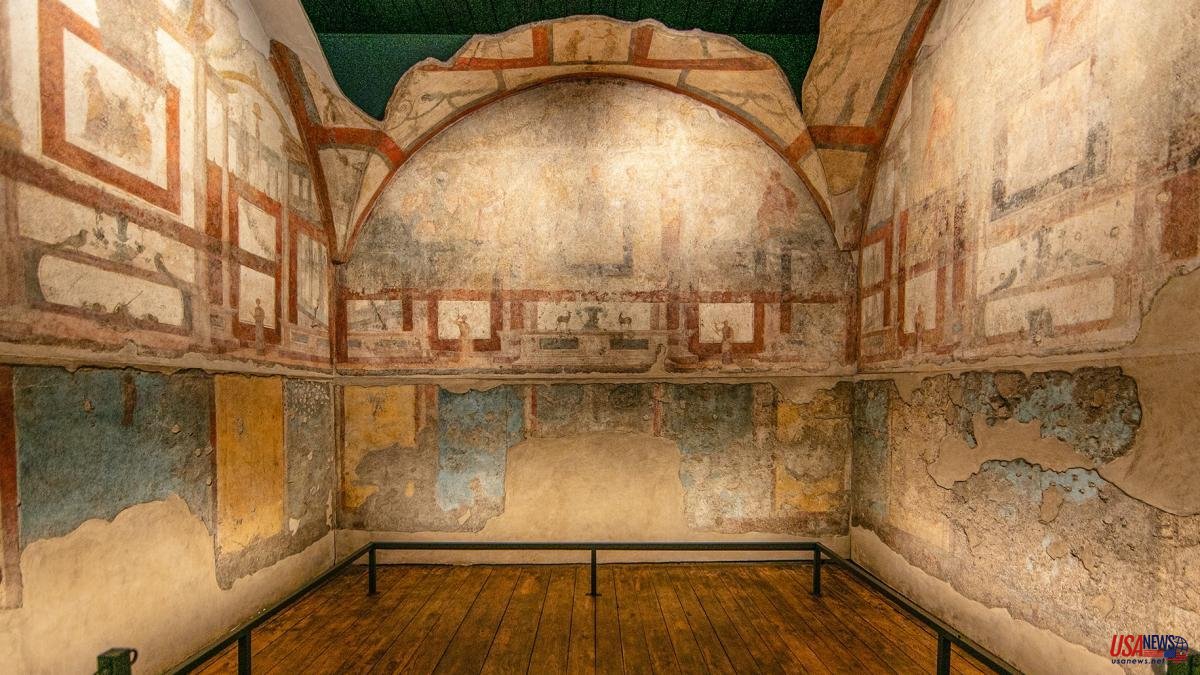 From now on, visitors will have a new incentive to go to the Baths of Caracalla. The monument has extended the route by opening to the public the reconstruction of a Roman domus that was located in the neighborhood that was destroyed to erect the great hydraulic complex, inaugurated in 216 AD. And it makes it even more spectacular by exhibiting its frescoes with, among other things, representations of three Egyptian gods together with the Capitoline triad, in a rare domestic example of the coexistence of religions in ancient Rome.

It is the first time in 30 years that this room can be visited. It is a small cult room inside a domus from between 134 and 138 AD, during the time of Emperor Hadrian, which was found ten meters below ground a short distance from the great imperial complex of public baths.

It was discovered during excavations in the mid-nineteenth century, but fell into oblivion until it was rediscovered in 1970 and, after five years of study, archaeologists decided to detach the frescoes to protect them from moisture and store them in storage. Among them, those that today already enrich the itinerary of the baths, which have been placed within the monumental complex next to the baths, mosaics and gymnasiums of Caracalla.

In addition to being a rare witness to what happened in that area before the construction of the baths and the transformations of the city, the paintings are a good expression of the religious syncretism that characterized Rome from its origins. The most recent traces are preserved (from the final decades of the II AD) of anthropomorphic figures identifiable with the Roman gods Jupiter, Juno and Minerva, and the Egyptians Anubis, Isis and her husband, Osiris, something that was common in public buildings but not in the privacy of a house.

“It is not uncommon to find Egyptian and Roman gods together, but it is the first time they have met in a domestic environment from that time. It is also rare that they are separated and not united in the same figure with different characteristics, as used to happen”, explains Mirella Serlorenzi, director of the Baths of Caracalla.

“The Romans had no problem with the other cults. They only had it with the Christians, because they stopped worshiping the Roman gods”, points out the archaeologist. In fact, in this place is the largest known mitreo, or temple dedicated to the oriental god Mitra.

Also on display for the first time are the restored frescoes of the vault of the triclinium, the domus' dining room, which have been reconstructed from the hundreds of pieces found in the 1970s. The paintings are made with rich pigments, such as Egyptian blue or cinnabar red, which came from Iberian mines, something that indicates that their owner was a person of high class. "Perhaps he was a merchant who traveled a lot to Egypt," Serlorenzi ventures to speculate, referring to the representations of Egyptian gods.

The special superintendent of Rome, Daniela Porro, applauds that now visitors will be able to "pick up a piece of the history and transformations of the ancient city, in addition to the beauty and interest of the paintings", with the same entrance ticket to the complex monumental. The Baths of Caracalla are thus reborn after the pandemic in a summer in which they will also once again be the scene of the traditional summer opera in Rome.