The internal consultation of Junts per Catalunya on the continuity of the party in the Government of the Generalitat starts tomorrow and the leaders are taking positions. 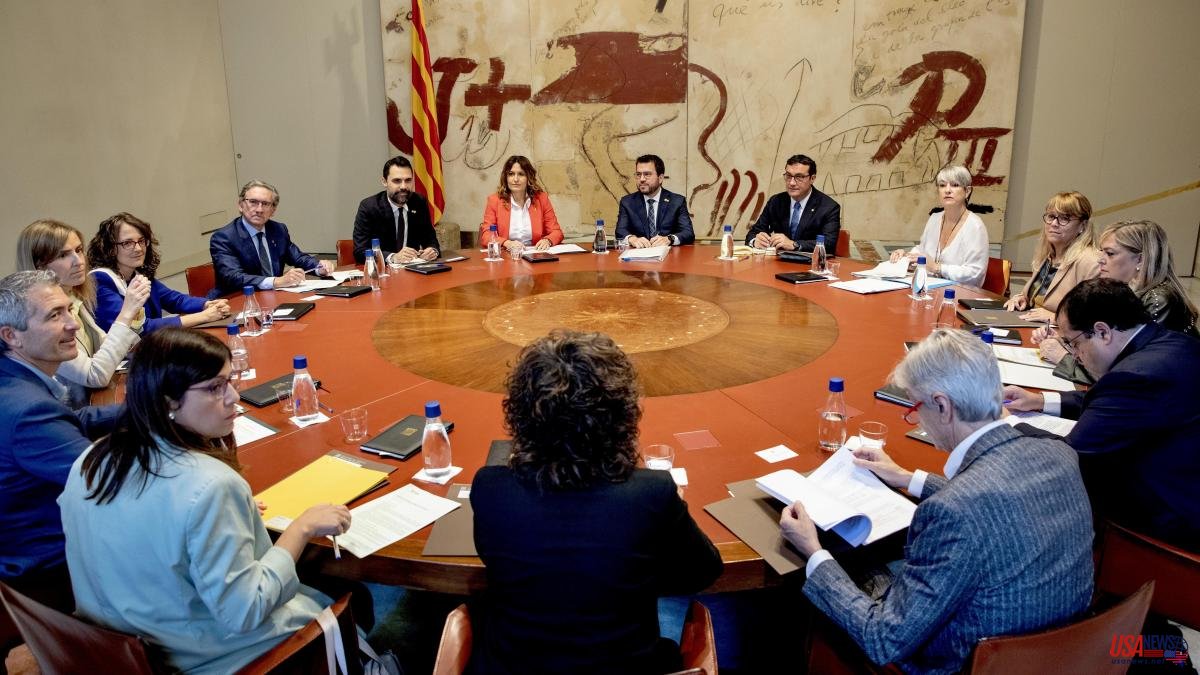 The internal consultation of Junts per Catalunya on the continuity of the party in the Government of the Generalitat starts tomorrow and the leaders are taking positions. The party's leadership has not planned any campaign to use, with debates, events... and the executive will not issue a position. But although the leadership remains neutral, the party leaders have spoken freely and all eyes are on the secretary general, Jordi Turull, who at Tuesday's press conference said that "he would not in profile” and that he would explain to the militancy what he thinks and what the meaning of his vote will be. Meanwhile, Pere Aragonès awaits the result.

Laura Borràs, president of JxCat, for her part, assures that she has not yet revealed what she will vote for, but with her statements – both those from months ago and those from now – everything is more than said. Even so, she plans to send a letter to the affiliates with her position against remaining in the Government.

When Turull was asked if he would defend a position different from that of Borràs, he implied that he would not, that they always go to one o'clock and in the environment of the suspended president of the Parliament they understood that they would say the same thing. He also assured that his "obsession" is that there is no internal rupture in Junts, a risk that other leaders admit.

But it has not yet been pronounced in any way. Be that as it may, the participatory process has revealed strong divisions within JxCat.

The institutional or pragmatic sector of training, the one that supported Turull in the Argelers congress and in La Farga de l'Hospitalet in a majority way and that in internal processes has supported its candidates, is for continuity in the Government. Ministers close to the Secretary General such as Lourdes Ciuró and Violant Cervera have not hidden their position these days and this sector is mobilizing for the consultation.

With these wicks, there are not a few people who believe that the leader of the formation should stay out of it, because of what may happen next. He himself kicked the ball forward when he was questioned about what could happen if the militancy supports an option contrary to the one he defends.

Faced with such an important matter to decide, the electoral union of the consultation has sent an email to the militants so that they can check if they are registered correctly and will be able to vote in the digital area of ​​the affiliates. In the internal chats there are already arguments in favor or against continuing in the Catalan Executive and the leaders of the formation with more visibility have used the networks or the media loudspeakers to establish their position.

Borràs on TV3 said that we are facing a “collision” government rather than a coalition government and assured that if the Republicans end up governing the Generalitat alone, we would be facing an “illegitimate” and “fraudulent” Executive.

For his part, Jordi Sànchez, former secretary general of the formation and architect of the agreement with Pere Aragonès, on the same channel, spoke in favor of maintaining the coalition, because if not "it will take many more years for independence unity to become a reality".

Minister Victòria Alsina has just joined the formation to have a voice and a vote in management meetings and to campaign. Said and done. Yesterday in an act with mayors and councilors of the province of Girona, he warned that leaving the Government eight months before the municipal elections is "a leap into the void". “It is not the same to face this challenge while being in the Government than being the second force of the opposition”, she stressed.

"The founding objective of Junts is to achieve independence, and having the platform that the Government represents is the only way to make it possible, it is the trench that allows us to work together," concluded Alsina, who also, in an interview with El Nacional pointed out that "it is easier to oppose ERC from within the Government and raise our voices" than from outside.

The Minister of Economy and Hisenda, Jaume Giró, took advantage of a questioning by Ciudadanos in the Parlament on taxation to ask that decisions be made with "waist" in addition to "head and heart" and stressed that "each partner of the coalition has to understand that he has to be in the Government as long as he thinks that he can contribute more value to the citizens and to the country by being there, than not being there”. Likewise, he assured that now he is more concerned than ever about the "stability" of the Government so that Catalonia has good budgets.

Leaders such as Xavier Trias, who must make a decision about his candidacy in the Barcelona municipal elections, or former Minister Joaquim Forn, as well as other prominent Junts cadres, have also been on the side of remaining in the coalition.

In the Borràs and Puigdemont circles, as well as some deputies such as Joan Canadell, Cristina Casol or Salvador Vergés, they have spoken out in favor of breaking up. However, there are other leaders in prominent positions in the formation who have been more cautious and have saved their opinion for the vote.

The militancy will make a decision between Thursday and Friday and there are those who believe that no matter what happens, JxCat will come out divided and weakened. The role of the leaders, whatever happens, will be complicated, since they will have to rearm the space with an eye on the municipal elections of May 2023 and try to sew up the wounds that the consultation may leave as a balance. Sources consulted in favor of the rupture, as well as others inclined to continue in Palau, admit the risk of rupture depending on what happens.

Aragonès is waiting, with a whole list of future councilors about to be sealed in case the flies and Junts militancy prefer that his formation get off the wagon.

The president of the Generalitat yesterday led a Consell Executiu with the absence of Jordi Puigneró, dismissed last Wednesday as vice president. There he gave his opinion to all the ministers: he asked those present to "be 100% and working to the maximum", without avoiding referring at the same time to the possible fracture between ERC and Junts. The head of the Government is committed to the continuity of the Catalan coalition Cabinet. If you take into account that he decides what the Junts militancy decides, he will not call elections, as he stated, the conclusion is clear: Aragonès will maintain the Govern no matter who falls, even if ERC is left alone in command.

Aragonès works on a plan in case the split occurs. "The Government and the president do not improvise," remarked the spokeswoman for the Catalan Executive, Patrícia Plaja, who added that the decisions will be made by the head of the Government "with agility and in the shortest possible time."

However, Plaja did not clarify whether the president has some names in mind to occupy the positions that the Junts ministers could leave, or instead some restructuring is planned if Junts lets him run. The spokeswoman acknowledged that yesterday's ordinary meeting took place in "a context that is exceptional" because the composition of the current coalition government has to be studied by the Junts militancy.

The president told the ministers that what might happen this week "is important" to clarify the political panorama in Catalonia, but above all he stated that "the internal debates" in Junts must be resolved, "or at least those debates that can condition the proper functioning of the Government”.