The King has tea with Charles III at Clarence House

Felipe VI and his British counterpart, Carlos III, held a private meeting this Monday at Clarence House, taking advantage of the Spanish monarch's trip to the British capital to attend the dinner commemorating the 135th anniversary of the creation of the Chamber of Commerce from Spain in the UK. 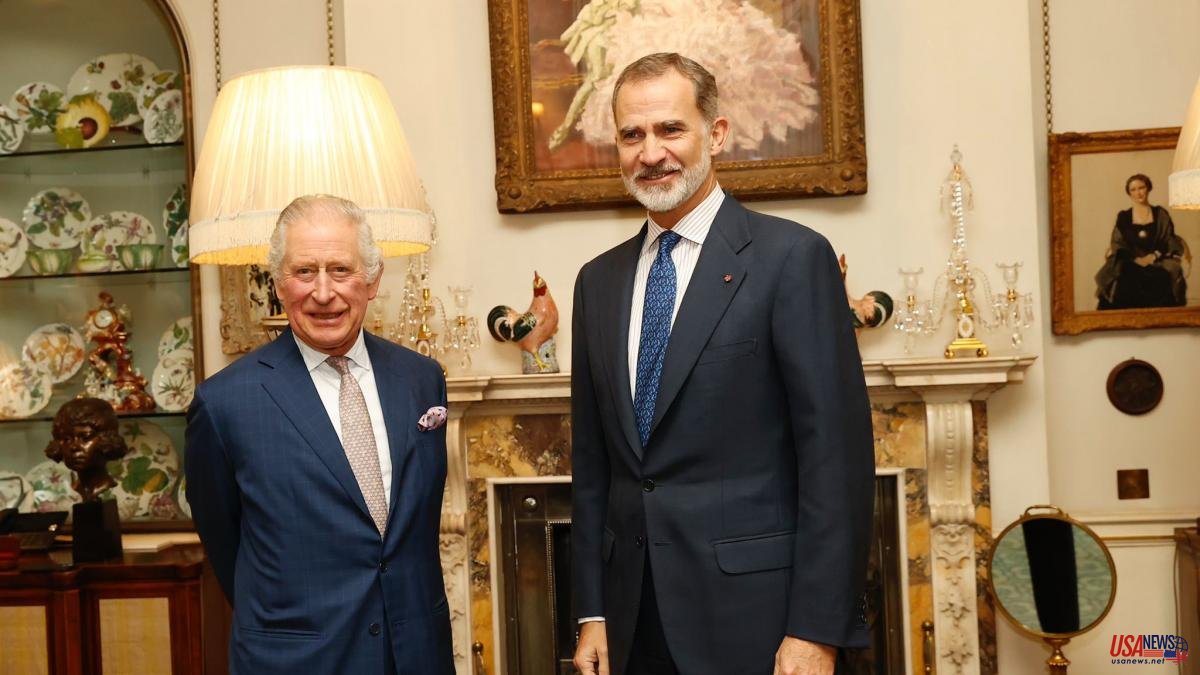 Felipe VI and his British counterpart, Carlos III, held a private meeting this Monday at Clarence House, taking advantage of the Spanish monarch's trip to the British capital to attend the dinner commemorating the 135th anniversary of the creation of the Chamber of Commerce from Spain in the UK. La Zarzuela reported this afternoon about this meeting that took place at tea time in the residence where Carlos and Camila have always lived, which also marks the familiarity between the two monarchs.

Carlos III, unlike his mother, has given up moving to live in Buckingham Palace, which has remained, like the Royal Palace of Madrid, for official acts.

The monarchs, who have maintained a cordial relationship for years due to the kinship ties of both royal families, have met alone for the first time, after the proclamation of Carlos III, since, last September, they saw each other during Funerals for Queen Elizabeth II. Kings Felipe and Letizia, as well as Juan Carlos and Sofía, attended the reception that Carlos III offered at Buckingham Palace on Sunday, September 18, and, the following day, they were present at the funeral held at Westminster Abbey. The King, along with Queen Sofía, also attended the private ceremony that the family held in the St. George's Chapel of Windsor Castle, where Queen Elizabeth was buried.

Previously, Felipe de Borbón and Carlos Windsor had met on several occasions. The Prince of Asturias and the Prince of Wales exchanged official visits in the United Kingdom and in Spain; Already as king, Felipe VI traveled to London on a state visit and, later, coincided again with Charles of Wales in Windsor, when Elizabeth II granted the King the Order of the Garter.

Carlos III, 74, and Felipe VI, 54, met, the first still young and the second, still a child, in some family gatherings. They both had the opportunity to share vacation days in the summers of 1986, 1987, 1988 and 1990, when Carlos, accompanied by Diana, and their sons, Guillermo and Enrique, stayed at the Marivent Palace (Mallorca) invited by King Juan Carlos and Sofia.

After the meeting, the King went to the Landmark Hotel in London, where the Chamber's commemorative dinner is taking place, an institution whose objective is to promote commercial exchange between these two countries by acting as a connection between British and Spanish companies. Founded in 1886, it is a key institution in the development of economic and commercial relations between these two countries.

Located in London, the Chamber offers Spanish and British companies business promotion opportunities in both markets through a wide range of services, covering the areas of promotion, networking, information and advice, training, business development, business cooperation, logistic and administrative support.