In Cádiz - Barça last weekend the tragedy was chewed. 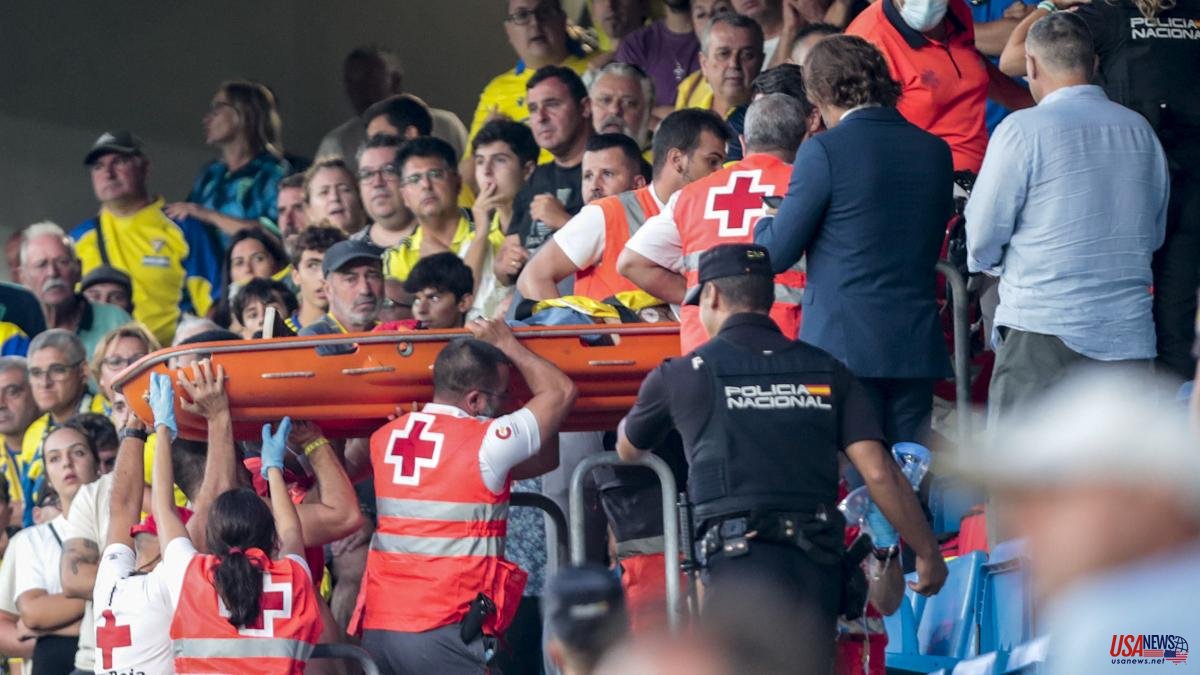 In Cádiz - Barça last weekend the tragedy was chewed. In the last minutes of the league match, a 69-year-old man fainted in Nuevo Mirandilla, suddenly losing consciousness. The rapid action, at first, of the doctors and nurses present in the stadium and then of the group of emergency professionals (061) saved the life of the fan who suffered the heart attack.

However, it is not gold everything that shines. That afternoon there were many errors that could have been fatal, according to Sergio Salgado, an emergency doctor from 061 who stabilized the patient in the stadium. Through a Twitter thread Salgado explained how he experienced it in the first person.

A harsh witness in which the Cadiz club does not fare well for not having the appropriate medical equipment and in which it dismantles the theoretical heroics of some of the protagonists, such as that of the nurse who initially treated the affected person -still admitted to the Puerta del Mar University Hospital- or that of the Barça defibrillator that Cádiz goalkeeper, Conan Ledesma, rushed to, who never even got to see.

The doctor, who claims not to seek prominence or notoriety, decided to reflect on what happened after "seeing and reading countless barbarities on social networks and in the press."

The first thing I want to say is what I write here I do as an individual and I do not speak on behalf of the service where I work, nor is it my intention to point out or harm anyone. I'm not looking for prominence or notoriety. I don't need any of these things. I only do this for my moral integrity and because my civil responsibility as a citizen and professional as an emergency doctor obliges me to make the truth known, especially after reading the Cádiz statement and that I will not qualify so as not to hurt sensitivities.

Those of us who work in out-of-hospital emergencies are tough people because of the situations we see and live in and that hardly affect us, but this time, my head keeps thinking not about what happened, but about what could have happened and what can happen in the future.

Our team is made up of a doctor, a nurse and a

When we get to where the patient is, we find several fans performing chest compressions and a familiar face: a medical colleague from @061EPES who was a spectator and full of bitterness tells me: luckily you have arrived, there is no material here at all .

There was no material for peripheral venous access, if there was, it had not been used. Was there a defibrillator? Yes, there was a defibrillator monitor, but it was not being used properly. The DESA that launched

In fact, the first heart rate trace you get is with our monitor when my

After several minutes of work with the invaluable collaboration of those who entered the chest compression wheel, the patient recovered his own heart rate and pulse, being pharmacologically silk-relaxed for technical and clinical reasons that are irrelevant.

It is at that moment when we consider starting the transfer and ask for the stretcher that is brought up from the field of play. The famous image of @JoseMariRota3 and the security guard in the stands.

Once the patient is on the stretcher, we get ready to collect our material and… surprise! Our INDISPENSABLE material for the continuity of care for a recently resuscitated patient in a very critical situation... has disappeared!

Airway backpack, circulatory access and medication backpack, attack backpack for COVID patients and tablet PC (which only serves to record assistance in the patient's medical history) had disappeared, leaving us helpless in such a complicated situation.

We decided to go down as quickly as possible to our ambulance, where we have more material and praying that the patient does not lose the little stability achieved, since we would have little chance of starting the fight again.

We transfer the patient to the hospital and our coordinating center informs us that they have located our material in the stadium, so we return to recover it and without knowing what had happened to it. Hours later, after having cleaned and replaced material, I begin to receive messages about the event and with great surprise I understand what had happened to our material.

The "hero" of the afternoon decided to take our material WITHOUT permission to attend to the cameraman in the grandstand, as if there was no one else in the stadium capable of doing that function, implicating players and putting the patient's life at serious risk. reanimated.

It is as if in the middle of a robbery someone takes a policeman's gun because he has decided that he is the only one who can solve it. In addition, it includes hazardous and biopolluting material that was tamped down. Result: more than 20 blisters that were inside, broken.

Critical situations in emergencies require order and leadership. This requires training and professionalism. Many doctors and nurses each acting in their own way will never get out of a situation like this, no matter how many cardiologists they are or how many medals they want to hang.

To the “hero”, congratulations for being able to identify a

And what seems more serious to me: the @cadiz_cf must have a self-sufficient health device that does not depend on external resources coming to pull the chestnuts out of the fire. With the resources present at the stadium alone, that patient would never have gotten ahead.

If we had been busy attending another service, that person would not have been with his family today and we would be talking about a drama. It's not a matter of hitting each other on the chest, it's a need to dot the i's and bring to light the reality of what happened.

Obviously, there is a lot to be thankful for to everyone who collaborated and started early care, but please, once a professional team takes charge of the situation, you have to make yourself available and not act on your own or panic. Calm and order are basic.

To the patient, wish him a speedy recovery and much encouragement for the family, with whom we had the opportunity to talk in the hospital once everything was over, and who conveyed their gratitude to all those involved."