The independence movement is right now the closest thing to a trencadís: a mosaic of irregular ceramic pieces, all different and glued together with an abstract design. 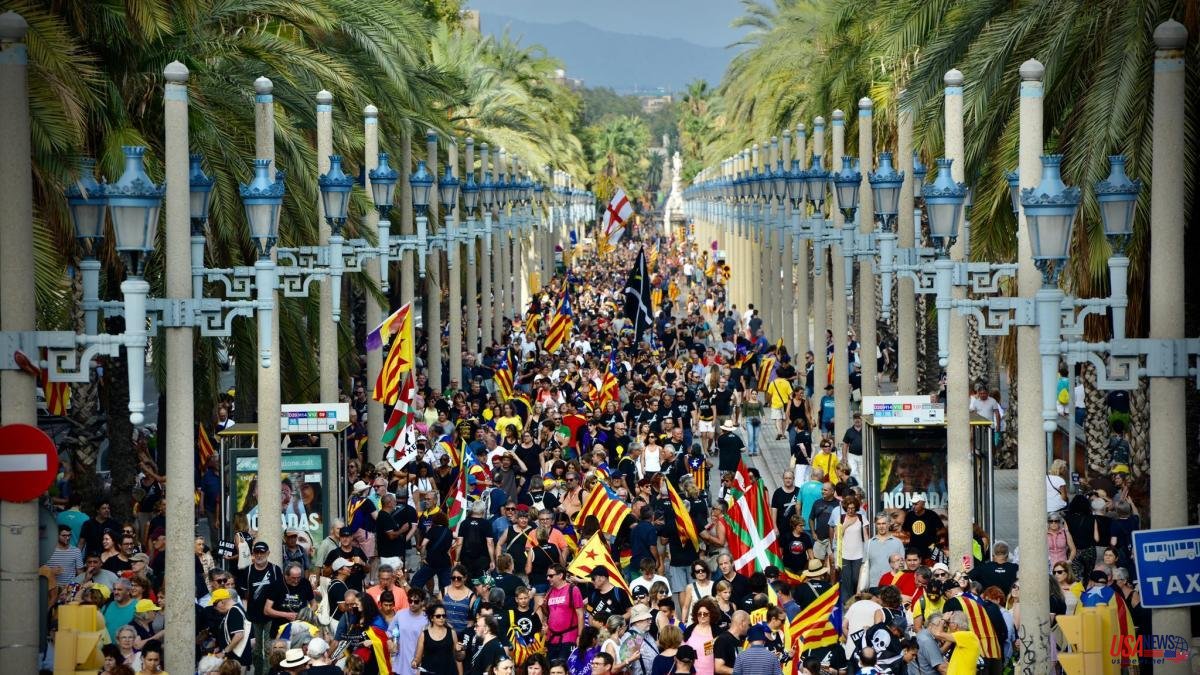 The independence movement is right now the closest thing to a trencadís: a mosaic of irregular ceramic pieces, all different and glued together with an abstract design. For a time, during the cycle from 2012 to 2017, it seemed that this trencadís was as durable as those made by Antoni Gaudí using an ancient technique. But since 2018 the independence movement has been cracking, it has shown the divisions, the tiles have been falling off and they have lost harmony. There is no unit. The trencadís had been worked by Santiago Calatrava.

In the Diada demonstration organized by the Catalan National Assembly (ANC) in Barcelona, ​​the division has once again become evident. Between the street and the parties. There have been more fights and conflicts in fear of the forecasts, than not when the appointed day has arrived and people have taken to the streets. In other words, the practice disobeyed the theory and despite all the previous political context of discord there has been no mess. And if you have to look for an exception, it is not from this Sunday, but from Saturday: a journalist was attacked in the Fossar de les Moreres.

There is disunity in the independence movement, yes. Some paper also fell to the ground in the mobilization this Sunday, but there were neither pushes nor disputes of consideration beyond the shouts of botiflers (traitors) – above all – thrown into the air without the recipients, the politicians, being present. And if they were, as is the case with the representatives of Junts, they have not felt sufficiently offended or alluded to to run away. Dolors Feliu, president of the Assembly, has given voice to the disagreement of the protesters with the Government, ERC, Junts and the CUP: "If you do not achieve independence, call elections", she has said while she warned that she would promote a civic list. A challenge and an ordeal to the independence parties and the full-fledged institutions. “Govern resignation”, shouted the people to put the icing on the cake.

The demonstration, despite everything, has been massive. Much less has it achieved the levels of 2017, when a million people took to the streets. Or the 600,000 in 2019, the last year without a pandemic. But that of 2022, with 150,000 people, has exceeded the 108,000 of last year. All figures always according to estimates of the Guàrdia Urbana. According to the ANC, however, 700,000 protesters gathered; in 2021, 400,000. However, throughout Catalonia there have been a multitude of protest acts and concentrations.

From the most multitudinous demonstration this Sunday, one cry has disappeared: "Unidad". Not once has it been mentioned in the course of the march along Calle Paral·lel, along Paseos Colom and Isabel II and along Calle Marqués de l'Argentera. The term also did not come out of the mouths of Jordi Pesarrodona, vice-president of the ANC, Jordi Gaseni, president of the Association of Municipalities for Independence (AMI), Xavier Antich, leader of Òmnium Cultural, and Dolors Feliu.

Antich has referred to the unit, but with other terms, as if that word were a cliché to avoid, such as ERC's "expand the base" or Junts' "intelligent confrontation", which have provoked so much ridicule. “Allowing our force to become smaller, fights to escalate or mistaken for enemies is not an option. This is not about looking for culprits, but about getting accomplices”, underlined the president of Òmnium in clear contrast to the speech of the ANC. This last sentence has cost him a puff.

What resonated from beginning to end was the cry of “botiflers”. There were "botiflers" everywhere. On the banners where else: “Botifler, I will not vote for you”, “Botiflers, neither here nor in Madrid” (message to ERC), “Botiflers, history will judge you”. But there were chants of a more vindictive nature, such as "Yes, yes, yes, we are still here." Or signs making it clear that “People are here”.

Neither Pere Aragonès nor any member of the Esquerra leadership, except Carme Forcadell, has attended the Assemblea demonstration, as they had already announced. Those gathered responded with songs of "President Puigdemont" and "Puigdemont, our president" at 5:14 p.m., when the march began.

The CUP has sent a single representative, Dolors Sabater, a deputy for the cuperos, but a member of Guanyem Catalunya. The CUP does not seem to have felt comfortable with the approach of the mobilization either and has prioritized, as always, the one organized by the pro-independence anti-capitalist left at 6:30 p.m. A left that has also replied to the president by burning a giant photo of Pere Aragonès with Pedro Sánchez on Paseo Lluís Companys.

ERC has not stood still and has tried to show pride on four occasions. He has loosened up. First, the night before, with a Marta Vilalta challenging those who whistled her, in the Fossar de les Moreres, to shout louder if they were able. Second, when in the floral offering to Rafael Casanova, the ERC delegation, with Oriol Junqueras at the head, has tried to counteract the accusations of "botiflers" - omnipresent this Sunday - with cries of "independence" (Junts has been whistled at, but in smaller extent). Third, singing a cappella another stanza of Els segadors before the statue. Lastly, at the event organized by ERC on Carrer del Bruc, with a five-minute fiery intervention by Junqueras in which he assured that no one "will shut him up".

The next appointment will be the fifth anniversary of 1-O. The Consell per la República is the one who calls the main demonstration. It will be necessary to see if the claim that he makes of the “validity of the results” of 1-O causes as many problems as the “leaving behind the parties” of the ANC call manifesto for the march of this Onze de Setembre.