"The belief is accentuated that the former minister of the Spanish republic, Marcel lí Domingo, died of poisoning. 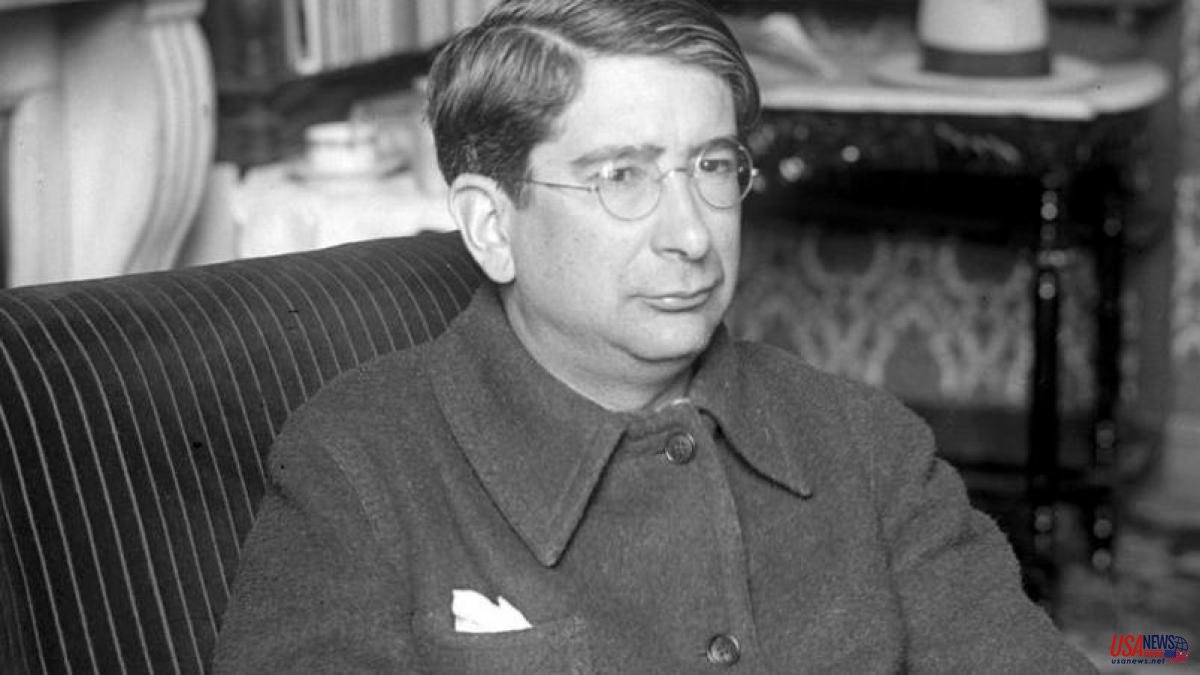 "The belief is accentuated that the former minister of the Spanish republic, Marcel lí Domingo, died of poisoning. The poison used was a narcotic that does not leave the slightest trace." Imperio, a Falangist newspaper, spoke on March 10, 1939 of the Death of the Catalan politician in Toulouse at the beginning of the month On the same day Azul, the organ of the FET and de las JONS, added that "the poison was produced in a laboratory of a Marxist pharmacist."

A week later, Pensamiento Alavés pointed out that it was an "assassination ordered by 'someone' who tried to silence this and other Republican leaders, dissatisfied with Negrín and in possession of evidence that showed strange interventions in the Spanish revolution".

The Francoist newspaper drew Manuel Azaña and Diego Martínez Barrio, presidents of the Republic and Les Corts, frightened by the possibility of being poisoned and added that "Domingo had documents that, it is said, have disappeared from his luggage". For the regime, the irrefutable proof that the environment of the President of the Government of the Republic Juan Negrín, a socialist seen as a pro-communist, wanted to put an end to Catalan was an article written two days before he died and that La Dépêche de Tolosa had published posthumously.

Referring to the revolutionaries of July 1936, Domingo expressed that one day we would have to find who inspired them. The Franco regime had it clear: the Soviet Union. And he implied that the language of the article “is not the usual demagogic tone of those he used to write, why? He knew many things. Maybe too many things."

As his biographer, Xavier Pujadas, points out, in Marcel·lí Domingo y el marcelinismo (1996) the one who had been Minister of Public Instruction and Agriculture during the Second Republic disapproved of the pro-communist image of the Republican side during the civil war. The politician of the Republican Left Party, the Catalan denomination of the Republican Left of Azaña, lived since the summer of 1938 between Paris and Barcelona because he was looking for a mediation that would end the dispute and because of his distance with the policy of extreme resistance of Negrin.

On the morning of February 25, 1939, Domingo left Paris in the direction of Perpignan to meet with relatives and republicans interned in the concentration camps of French midday. At almost one in the afternoon he arrived in Limoges, 400 kilometers to the south. The politician -according to the family version that his nephew Joan Benet Domingo explained in 1988 to Pujadas- would have entered the station restaurant, where he argued with some strangers who wanted to rob him while he was drinking coffee.

La Vanguardia has located in the French National Archives the report that the divisional commissioner of the Tolosa secret police of the Sûreté Nationale made to the prefect of Haute-Garonne on March 2, 1939, the day of the politician's death. According to this, Domingo stopped in Limoges to eat and "had the impression of having been bothered by a meat dish that was served to him at the [restaurant of the] Hotel" of the station.

That day, the politician wrote down in his personal diary, which is preserved in the Regional Historical Archive of the Lands of the Ebro, “my left side hurts enormously, I think it is my spleen”. The next day, Sunday, he got up reluctantly. "I don't feel well. I have no appetite and I feel out of temper. The pain in the spleen continues. It is bad". He called his wife, Filomena Savé, in Paris and continued the journey by train.

He was separated by 500 kilometers from Perpignan, but when he had done almost 300, he got off at Tolosa. It was five in the afternoon on February 26. The man from Tarragona no longer wrote in the diary. The police report corroborated that he stayed at the Compagnie du Midi hotel "after noticing that his condition was getting worse." According to the report, on the advice of Francisco Azorin, former Spanish consul in Tolosa, he asked Dr. Colombiés to visit him. He diagnosed "mild intoxication."

According to Filomena Savé's diary, also in the Ebrense Archive, Domingo called her on Monday the 27th to come. She had a fever of forty. The wife arrived at her side at five o'clock on Tuesday morning. Savé notified the doctor, who told her that “she has nothing”.

As Marcel·lí did not improve, on March 1 Savé requested it again at seven in the morning. Colombiés repeated "that he has nothing, that it is a slight intoxication that will last eight to ten hours." But let him not move it. In the afternoon, the deputies of the Republican Left Mariano Joven and the ERC, Ramon Nogués, a former collaborator of Domingo, and the member of his party, Adolf Cabús, arrived. Then Marcel·lí had a syncope and the doctor injected serum and camphorated oil for the pain.

His assistant, Julià Fresneda, gave him a new injection at nine o'clock at night and performed an intestinal lavage. Domingo got up to go to the bathroom. "I don't know what I have, Filomia, I feel very bad." At eleven o'clock he had a little dyspnea. According to the police report, Nogués and Joven spent the night next to Domingo, who "got worse." At five in the morning on Thursday, March 2, he himself called the doctor, without success. At seven, Save insisted.

When Filomena entered the room in the morning, "I see that Marcelino has half of his left hand bruised." Despite claiming it, according to the police, "Dr. Colombiés did not answer the phone calls." Without any cry, according to Savé, “without a gesture or any convulsion”, the man from Tarragona died at the age of 54. When the doctor came, he could only certify the death at eleven o'clock.

And so, Filomena searched for an explanation. “I have been poisoned. I'm sure. They have killed me. Where? Who? How? I do not know". Looking back, looking for the right moment, Savé and the politician's intimate circle placed the alleged poisoning in the episode that Domingo had told them about in the Limoges restaurant. They wanted to see in that discussion a distraction to do it.

The writer Josep M. Poblet in La catalanidad de Marcel·lí Domingo (1978) explained that “people, friends and relatives have spoken of poisoning”. Miquel Bertran in the thesis The pedagogical dimension of M. Domingo (1979) collected the testimony of Pere Domingo, brother of the deceased, according to which the doctor who had attended him in the last moments assured that he had been poisoned with arsenic thrown in the coffee . Fact that, as has been seen, is implausible.

According to his nephew Joan Benet, in Tolosa "the marimorena was armed, some said that if they had poisoned him, others that if not". The wife's search for an explanation for a death that had to be given meaning and the interest of the Franco regime, at the other extreme, met. The regime, aware of the disagreements between Domingo and Negrín, took the opportunity to charge against communism and sow discord to the incipient republican exile.

The also nephew Federico Domingo expressed in 1984 that he had understood "although I speak for references, that my uncle Marcelino was poisoned by the communists" because he wanted to publish a book about the control of the Negrín government by them. "I heard it on one of my trips to his [widow's] house."

The report located by this newspaper, written in Tolosa on the afternoon of the death, does not give rise to speculation. “Dr. Goutenegre, a doctor from the Hygiene office, delivered this day at 3:30 p.m. the certificate for burial purposes. Mr. Domingo's death is due to cardiac collapse during a serious intestinal infection that has lasted only a few days.

“Making a reliable clinical diagnosis of events from more than eighty years ago is mere conjecture,” Dr. Emilio Salgado, head of the Clinical Toxicology Unit in the emergency area of ​​the Hospital Clínic de Barcelona, ​​assures La Vanguardia. “ Domingo began a picture of pain on the left side, with anorexia and dysthermic sensation. Abdominal pain and anorexia persisted for the next 72 hours, along with high fever. However, there is no evidence of vomiting, diarrhea, cough or other symptoms, ”he analyzes.

“On the day before he died, we only know that he fainted and had general malaise and that at night he had difficulty breathing. On the morning of death, the purple hand is a sign of poor peripheral perfusion”, says Salgado. "Very likely the cause of death was an abdominal infection - complicated acute diverticulitis - which caused septic shock and secondary multi-organ failure."

The toxicologist adds that "arsenic poisoning is not likely because acute intoxication after oral consumption of a lethal dose is characteristically manifested by the appearance of vomiting and abundant watery diarrhea, followed by severe hypotension and multiple organ failure" . A picture that in the nineteenth century could be confused with the symptoms of cholera. "So, I agree with Dr. Goutenegre's opinion," concludes the doctor.