The day the banking panic spread in Catalonia

On Monday, October 2, 2017, the banking panic took hold in Catalonia and also in much of Spain. 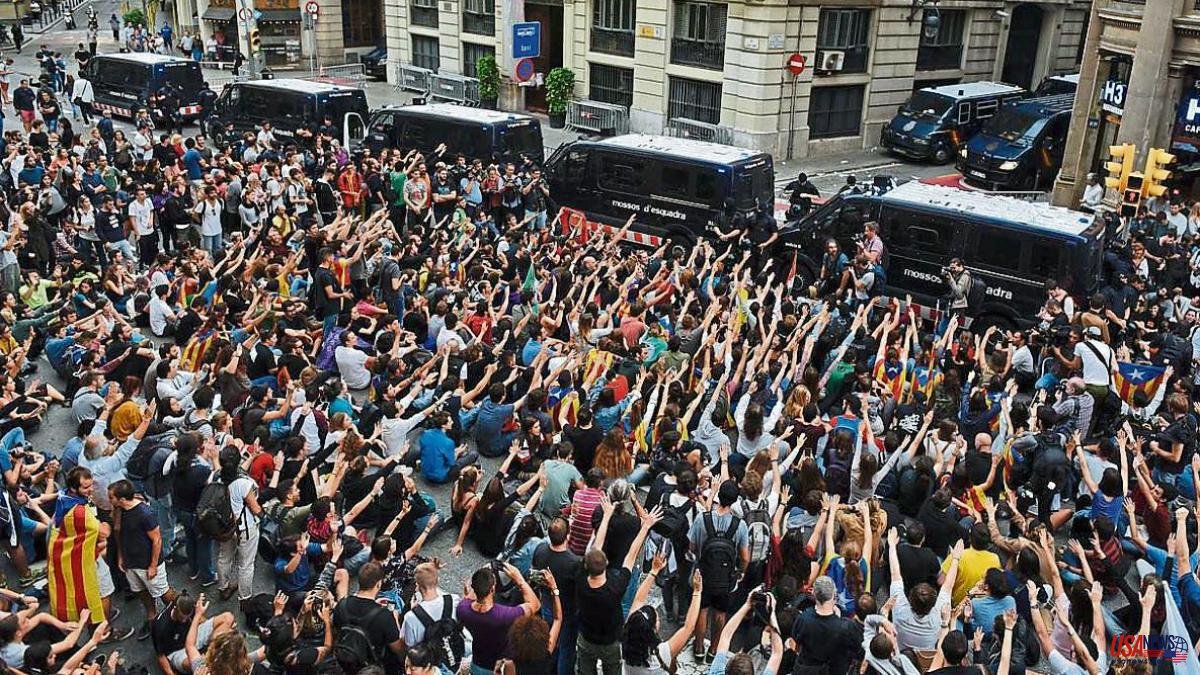 On Monday, October 2, 2017, the banking panic took hold in Catalonia and also in much of Spain. On the morning of that day, a movement began that, in just three days, would take hundreds of thousands of savers to bank offices and computer applications, especially those of CaixaBank and Sabadell, to put their savings in a safe place, which they considered in danger. (...)

The day before, on Sunday, October 1, the society was stunned before the television screens. The images showed how 2.3 million people went to vote in the improvised Catalan polling stations, despite the excessive police repression, in a referendum that the Government of Mariano Rajoy had declared illegal and had assured that it was not going to be held. The magnitude of what happened overwhelmed the political protagonists, both in the Government of Madrid and in the pro-independence front, as well as society as a whole, which that day became aware of the magnitude of the political crisis. The unimaginable had happened; anything could happen. The possibility that there would be a unilateral declaration of independence, that Catalonia would be left out of political Europe and the euro, thus dragging down the community's banks and forcing a corralito that would block their savings, became a nightmare for many citizens.

Money is scary, says a fairly realistic cliché. Banking, much more. In the words of one of the highest officials of one of the two Catalan entities that changed headquarters in those days, “the unilateral declaration of independence was equivalent to a revolution. And from a revolution, money flees like the plague.” During those days, this climate unleashed economic panic among sectors of the bourgeoisie and very broad middle classes in Catalonia, including some of the most pro-independence sectors. (...)

From that moment on, both banking entities created their respective crisis committees. A group of executives meeting almost 24 hours a day, while the episode lasted, monitoring deposit withdrawals and studying preventive actions in the event that things got complicated and their liquidity was in danger. The two entities calculated their ability to resist and how long they could last if things stayed the same or worsened. They also studied future movements, in case the available resources on the balance sheet were not sufficient. (...)

The most influential man in the Catalan economy, Isidre Fainé, launched the first messages of maximum concern. For weeks, seeing the evolution of the events and sensing the consequences of the laws approved in Parliament, he had maintained contacts with the highest levels of the State, from the King to the Vice President Soraya Sáenz de Santamaría and the Minister of Economy, Luis de sour cherries From those conversations, he had drawn the clear conclusion that Madrid was not going to make concessions or new political proposals. (...)

That day the financier met with the Vice President of the Government and Minister of Economy, the Republican Oriol Junqueras. The meeting took place at the headquarters of the banking foundation, in the smaller black tower of the two that the group occupies on Barcelona's Diagonal. The banker asked the politician about the next steps that President Puigdemont planned to take, to which the questioned responded by clarifying that at the beginning of the following week the unilateral declaration of independence would be approved, as planned from the beginning in the independence roadmap. Fainé told him that this perspective forced him to immediately organize the march of La Caixa de Catalunya. "A month in this state of banking panic and we will have a situation like that of Popular," he said in reference to the massive withdrawal of funds that dragged the historic Madrid bank to intervention by the ECB and its auction for one euro. "And my obligation is to save the bank," he concluded. (...)

That Wednesday afternoon, Oliu and Guardiola already had several conversations in which they concluded that they should convene the council for the following day, in order to approve the change of headquarters to Alicante. (...)

Were there withdrawals of public money, from the State or from related organizations, coordinated to force the movements of those two banks that led to their change of headquarters? Were those that occurred significant?

La Caixa has always denied having suffered this type of withdrawal and the sources consulted for the preparation of this work have ratified that position. Even Jordi Gual, the then president, said it emphatically in Parliament: “I have been asked if there had been any leading role of public sector companies. The answer is decisive: no. They were outflows from private depositors, from small private depositors. Therefore, I say this clearly and in Catalan”.

The same can be said in the case of Sabadell. The Oliu bank did register the significant exit of a company owned by the State and of some autonomous public bodies. The most relevant, that of the Enaire holding company, owner of Aena, the manager of Spanish airports, which withdrew 400 million. (...) They also withdrew the Center for Industrial Technological Development (CDTI) dependent on the Ministry of Industry and the National Commission for Markets and Competition (CNMC), an autonomous body, both movements of lesser magnitude.

In the private sphere, companies such as Inditex, Acciona or Ferrovial withdrew money from the Vallesan bank. In these cases, Guardiola was in charge of calling the top executives of the companies to give them explanations, convey peace of mind and ask for the return of the funds. Florentino Pérez, the president of the ACS construction company, was on the list of those questioned and after talking with the banking executive, the merengue president, arrogant, promised to return the money ... in duplicate, which he actually did. Taking stock, Oliu pointed out: “I have also been asked if the public sectors exerted pressure. I also have to tell you that during this month of October the funds from the public sector increased 1,000 million” (...)

On the same morning that the transfer was approved, Oliu previously went to meet with Oriol Junqueras, Minister of Economy, Vice President of the Government, at the headquarters of the department (...). The conversation was direct, dry and hard. Oliu informed Junqueras (...) Junqueras replied very harshly that Sabadell could not do that to Catalonia and warned him that his surname would be dragged across the country.

Back at the bank, the council held their momentous meeting that very morning, in a serious and tense atmosphere, but it didn't take long. (...) After the ratification of the proposal, Oliu set out for the Palau de la Generalitat to report the decision, this time to the president. Puigdemont took the blow much calmer than his vice president, even with resignation. He was already informed by Junqueras and it did not come to him again. The conversation between the two was long, around an hour and a half, and during part of it Oliu repeated the arguments that he had already made in Economy, “I am doing it to save the bank”. (...)

With the intention of cushioning the blow and the social reaction, Guardiola contacted the main civilian leaders of the independence movement, Jordi Cuixart, president of Òmnium Cultural, and Jordi Sànchez, president of the ANC. (...) Cuixart reacted jokingly when he received Guardiola's explanations, with references to the fact that, after all, the bank would remain in the "Països Catalans" area, by moving to Alicante, and asked him that in the announcement it was made clear that the measure was "reversible", something that did not end up included in the public statement reporting the change. But Sànchez was more critical and warned the banker that the transfer was doing a lot of damage to the country.

In La Caixa, the approval of the transfer did not arrive until the following day, since it required a second legal modification, urgently formalized by the Rajoy Government (...) Finally, on Friday the 6th, the council chaired by Jordi Gual adopted by unanimity identical decision (...) Despite the unanimous vote, there was debate in the council, since Antonio Sáinz de Vicuña proposed that the transfer go to Madrid, an option that was also rejected.