The climate crisis reduces the harvests in the field

In the early hours of April 2, the farmers of Lleida spent the night in suspense. 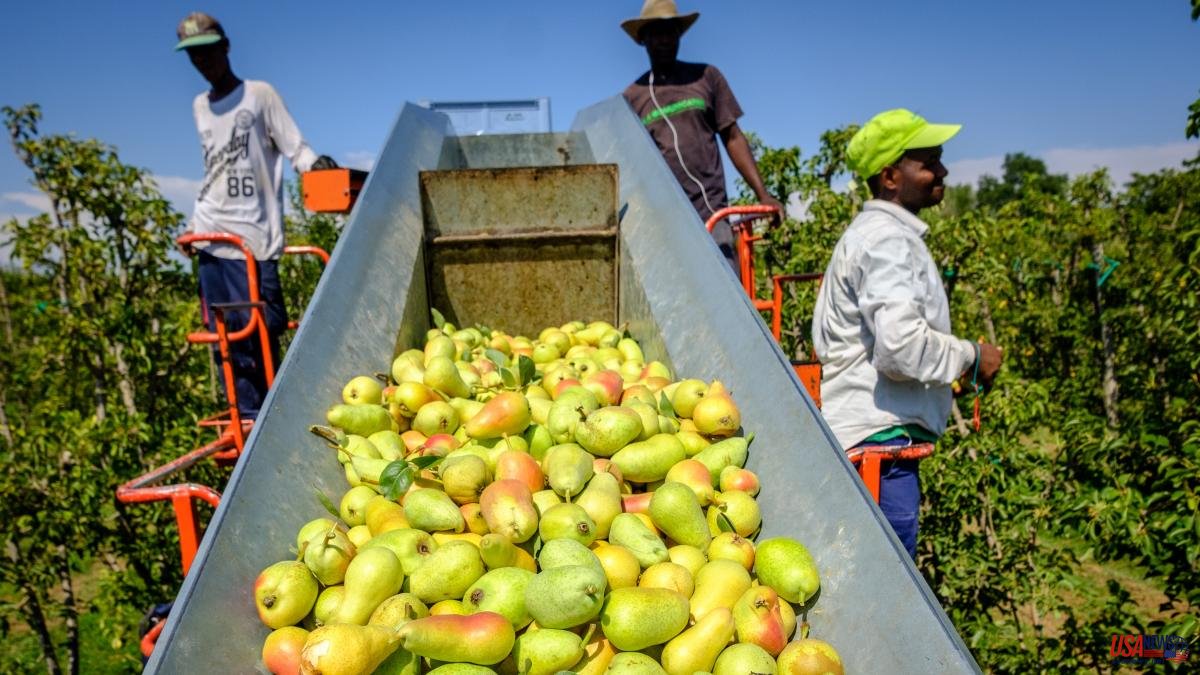 In the early hours of April 2, the farmers of Lleida spent the night in suspense. Every hour that passed, the thermometer dropped a little more: two below zero, three, four, five... it even dropped to six. The field suffered the worst frost in the last 40 years. For three consecutive nights, the farmers were watering and watering, heating the trees with burning paraffin canisters. However, the efforts were of little use. Most of the peach and nectarine harvest was lost, and with it, the income and jobs of thousands of people. Stone fruit is today the most representative variety of the Catalan countryside, followed by apples and pears, which better resisted the extreme cold of April.

But this has not been the only traumatic episode for the sweet fruit sector. The climate crisis has also brought a hotter May than usual and a summer marked by low rainfall and severe heat stroke. This has forced the harvest to be brought forward and the product has come out smaller than usual and with some flaws.

Farmers have been shouting to heaven for weeks. “This is the worst year we can remember. The collection of stone fruit in Catalonia will fall by 70%. If the usual thing is to obtain around 550,000 tons, this year we will only reach 165,000", laments Manel Simón, general director of the Afrucat employers' association, who adds that the impact on apples and pears will be less, 25%. According to the Unió de Pagesos union, the frost will cause losses of 450 million euros in the sweet fruit sector.

And not only fruit businessmen are concerned. Cereal farmers in Catalonia have also seen harvests fall by 32% compared to last season. According to data from the Agrarian Association of Young Farmers (Asaja), 890,014 tons have been collected, compared to 1.3 million in 2021, mainly from the varieties of barley, wheat and oats. "The harvest has been very sudden, it has had to be advanced two weeks due to the drought and the heat waves," President Rosa Pruna lamented this week. According to estimates by Unió de Pagesos, the losses caused by the extreme weather are going to be 180 million euros.

Concern about global warming is spreading across the continent. In fact, in mid-July, the European Commission warned in a report that water stress would reduce crop yields in several countries. The greatest risks, according to the EU, are faced by Spain, France, Portugal, Italy and Romania, although Germany, Poland, Hungary, Slovenia and Croatia are not spared either.

All kinds of varieties are affected by climate change. This last week, the focus was on recent cereal harvests. In Germany, the lack of rain will force a 15% reduction in production while in France, which has experienced the driest month of July in its recent history, some types of cereal are facing double-digit falls while others are going to grow slightly . In Spain, the average decrease in the grain harvest will be 23% compared to 2021. "For 8 years, each campaign advances the harvest a couple of weeks and that causes drops in production and losses in the product," he expresses with concern José Roales, cereal farmer in Zamora and representative of the state union COAG.

As for the fruit, the falls at a global level will not be as severe as in Catalonia. In Spain, stone varieties will decrease by 32% while in Europe, they will rise by 9% per year (although compared to the average of the last 4 years, a decrease of 20% will be recorded). On the other hand, pip fruit (apple and pear) will evolve upwards in Spain and also in Europe as a whole, thanks to the pull of the apple in Poland, according to forecasts by the Ministry of Agriculture.

Despite the devastating effects of global warming, farmers do not fear for their immediate future. In most cases, they have their backs covered by having taken out insurance that responds to adverse weather conditions. "In Catalonia, 85% of sweet fruit farmers are protected and for this reason, they will be able to recover the investments they have allocated to this harvest," says Manel Simón, from Afrucat.

Agricultural insurance is a lifesaver, but in any case, farmers face the future with concern. The sector is no stranger to hyperinflation and, like everyone else, has had to endure increases in the price of fuel, plant protection products, packaging and transport services, among others. "In recent years costs have increased by an average of 35%," says Simón.

It is also true that sales prices have risen (see chart). Especially, those of cereal have skyrocketed, due to the rise in demand in China (which has recovered pig production) and also the war in Ukraine, a large European producer of cereal, which for months has had the ports blocked. “In this sector, margins are currently 10-15%. It is true that in recent months there has been a speculative bubble due to the war, but now prices are starting to normalize because the ships in Ukraine have already set sail”, says Josep Carles Vicente, spokesman for Unió de Pagesos.

It is still too early to forecast cereal profits this year. In any case, Vicente predicts that the situation will not be serious. On the other hand, the fruit sector could face very fair or even negative returns. “In their case, the sales prices have also risen, but the increase in costs due to inflation and the significant loss of production will leave the profits for the year practically nothing. Luckily for insurance," says Vicente, who recalls that the stone fruit sector had obtained good harvests in previous years.

Given the losses caused by the frosts, the fruit sector is also claiming state aid. “We are in talks with the administrations and we hope to receive the approval of the European Union. We hoped to obtain it since last year, France experienced a very similar episode and obtained the same type of aid that we asked for, ”says Simón. In addition, the agricultural sector works to obtain lines of credit at the state and regional level that help to face the new costs. European aid from the CAP is insufficient for them.

Sources from the Ministry of Agriculture point out that for the moment, they have approved tax reductions to deal with the drought and have also increased the line of aid for contracting agricultural insurance by 60 million euros. In total, they will amount to 318 million euros this year.

However, Francesc Reguant, director of the Observatori d'Economia Agroalimentaria del Col legi d'Economistes, explains that the countryside must face the climate emergency with a broader vision and not with short-term solutions. “This year, Catalonia has experienced the most severe climatic aggression in its history and that should set off alarms. The climatic conditions will be more and more extreme and, if nothing changes, the production and the yields will be gradually lower. The situation requires much more than reinforcing public aid. It would be interesting if the industry introduced genetically more resistant varieties or even modified the location of crops towards cooler areas. We cannot stand with our hands in our pockets.