The Bayern punishes the lack of aim of the Barça

There is no way. 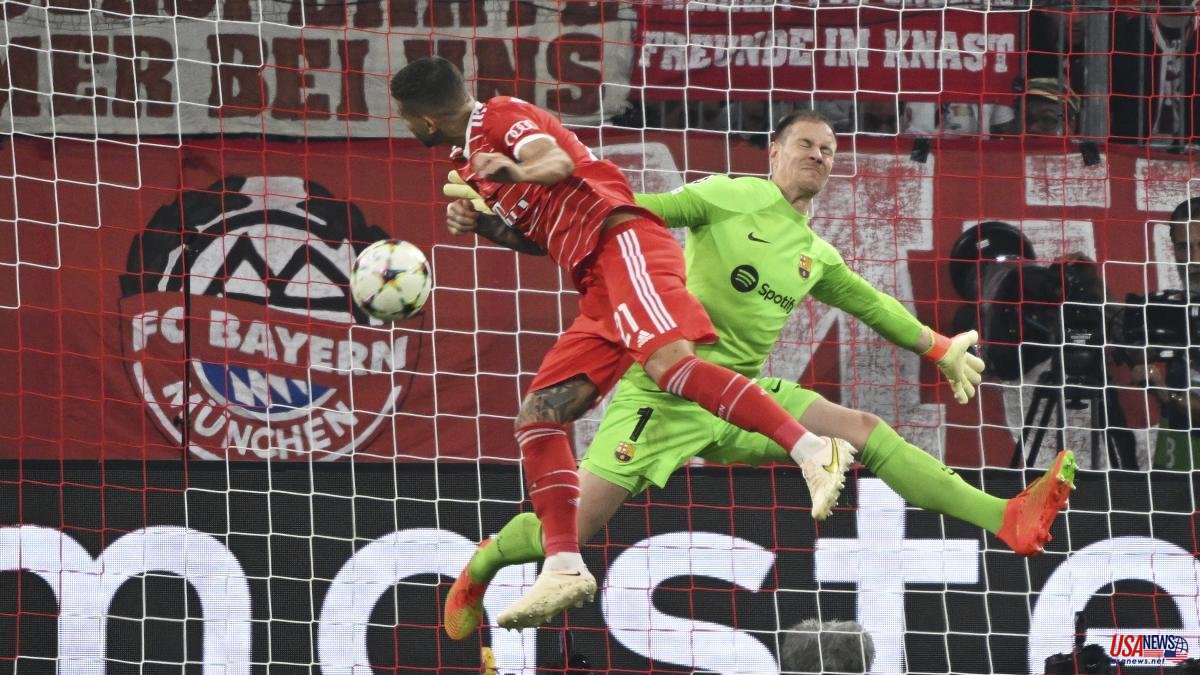 There is no way. Munich is still cursed for Barça. It was not like other times but the defeat came the same. Inexorably. Apparently unfair in the first half but in the Champions League you can't forgive when you have the moment and you can't disconnect even four minutes when you receive a first blow. Because then the second comes and everything becomes almost impossible. The Blaugrana image was remarkable but without a goal until the break and fragile afterwards. Lewandowski did not score, whose aim failed him the day he returned to his old house, and instead Lucas Hernández and Sané hit in just a breath. The Blaugrana project offered signs of hope but also that it is still tender. His sights failed him and he lost his solidity after the break. It's September and Barça has changed half the team but this dizzying Champions League doesn't wait and the group is up for grabs. At least now Xavi's team has elements on which to build and grow. The Champions does not deserve. Many times you simply win with the packaging of teams like Bayern, even if they are not at their best.

In the decision making Xavi surprised by choosing Marcos Alonso to make his debut as a starter at left back and opted for Christensen to the detriment of Eric Garcia. The Blaugrana defense became a tall line with three footballers who are close to 1.90 and the powerful Koundé guarding the right flank. The Barcelona coach wanted his footballers to fight in the melee and from above, but the aerial game failed in the first goal.

Meanwhile, Lewandowski was received with majority applause from his former fans and the footballer, who did not have an inspired day, also reciprocated by clapping his hands towards the respectable. Without banners about the return of the attacker but with one that read, in Spanish, The Black Beast in reference to the precedents between both teams. It is still valid.

Another Barça was on the field, with five signings, only five players from the Munich debacle in December and only two survivors of the shameful 2-8 (Ter Stegen and Busquets). Other wickers on the mat in search of another result. He didn't find it but he wasn't embarrassed this time.

The Blaugrana transformation took very little time to manifest itself. After some initial hesitation, Xavi's team settled in the opposite field with conviction and fierceness. The divided balls were from Gavi, who swept everything. The oriented controls and the course in the ball exit bore the stamp of Pedri, who only lacked the most important thing, the goal. The cuts were starred by Marcos Alonso who started like a shot. The chances were, above all, Lewandowski. Although the first one was enjoyed by Pedri. After a recovery of the Pole Raphinha combined with Gavi and this with Pedri, who cut and shot. Neuer emerged. Meridian opportunity. Like another in which Lewandowski, after driving Dembélé and assisting Gavi, sent up with everything in his favor. Those options don't usually fail on the 9th, to which Upamecano read the movements, and Xavi raised his hands to his head, in a repeated gesture when Neuer blocked another header from Lewandowski or when Raphinha grazed the post with a low shot.

The Allianz Arena was silent. Barcelona not only competed but was superior. Bayern barely arrived and Ter Stegen lived surprisingly calm. Before half an hour, Barça added nine shots. Only two questions were missing. The first, the marker. The second, a denied Dembélé. Xavi moved him from the left to the right to see if he improved. He kept it on the field for 80 minutes with blind faith.

Movement of pieces within a brave Barcelona. The coach's bets were working but the Blaugrana team left after intermission frustrated for not winning. Also angry because neither the referee nor the VAR warned of a penalty in a shot down by Davies to Dembélé. In the stadium the action seemed very clear: penalty.

Barça had done almost everything well but had forgiven and paid for it emphatically. Because the world came crashing down on him after the break. Even Raphinha was able to advance to Barcelona but then there was a fade to black. A corner taken by Kimmich overcame the defenders from above and Lucas Hernández advanced to a lukewarm Ter Stegen, who had just deflected a very hard shot from Goretka. The German medium had just come out. Then came the second with Sané taking advantage of a gap in the center of defence. The nightmare was here again and Xavi reacted with the changes. He incomprehensibly removed Gavi and left a horrible Dembélé on the field. De Jong and Ferran Torres entered.

The bleeding had to be stopped and Pedri was able to do a tourniquet but finished off the post in the middle of a barren offensive. There was no way. And there wasn't.