The armed America and the one that cries

Someone approaches Lizzeth Cortez, speaks to her, and instantly emotion clouds her gaze. 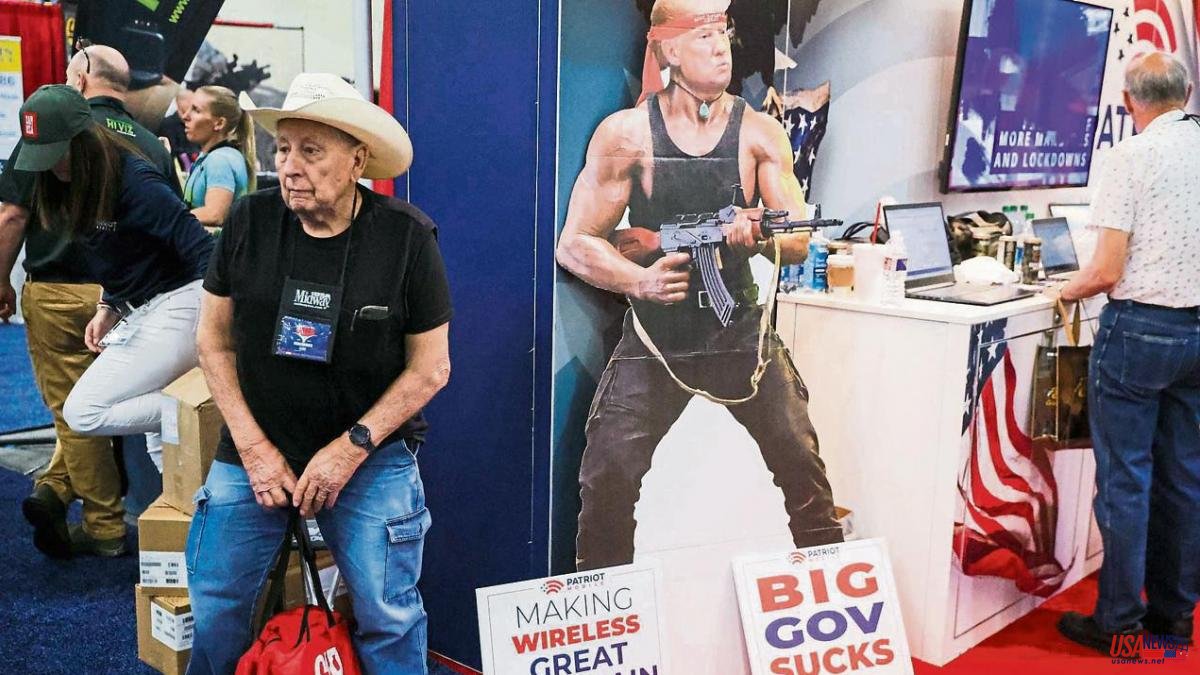 Someone approaches Lizzeth Cortez, speaks to her, and instantly emotion clouds her gaze.

"My nephew, José Flores, is one of the dead at school," he confesses at the reception of a hotel in Uvalde (Texas). “We identified him by clothing and fingerprints. His father was asked to take a DNA test, ”he clarifies. Better not specify the reason why that ten-year-old boy was unrecognizable.

A day later, in Houston, one of the big Texan cities, the weekend of the annual convention of the National Rifle Association (NRA), an organization that guards the sacrament of bullets, begins. Al Evans has arrived from Fort Lauderdale (Florida) to attend a party that is celebrated as if nothing had happened, as if there were not 21 coffins awaiting burial.

“What happened is tragic –he points out–, but it has nothing to do with the weapons, which are not the problem. They are not violent, they are inanimate objects. The violent ones are the ones who use them. People are bad and always will be. Mental health is the real issue.”

Tears are shed in Uvalde over the armed epidemic in the United States. In Houston, guns are glorified as a pagan god that cannot be lived without, despite the contrary effect of their use. The Wild West is not just a movie myth.

"Guns save lives," emphasizes Evans, who is in favor of well-trained teachers being armed, rather than limiting access to a military-style rifle to an 18-year-old teenager like Salvador Ramos, who acquired an AR- 15 legally and caused the massacre at Robb Elementary School. "If I had been in that school, I would have killed that guy in two seconds and those children would be at his house today," he guarantees.

His security and speed of action contrasts with the mea culpa of the Uvalde police for the delay, more than an hour, in deciding to enter classroom 112 to hunt down the gunman. "It was a wrong decision," the boss, Steven McCraw, acknowledged Friday. They misread the scene. They believed that it was a hostage situation and that the students were not in danger – “we did not know that there were deaths – although a girl, among the lifeless bodies of her friends, called the phone: “Please send the police.”

According to Dan Patrick, lieutenant governor of Texas, "the police operation cost lives."

Once the weapons have been cleared, there are already two culprits: a deranged mind and the uniformed men.

Uvalde and Houston, so close and so far, express the gap that exists in this society. They are the two sides of the country where more people die from gunshots than anywhere else. It is also true that it depends how you look at it. The data proves it and then there are the alternative facts.

“How many die in England from stabbings? The media don't look at that statistic,” complains Michael D. at the door of the convention and arms fair. “The knives are not allowed – he adds – and people continue to stab themselves. The amount is irrelevant, the important thing is who does what”.

This is the chronicle of a journey that goes from mourning for the slaughter of 19 children and two teachers to the consecration of tools typical of war and not of coexistence. Maybe the US is at war. With himself.

Lizzeth Cortez, 46, is the manager of a hotel in Uvalde. She cries for her nephew, José, and for her eight-year-old granddaughter, who since Tuesday, when "the unimaginable happened in this little town," every morning she expresses her fear and tells him that she doesn't want to leave the house.

This woman exposes one of the peculiarities of this small town in rural Texas with about 16,000 residents, predominantly Hispanic (just look at the surnames), that attract the attention of visitors: men and women are fathers and mothers at an age young and have large families.

Cortez married at 18, has four children and ten grandchildren.

“We thought this was happening elsewhere, in big cities. This town has always been very united, ”she emphasizes. Until Salvador Ramos – “a very strange boy, he never spoke” – has put them on the atlas of infamy.

“I moved to Odessa (another Texan city) for a while and said I was from San Antonio because nobody knew this place. And now we have reporters from half the world, Governor Greg Abbott, who did not know what this was, has come twice and President Biden visits us on Sunday, ”she relates in amazement. Although actor Matthew McConaughey has been mentioned as Uvalde's son, Cortez does not cite him.

His references are others, the boxer Óscar Shotgun Albarado (he died in 2021) and Los Palominos, a Tejano music band "born and raised in Uvalde", which has the celebration of the Palomino Festival every September.

Being 60 miles from the Mexican border makes border patrol cars ubiquitous. It was precisely the special forces of this body that "neutralized" the gunman.

"I went to school with the mother of that teenager and she was a good person, she liked to dance and worked as a waitress in a Mexican restaurant," recalls Adriana Reyes, who made some surprising statements on Friday. “I don't know what I thought. He had his reasons for doing what he did, don't judge my son. I just want those innocent people to forgive me,” she remarked.

“I don't understand how that boy could get hold of that war weapon, who sold it to him? Do they want us to arm ourselves now to defend our families? Cortez wonders. "Yes". This is the response from those attending the NRA meeting in Houston.

Why can't we protect ourselves, protect our families?” asks Al Evans of Fort Lauderdale, who is a shooting coach.

It annoys him that they call him a “child killer”, as they are shouting at the anti-gun demonstration across the street. "I have 500 weapons and none of them have ever killed anyone," she insists.

In the city center there are many policemen. It is shocking that uniformed men on horseback are facing protesters as if banner poles (“212 mass shootings in 2022, how many more NRAs?”) are deadlier than guns.

Evans's solution to the school shootings is generally echoed by all conference attendees who agree to speak (many refuse). “If we can spend 40 billion in Ukraine, reinforcing our schools with stronger buildings is a simple solution.”

It is the same argument that Donald Trump makes in his speech after a while, who opposes helping Russia's enemy. The former president not only advocates arming teachers, but also makes an approach of almost militarizing schools.

Among opponents of the NRA, Todd Brannon, a veteran and employee of a technology company, calls it shameful that the convention is being held three days after the last massacre. He also regrets that since the ban on the sale of assault weapons expired in 2004, the country has been flooded with rifles and the massacres have multiplied.

"The fact that shooting drills are carried out in schools means that the country is in a bad way and we must begin to recognize that this is sick."