Little Rock, Memphis and Nashville could see 6 inches of snow. 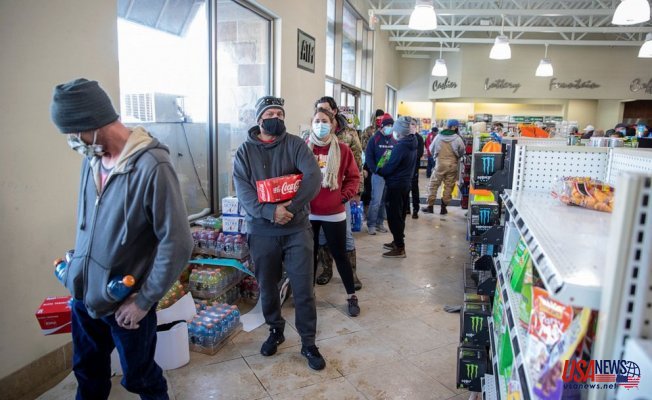 The South, still digging out from ice and snow which brought the area to a standstill this week, is getting slammed with a second winter storm on Wednesday.

Freezing rain is falling in Austin and San Antonio where everything is coated in a layer of ice.

Later in the afternoon, the snow and ice will go into Louisiana, Mississippi, northern Alabama, Tennessee and Kentucky.

Wednesday evening, severe thunderstorms could produce damaging winds and tornadoes along the Gulf Coast from New Orleans to Mobile, Alabama.

The winter has left 2.9 million in Texas without electricity on Wednesday.

Officials in Houston and the surrounding Harris County are advising residents to boil their water.

At least 22 states have delayed or canceled some vaccinations due to weather.

In Texas alone, at least 30 federally-supported vaccine sites were shuttered, according to FEMA.

President Joe Biden had a telephone call with several governors of the states affected by the weather, such as Texas Gov. Greg Abbott and Louisiana Gov. John Bel Edwards, '' the White House said Tuesday evening.

Thursday morning, the storm moves into the East Coast.

Heavy snow Will Start at Washington, D.C., Philadelphia and New York City Thursday morning and continue into the afternoon.

An icy mix with freezing rain and sleet is expected from Richmond, Virginia, to Raleigh, North Carolina.

Philadelphia and New York could see 5 to 7 inches of snow. D.C. and Boston are predicted to get 3 to 6 inches.