The clouds are gathering over the stressed global logistics chains. 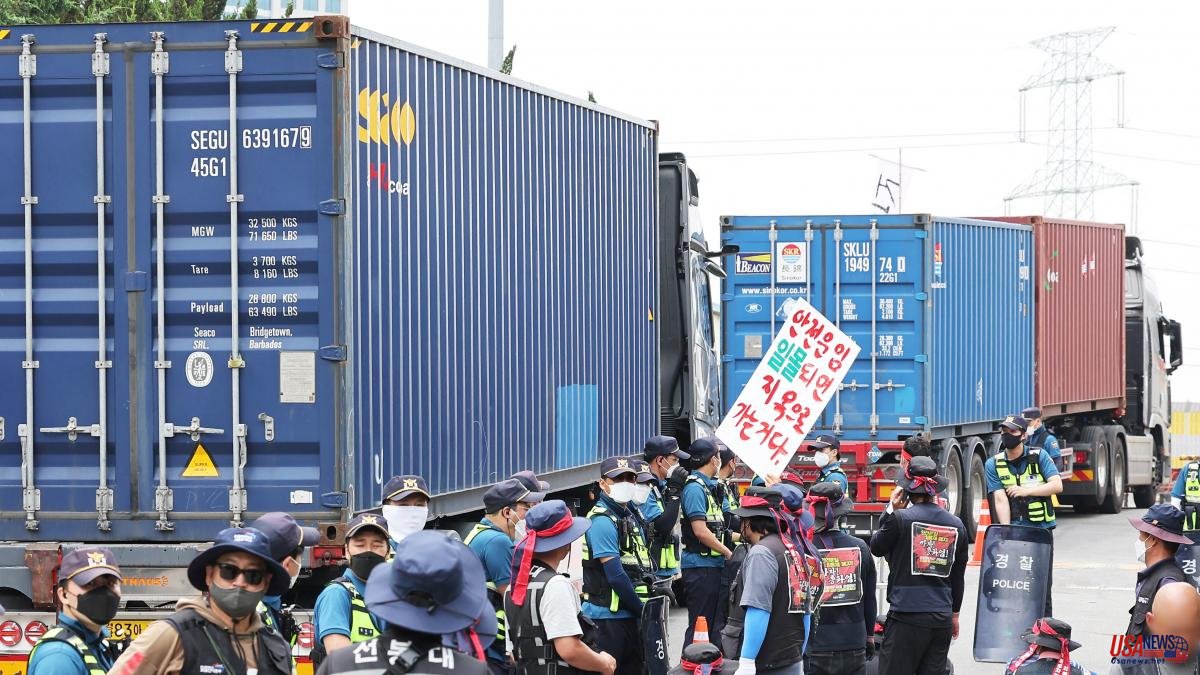 The clouds are gathering over the stressed global logistics chains. To the effects of the coronavirus and the war in Ukraine, an indefinite strike of carriers in South Korea, the fourth largest economy in Asia, has now been added. Started a week ago to ask for wage improvements and aid in the face of rising fuel prices, the strike is already affecting the production of some key sectors and the transport of containers in national ports.

For now, among the most affected sectors are the automobile, steel, cement or petrochemicals, which in this week of strike already add losses for an estimated value of about 1,200 million dollars, according to data released this Monday by the Ministry of Industry. If the strike continues this week, the impact will be much more severe because many other companies are reaching storage limits for their products, they added.

The country's leading metallurgical company and one of the world's largest, Posco, has been forced to stop production at some plants due to a lack of space to store unshipped products. “We are not sure yet how long this suspension will last,” said one of her spokespersons.

Other companies such as Hyundai Motor have also cut production on some assembly lines, where they are already suffering from component shortages due to lack of transportation, while petrochemicals' daily shipments fell by 90%, with truckers demonstrating in front of major complexes. located in Ulsan, Yeosu or Daesan.

The problems they are going through were reflected today on the Seoul stock market, where Hyundai values ​​fell 5.2% -the biggest drop since February 2021-, Posco lost 3.9% or LG Chem fell 3.6 %.

Meanwhile, the port of Busan, the largest in the country and the sixth in the world, the number of containers that entered and left the weekend was reduced by up to 75% compared to the same days of the previous month. That of Incheon, the second largest South Korean commercial anchorage, the fall was more moderate and remained at 20%, according to data from the state agency Yonhap.

For now, there is no news of major disruptions in semiconductor production at key companies like Samsung Electronics, SK Hynix or others. According to some analysts, its plants would have enough material stored to be able to continue for at least two weeks, although the companies did not comment on this.

The convening union, which brings together some 22,000 carriers, called for a strike on June 7 after warning for months of its intention to stop indefinitely if the Government does not extend the duration of an aid program activated in 2020 to guarantee a minimum rate of transport and whose completion is scheduled for next December 31. Truckers argue that, without this program, their income will be depleted due to the rise in the price of diesel, mainly motivated by the Russian invasion of Ukraine.

In the last round of negotiations, their representatives say that they reached a provisional agreement with the Ministry of Transport by which the Government promised to make "active" efforts to update and extend the aid program. However, the workers' federation assures that last minute objections from the conservative formation in power, the People's Power Party, prevented the signing of an agreement and broke off the dialogue.

“Our economy and industry in general are expected to suffer huge losses if logistics disruptions continue at a time when we are facing multiple challenges, such as disruptions to global supply chains and rising commodity prices. ”, said the Vice Premier of Industry, Jang Young Jin, who called for a prompt resolution to end the strike.

The strike also poses a challenge for the recently inaugurated new president, the conservative Yoon Suk Yeol. With little political experience, the former attorney general risks seeing his agenda distracted from him and alienating powerful national unions. The president has already asked his team to prepare various measures to limit the damage to industries, and the national Army has begun operating some 100 cargo trucks for containers to enter and leave the main commercial ports.