In an unexpected turn of events, for which in Moncloa they admit to having worked with "maximum discretion", Pedro Sánchez saw his purpose of unblocking the renewal of the Constitutional Court (TC) fulfilled yesterday before taking the twelve grapes. 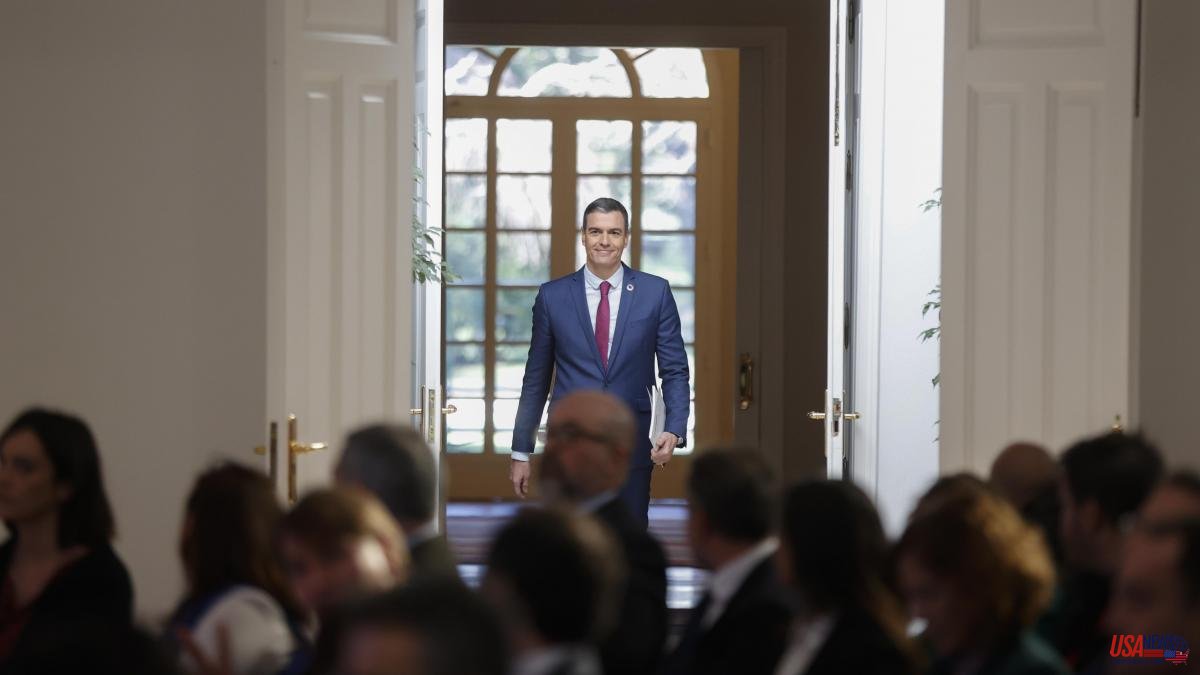 In an unexpected turn of events, for which in Moncloa they admit to having worked with "maximum discretion", Pedro Sánchez saw his purpose of unblocking the renewal of the Constitutional Court (TC) fulfilled yesterday before taking the twelve grapes.

"We have dislodged the PP, they have been knocked out", celebrated the Socialists, after the serious institutional crisis caused by the clash with the political and judicial right that tarnished the service record of which the President of the Government boasts.

"Bingo!", they sang in the Moncloa, after the agreement "unanimously" of the General Council of the Judiciary to renew the body of constitutional guarantees and give it a majority progressive sensibility, in line with the parliamentary one, compared to its current profile conservative. A key issue for Sánchez, since the TC has yet to resolve an avalanche of resources from the right against most of his government work, from the labor reform to the minimum vital income or the Euthanasia law.

"Today is a great day for Spanish democracy, for its institutions and for the Constitution", celebrated the Government. And he again directed all the lights against Alberto Núñez Feijóo: "The PP will never be able to impose its blockade against the normal functioning of democracy." Given the efforts of the current leader of the PP to keep the renewal of the CGPJ blocked, according to the same strategy that they attributed to his predecessor in office, Pablo Casado, the Socialists are raising the pressure against the main opposition party: "The only one that is missing for complying with the Constitution is the PP”.

"The Government wants the new TC to recover the prestige, objectivity and credibility damaged after the unusual decisions adopted in recent times", they assured. And they warned that "the PP's blocking of these appointments, as well as the renewal of the CGPJ, is clear proof that the main opposition party has been breaking the Constitution and the law on a daily basis." "The episodes experienced in recent days show that Feijóo and the PP have been capable of stressing democratic institutions to unsuspected limits, regardless of the prestige of the TC and its magistrates," they lamented. And they recalled the commitment expressed by Sánchez himself: "The Constitution and democracy will prevail."

"The bill has had its effect", they pointed out in the PSOE about plan B that they were preparing with the investiture block to force the renewal of the TC, an initiative that now remains in the air unless it is promoted for future situations of blocking.

The pact that leads to an express renewal of the TC was for Sánchez the best culmination of a day that began with the last meeting of the year of the Council of Ministers, which approved an extension of the "social shield" worth 10,000 million to deal with the energy and inflationary crisis. “We protect and we advance.” The president then appeared in the Barceló room –a stage reserved for big occasions–, where he made his now traditional rendering of accounts and balance of the year.

An appearance in which Sánchez presented himself, precisely, as guarantor of compliance with the Constitution. Both in Spain, before the breach of the constitutional duty to renew the CGPJ that he attributed to the PP; as in Catalonia, before the renewed demand of Pere Aragonès to agree on a referendum on self-determination.

"I have remained faithful to the commitment to the Constitution," stressed the chief executive. And he also demanded it from the PP: "The PSOE has always been within the Constitution, in the opposition and in the Government, but others cannot say the same," he made ugly.

And he again slammed the ERC demand to negotiate a self-determination referendum: "They can claim what they want, but of course it will not happen," he settled. “The Constitution does not recognize the right to independence of a certain territory. It does not fit in the Spanish Constitution or in any other in the world, ”he claimed. He also assured that this is "a debate of the past." He insisted that "the process is over", as he recalled that this was certified by Jordi Sànchez – who was the leader of the ANC until 2017 – when the government between ERC and Junts broke down.

"Independence, as a political project, goes against the times," he said. The societies of the 21st century tend to "share sovereignty", as the EU demonstrated to combat the coronavirus crisis or the effects of the war in Ukraine, and not to "compartmentalize sovereignty", as in his opinion the unilateral Catalan independence movement intends .

"Today the Constitution is fulfilled in Catalonia and the majority of Catalans, like the rest of Spaniards, are committed to coexistence, to living together," he celebrated. Sánchez guaranteed compliance with the Magna Carta and, at the same time, defended the penal reform that repealed sedition and reviewed embezzlement. "Political conflicts have to be substantiated in the political territory and not in the courts," he justified.

And, although he does not contemplate future appointments, he assured that "the dialogue table has proven to be a useful tool to convey the agenda of the reunion." He did admit, in any case, that the political conflict in Catalonia will not be resolved from one day to the next: "We will need time, patience, determination and generosity, on the part of everyone, to find a point of balance", he confided.