Russians against Putin: the 'stateless' syndrome

“A new scale of good and evil”. 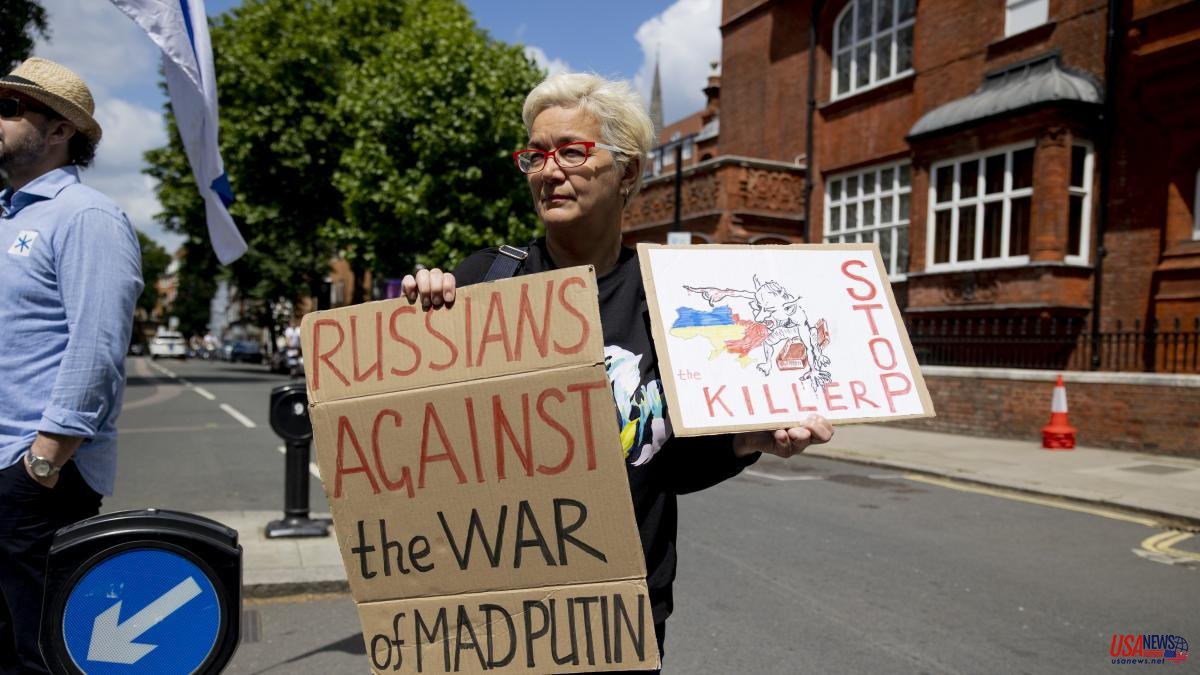 “A new scale of good and evil”. This is how Dmitri Pervushin, based in Moscow, defines the automatic emotional buffer reaction adopted by the Russian anti-war so as not to sink into a state of perpetual sadness. After several crises as a result of a police arrest, this filmmaker is "stable", "well in this new unnatural scale" that the subconscious molds like a shell to avoid major crises. "People live in this strange normality," he insists, upset.

It is a common feeling among opponents of the Kremlin and its endless chess game, all of them affected to a greater or lesser extent by a tragedy in which they play a secondary role: neither victim nor executioner, but inevitable accomplice of the second and collateral damage of the scythe.

Another Muscovite, settled in Barcelona, ​​describes the imprint of the war as “an inexhaustible noise”. At first, a purr, and then a beeping sound that bores holes in her skull and keeps her from sleeping. The change came, she says, when she went to a Ukrainian rally to condemn the invasion: “People were shouting ‘death to the enemy!’, and at that moment I realized that the enemy was me. I knew I couldn't stay, but there was something preventing me from leaving."

Vera Eroofeva has several children – hidden and countless. One, barely eight years old, is a great lover of history, which facilitates and in turn hinders his understanding of the conflict. Eroofeva, in front of the huge window of her new apartment in Sant Gervasi –she is a runaway, not poor–, says that her son's internal struggle is due to a gloomy parallelism: “He sees that we are at the same time the Jews who fled and the Nazis who were chasing them."

From the school opposite, the echo of the laughter of children who, unlike his own, flutters around the gray pavement of the patio, indifferent to a war that takes place thousands of kilometers from the peaceful neighborhood of Barcelona, ​​reaches his classroom. .

According to the Russian psychologist Sofia Belskaya, in the current situation children often reflect the state and behavior of their parents: "Emotions such as anxiety or fear are easily transmitted to other people, and young people, children or adolescents, are now more vulnerable than adults, because they rarely experience shame and guilt if it is not instilled by their elders”. The most complicated thing for them in this state of conflict, according to this professional from the Mental Health Center clinic in Moscow, is "responding to the aggression, because they belong to the aggressor's camp." Often, she insists, it is not the minor who needs psychological support, but the parents. "Our job here - she explains - is to reduce the anxiety of parents to focus on effective behavior, how to live in the new world and not lose self-confidence in this difficult period." Belskaya is the only psychologist residing in Russia who has agreed to testify among the many mental health clinics with which she has contacted this newspaper. The answer is always the same, said in a different way: "Our experts have not been able to answer your questions in such a way that the answers do not entail a criminal sanction." In an email, the secretary of the center where Belskaya works laments that "in Russia, criticism is punishable." Even people who have agreed to testify have refused to show her face in a photograph; talking is one thing, that your face occupies a page of the newspaper is quite another. They don't want to expose themselves to the gaze of the Kremlin; it is risking too much.

Back in Barcelona, ​​Eroofeva smiles cynically as she smokes a Vogue Menthol cigarette – unmistakable, longer and thinner than Spanish and a unique sign of her nationality – in front of a Sarriá bistro. "This is not a good time to be Russian," she says, crushing her half-smoked cigarette on the asphalt. She, like so many others in her situation, knows that if there is something that one cannot yet divorce, it is identity, that imprint impervious to wars, desires and shame; Nationality, much to her dismay, is a trait that shapes much of her character.

A young LGTBI activist agrees with her statement, who does not know whether to lie when asked in a supermarket if she is Russian. Her name is Mila Yuma and she, a native of southern Russia, at 24 years old, went into exile after her family was harassed by homophobic groups. She now buries her origin as an unspeakable secret and tries to alleviate her "feeling of guilt" by helping other members of the collective to escape the country.

His mother, Yuma Yuma, offers psychological help to exiled Russian-speakers in Barcelona who have volunteered to help Ukrainian refugees. "Many experience a deep emotional shock that leads to a stress disorder or the onset or exacerbation of depressive states, anxious and phobic episodes," she explains. "The war - she continues - shocks them, shakes them or destroys their image of the world, so that they do not see a viable future".

In this context, conflicts within the family or in circles of friends have intensified, often causing a definitive breakup, which only increases the discomfort. "I try not to talk about politics with other people because my opinion can get me into a lot of trouble," says Arseni Pavlov, a medical student in St. Petersburg. One of my best friends broke up with his father because they differ in opinion, my aunt has depression and it only gets worse ”.

This is how Yuma puts it: "In a situation in which the connection with our people is destroyed, when a feeling of guilt and shame overwhelms us due to the aggression of the State of which we are citizens, an intolerance to live reality arises." Add to this the threat of severe punishment in case of resistance, and the result is the degeneration of mental health and a huge increase in the suicide rate, which is already common in Russia. According to the medical journal The Lancet, more than 50% of the adult population in Russia has ever suffered from symptoms of depression, while in Europe this percentage drops to 27%.

Although the Russian shield prevents access to specific current data -if it exists-, Yuma carried out a study on a small sample (85 people) at the beginning of July to measure the psychological state of this minority of the Russian people that declares itself against the Kremlin . The results were as follows: 68.3% of the participants claimed to have lost all or part of their experience of identity with their people; 63% had suicidal thoughts, of which only 23% received psychological help; 76% find it difficult to admit that they are Russian, and 88% have a lower evaluation of their personality. 94% foresee a bleak future in Russia. The testimonies of those interviewed, as well as previous studies, seem to indicate that Yuma Yuma's numbers are not on the wrong track.

Regarding the loss of identity, Pervushin reaffirms that the Russia in which he believed died on that unfortunate February 24. "The country that saw me grow up no longer exists," he says via webcam. He is silent for a moment, lost in thought, before considering that perhaps he has always been blind: "I have not seen how cruel Russia is by nature until today." The tragedy of his people is, after all, having gone from being a peasant – the so-called mujiks – to being an economic power based on fear and, now, on the gas tap to Western Europe.

Neither Pervushin nor Eroofeva have sought psychological help; what urges the former is to leave the country as soon as possible, and the exiled Muscovite says she found her therapy as a volunteer. Who has done it is her friend Kate of her –32 years old, mother of two pipiolos in Moscow–. She does not want her last name to appear, but her testimony is forceful: "From the first day of the war I felt a great shock, panic and fear, and I knew that without help I would go crazy." Since February she has been visiting a therapist every week. “It helps me not to lose myself, to understand that I am not alone and that this is not the end,” she says. The main cause of her fear is the uncertain future of her country: “Everything I knew about this world, about myself, about my compatriots, is turned upside down, and I can't find a place for myself. What I fear most is that it seems that I no longer exist, but I am still here.