Rosalía rebaptizes the M of Motomami for that of Madrid

An audience of more than 15,000 people has felt Rosalía's appreciation for the city of Madrid. 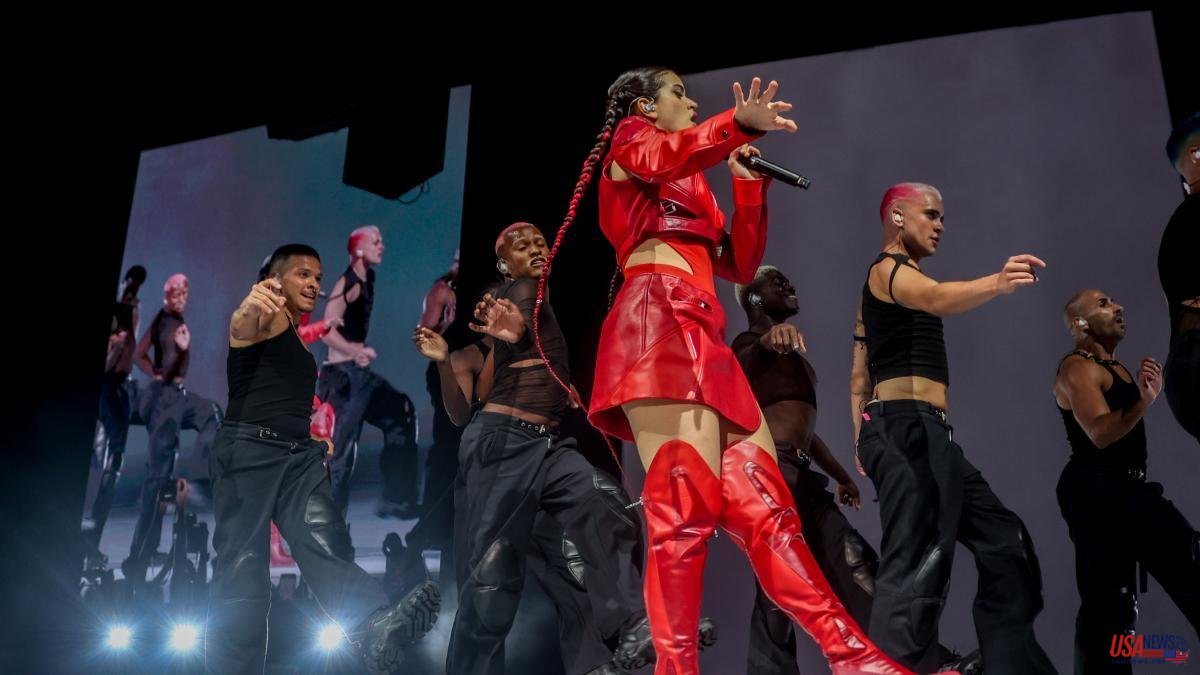 An audience of more than 15,000 people has felt Rosalía's appreciation for the city of Madrid. The artist demonstrated her talent during the avant-garde, minimalist and very audiovisual show in which she "officially" baptized a song and changed the "M for Motomami" to "M for Madrid", a city where she claims to have always felt comfortable .

With her album Motomami at the top of international critics, and considered one of the queens of popular music of 2022, she has opened in her first of two successive concerts scheduled in the capital with a striking red leather suit with side openings.

As she did in her previous shows, Rosalía showed her forceful style at last night's concert. The singer moved for an hour and a half on an almost empty stage, only accompanied by eight excellent dancers and a camera to record close-ups and broadcast them on the huge screens that flank the dance floor.

With no other visible instruments than the ones she herself played at various times, there were no musicians on stage to accompany the powerful and characteristic voice of the singer.

The concert began a few minutes after 9:30 p.m., when motorcycle noises marked the appearance on stage of the singer with her dancers dressed in luminous helmets.

Rosalía addressed the audience and even engaged in a dialogue with the mass of people, such as when she asked if she liked the title Despechá or De lao a lao better for one of the songs she presented on this tour, a query that has undoubtedly been inclined towards the first option: "Despite, right? I also like it better. It is officially titled that way," she sentenced.

"I have the best fans in the world because whatever I do you always support me, it is a blessing for me that you always support me," the singer thanked her audience of various ages, among whom were familiar faces such as the film director Pedro Almodóvar, the act Pedro Pascal, the television show Belén Esteban or the singer of Carolina Durante, Diego Ibáñez.

There were also Eva and Chloé, who attended their first concert at the age of eight and began to cry when they entered the venue, their mother explained.

"It's better than Madonna, the best concert of my life," Víctor assured at the exit, although his friend Paco (42 years old) replied that the staging had seemed "very weak"

Although some songs from her first two albums were heard: El mal Quiero (2018) and Los Angeles (2017), the vast majority of the repertoire was from her third album, Rosalía's most personal and autobiographical, Motomami, in which she mixes flamenco, reggaeton, bolero, some jazz and rap.

In his interaction with the public, he even offered the microphone to sing to some of the lucky ones who were in the front row, who surely belonged to the group that waited from early in the morning at the gates of the stadium to be able to appreciate the show from front row, and enduring the heat with fire hoses.

Rosalía stopped in Madrid as part of her Motomami international tour, in which the Catalan artist presented her third Long Play, which is already considered one of the great albums of the year by international critics.