Rosalía in Barcelona, ​​the city of motomommies 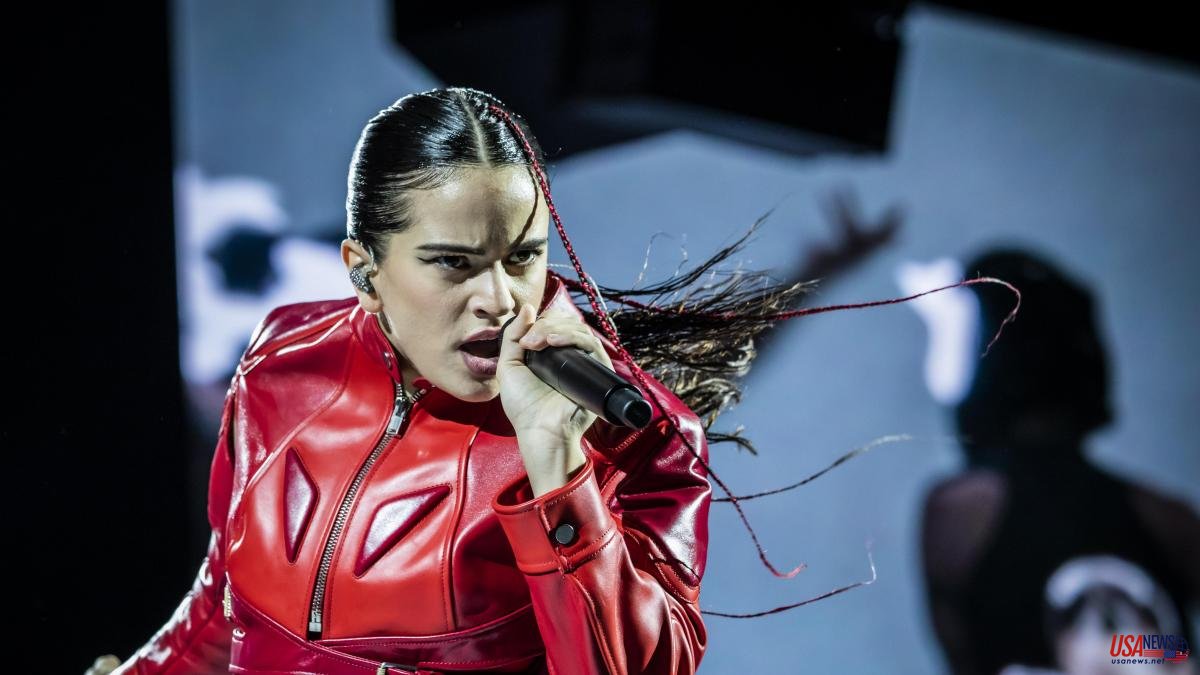 Rosalía took a break this Saturday night to cuddle with the public: "Barcelona, ​​moltes gràcies, moltes moltes moltes gràcies". The emotion in the eyes and the kisses in the wind. Rosalía misses us and I'm not lying here. Personality, self-confidence and jets of talent. Seventeen thousand souls with her sonorous breath. Miami, L.A., New York...? It is in Barcelona where she is in her element.

The artist from Sant Esteve de Sesrovires does not speak loudly, rather in a low voice: “To all of you who have heard El mal querer or Motomami, know that I am very excited to be home and sing for my people. A stage is always a sacred place but this one always makes me very happy”.

People go crazy. Her voice cracks. The thing seriously. She has not forgotten us.

The girl of fire – “as Caracol sings” and gathers herself in Bulería – devoured the stage of the Palau Sant Jordi on Saturday dressed in those red leathers, boots up to the groin, designed by Dion Lee. Her stop on her Motomami tour reached the motorized city that saw her grow as an artist. Helmet in hand, braid on the side. The Catalan has worked on Motomami's imaginary. Strong and determined girls, sensitive and independent women. The folklore and the tacky chest are over: Rosalía has discovered eroticism. Her models step firmly, hold the bike for me.

The dialogue with the public is repeated. There is trust. “Andrea, congratulations!” She exclaims when a girl tells her that today is her birthday. And at one point he lowers the provocateur and lends the microphone to two women who are certainly not singers.

The concert has started after ten minutes of the hour with the theme Saoko, which is followed by Candy, Bizcochito and Fame, the bomb theme that he recorded with The Weeknd and that sounds impressive on stage. Eight dancers exude energy to the sound of the recorded music that so many critics have reported to Rosalía: they are those who are nostalgic for live music and expect visible instruments. But Rosalía is another concept: her immense strength requires a stage.

How that fame is not going to really love her! It will not be the case in this city.

This week we have done the test at Bar El Pollo.

Why do you come here?

-Well, for this friend who has brought me.

-I have been coming since November, because I spent a day and said, there is movement here.

–Young people, very young people, Rosalía style. The place has become famous for its tortillas. It's a Basque roll, they take out the tortillas twice a day and they don't make any more.

El Pollo's tortillas were already famous before Rosalía tweeted on July 2 saying they were the best in Barcelona. In no time it was planted in the 18,600 likes and half a thousand reactions. But the rosalias were already warming him up when that happened. And the star did nothing but plunge into its environment.

"This has always been at its peak," says Jose, the tattooed manager. Rosalía brought more, and it's very good, but this is a low-profile bar."

You don't have to ask her what tortilla Rosalía ate, not again. Was she one of piquillo? "Oh, she is a human being, she came, she ate and left."

Perhaps, but a goddess does not eat, she tastes. She doesn't suffer from the heat, she fights it sheathed in leather up to her groin. Or with turtleneck sweaters like at other stops on this tour. Where did the idea come from?

In his review of his repertoire at the concert, more than thirty songs fell, counting those of the Reggeaton Medley. It mixes the current ones and others from its beginnings. He sings G3 N15, dedicated to his little nephew, who shares emotion with the arrangement he made of the already mythical Me quedo con con los Chunguitos. And he ties the black train skirt around his waist (it will be 20 meters long) and sounds very punk in De plata: torn flamenco over a guitar riff. What a force of nature.

The singer sends off at ease, shouting over the alphabet of Abcdefg , but stops to connect with m from Millonària , in Catalan. People follow him. Until the Z of… “bitch!”, shouts the public. The Combi and her roll with Versace will be next. Mighty new coin… And yet to come is her debutant Badly, the bolero Delirio de Grandeza, Chicken Teriyaki, Sakura or the one that's trailing her on this tour, CUUUUuuuuute.