If Real Madrid could have chosen a way to start the Endesa League final, it would surely be very similar to the display they put on this Monday at the Palau. 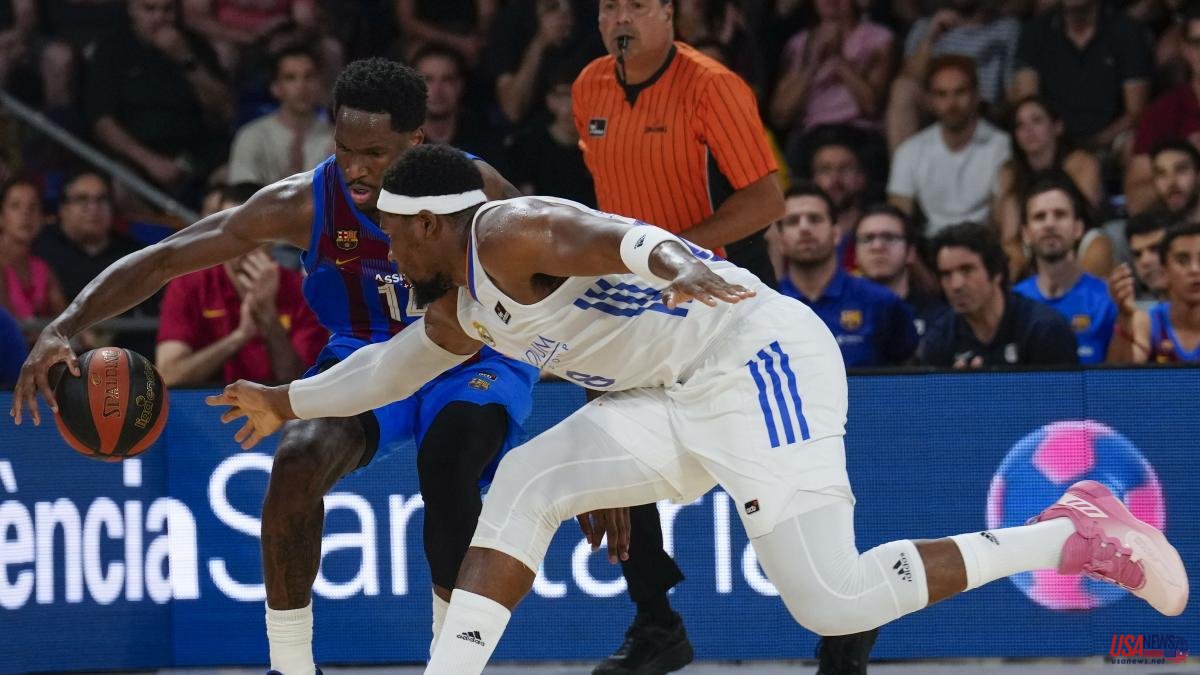 If Real Madrid could have chosen a way to start the Endesa League final, it would surely be very similar to the display they put on this Monday at the Palau. The team led by Chus Mateo in the absence of Pablo Laso signed one of the most comfortable and convincing wins in memory in Barcelona. Not only that, it sowed doubts in a Barça team that has not been exactly overconfident in recent times and that will have to hold on to its reaction in the last quarter to face the second duel with guarantees.

It was no secret that Real Madrid went into the final in magnificent form while the sensations at Barça were not the best, even though they washed their image somewhat with their two meritorious wins in Badalona. But the way Jasikevicius's side collapsed in the first half has little explanation. It was the worst Barça of the season at the worst time.

Minutes before the duel, Sanli had tested his ankle with no luck, the Turk came down at the last minute and red carpet for Tavares to impose his law against Davies and Smits. But not even Sanli's absence explains so many bad decisions made by the Catalans in a nightmarish first act against a rival in which Llull didn't play a minute either and Abalde just over one.

Mirotic scored the first five points of the match and connected with the stands, as if asking for extra help. He was going to need her team. It didn't take long for Real Madrid to settle down, starting to score triples like churros and shaking the foundations of the Palau too quickly. And it wasn't Tavares who crushed the scoreboard, well stopped by Smits, Davies reserved from the start due to his ease in committing fouls and a more than discreet state of form. Madrid combined penetrations with released shooters and hot wrists against a Barça that seemed not to know how to handle the ball. Four turnovers in four minutes irritated Jasikevicius, powerless on the wing.

The white triples began to make a dent and the differences widened soon. Hanga's shirt, an old acquaintance of the house, seemed to be worn by Stephen Curry, his ease in scoring triples and finishing plays was unheard of (16 points at halftime). Even the young Núñez joined the white party and raised the 15-28 even in the first quarter. Madrid was erasing Barça from the track. It was an irrefutable fact. The referees allowed him to defend hard but also his rival, who did not know how to take advantage of it.

Again, as happened in the first act, there was a mirage to start the second quarter. He stole the Laprovittola ball on the first play and scored a triple. The Barça public shouted hopefully, with a point of naivety because the avalanche was going to continue. Too many times, Barça's offensive plays end up in the hands of Hayes, a bad sign for the azulgrana, and in defense, rather than making waters, the locals drowned in an ocean. The horrific injury to Randolph, who received a standing ovation from the Palau, paused the game but did not change the picture. Poirier did what he wanted and with an additional free throw he scored 29-49, which deserved little more explanation.

Little more than the heroic remained even Barça aimlessly and without ideas. Calathes, Higgins and Mirotic entered the track at the same time, the trident called urgently in pursuit of the miracle. Kuric had also finally shown signs of life in this playoff. But the mission was for Tom Cruise and not for the Barça team, which was not only incapable of deactivating Madrid but also gave them one gift after another. He took the Palau with the referees, surely because he was not forced to look in the mirror and take it with his own. A free throw by Núñez confirmed the debacle with a fourth still to be played (51-74).

Then a hungry Barça appeared for a while, coinciding with Jokubaitis's first appearance in several games, culminating in a 12-0 victory by the Lithuanian that allowed a halo of hope to enter the Palau. But the forces were not enough for the azulgrana who, despite not knowing how to close the defensive rebound, held the score and concealed a defeat that deserved to be more forceful.

The final began in white but the road to the title is still very long. And they both know it.

Incidents: First match of the Endesa League finals played at the Palau Blaugrana in Barcelona before 6,759 spectators.