Barça got what they wanted. 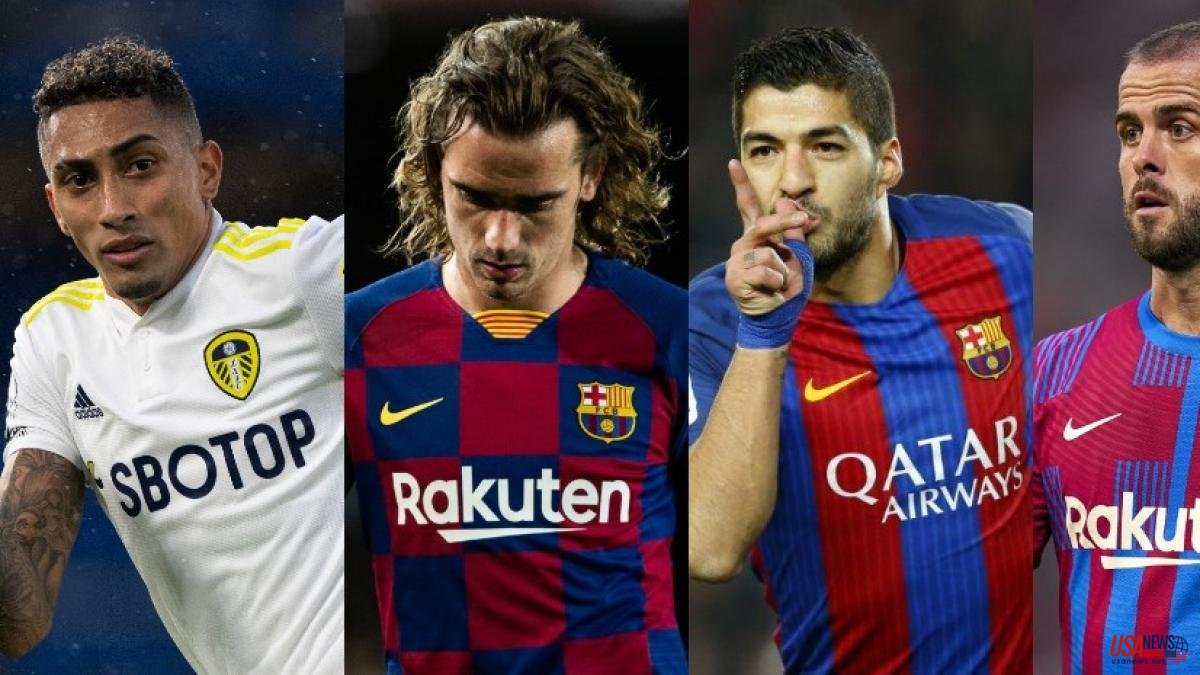 Barça got what they wanted. Wingers were a priority for Xavi and the club has responded with three 'signings' for that position in half a year. If Ferran Torres landed in the winter market, this summer it has been the turn of the semi-unknown Raphinha and also of the 'resigned' Ousmane Dembélé, who after running out of a team has finally decided to accept the blaugrana offer on the downside, with a salary of 40% minor.

Both Ferran and Raphinha and Dembélé appear on the list of the ten most expensive Barça signings ever, a ranking in which attackers predominate. Some of them left an indelible memory in the club for their extraordinary performance. Others, on the other hand, will be difficult to forget but for opposite reasons.

The Valencian footballer was the first major investment in the second Laporta era. Barça reached an agreement with Manchester City at a rate of 55 million plus 10 in variables if ambitious goals such as winning the Champions League or winning the Ballon d'Or are met. In his first months as a Blaugrana he had many ups and downs. He has to be more constant to consider his signing as good.

A Brazilian at the price of crack. This is how Raphinha arrives in Barcelona after two seasons at a high level at Leeds. Despite the strong interest from other clubs such as Chelsea, the player has committed until 2027 with the Catalan entity in exchange for 58 million plus 9 in variables.

The Bosnian enters the list for one of the most bizarre operations carried out by the Bartomeu board. To balance the balance, before the end of the 2019/20 season there was the Pjanic-Arthur barter with Juventus and the midfielder was valued at 60 million. His time in the Catalan capital has been to forget. This summer he has returned after an unsuccessful loan at Besiktas, where he was sent due to his poor performance and for not getting along with Koeman.

The Swedish striker was an express request from Pep Guardiola after the 2009 treble. He got rid of Samuel Eto'o, who ended up at Inter, to bring in Ibrahimovic, a footballer who is as talented as he is controversial. He performed well in the first round of the 2009/10 season, but his scuffle with the Catalan coach and Messi's consecration as a false 'nine' condemned him to ostracism. He ended up with Bojan removing his position.

The arrival of the Uruguayan was not without controversy. Chiellini's bite at the World Cup prevented him from debuting with Barça until the end of October. Although it was difficult for him to find the goal, when he did, he did not stop. 194 goals in six years make him the club's third all-time top scorer.

The illusion that the Dutchman aroused has been declining over time. There is still no unanimity regarding his performance in his three seasons at the Camp Nou. He has supporters and detractors alike, but almost everyone agrees that the level of the team has not favored him. He has also had a hard time taking the step forward. He is indisputable for Xavi but the club urgently needs to sell him to register the new signings. If he leaves he will always be left with the thorn of not having been fully taken advantage of.

It is difficult to know exactly the price that Barça actually paid for the Brazilian winger. According to the Transfermarkt portal (reference in the price of almost all the transfers on this list), it cost 88 million, although the dance of figures is confusing. In 2013, 17 million were paid to Santos and after endless legal trouble, between commissions and bonuses, there is talk of having exceeded more than 150 million. Of what there is no doubt is the quality of Neymar. In those four years he was a secondary actor of luxury for Messi until he decided to go to Paris for 222 million in order to stop being the shadow of the Argentine. They have been playing together since last year.

The podium of terror begins. 415 million in three footballers who have not convinced during their time at the Camp Nou. Griezmann was paid 120 million a year after he gave the club pumpkins through a documentary in which he made a fool of himself. He arrived in the summer of 2019 and left the club two years later with more sorrow than glory, playing half depressed and without understanding Messi. He is still owned by Barça, but plays on loan at Atlético de Madrid. The clubs agreed to a loan season plus another with a mandatory purchase option of 40 million if the Frenchman plays more than 40% of the minutes.

Barça, with fresh money from the sale of Neymar, went to look for a substitute for him in the market and found exorbitant prices. He paid 105 million to Dortmund for the French winger and another 40 were subject to his performance. Only 10 million variables have not been paid. The clause was to win the Champions League twice in a row... At 25 years old, Dembélé will have to show much more in his second spell than he did in the first.

Misfortunes never come alone. Dembélé was accompanied a few months later by Coutinho. It was in January 2018 when Barça paid Liverpool 120 million plus 40 in easily compliant variables. The level shown was a constant disappointment since its arrival. He arrived as the substitute for Iniesta but the reality is that he never got to adapt, neither in the interior position nor in the extreme. He weighed the price of it and couldn't deal with the pressure, growing more and more dejected. The assignment at Bayern did not spur him on either and he ended up at a mid-table club like Aston Villa sold for 20 million.